TIPPING OFF: Zion back for Duke rematch with Virginia Tech 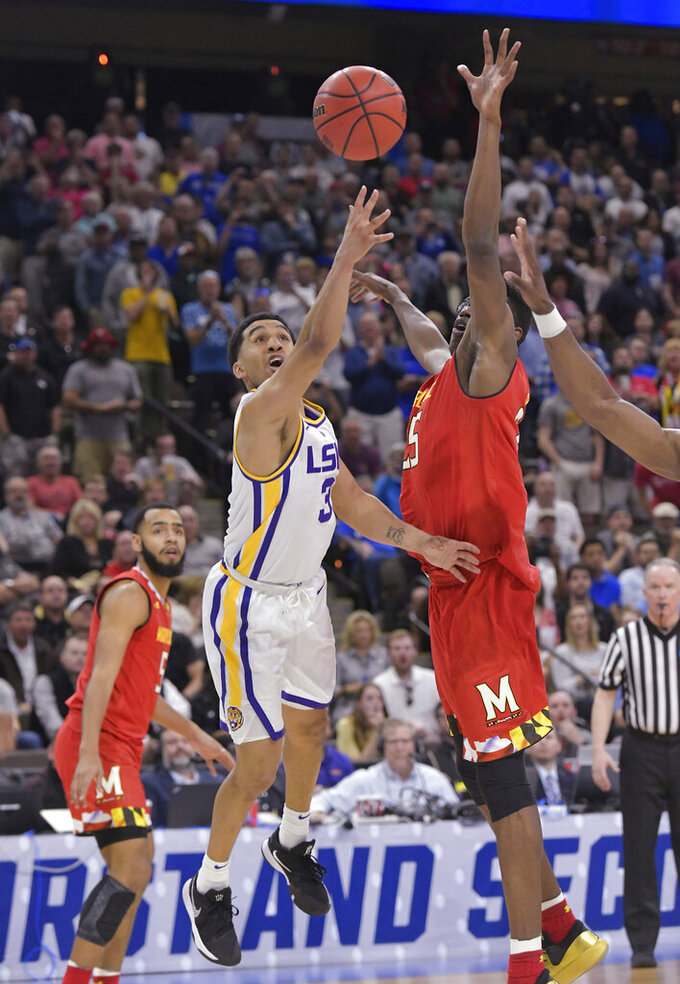 LSU guard Tremont Waters (3) makes the game-winning shot as Maryland's Jalen Smith (25) defends during the second half in a second-round game in the NCAA men’s college basketball tournament in Jacksonville, Fla., Saturday, March 23, 2019. (Will Dickey/The Florida Times-Union via AP) 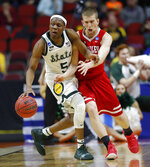 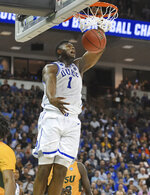 Zion Williamson is back for a rematch in the Sweet 16 against one of the four teams the Blue Devils lost to this year.

Duke gets Virginia Tech on Friday night in the NCAA Tournament, a team that beat the Blue Devils in February. That game was played without Duke's flying freshman, and R.J. Barrett played sick.

Virginia Tech has victories against Duke in each of the past three seasons, and won't be intimidated by the tournament's No. 1 overall seed.

"I don't think we're excited for the moment," Virginia Tech point guard Justin Robinson said. "I think it's just another game for us. And I think we're going to be ready for whatever is going to come for us to end the game."

The rematch in the East Region semifinals will certainly have a different feel.

Duke (31-5) is the bracket's No. 1 overall seed and playing in its 25th Sweet 16 under coach Mike Krzyzewski after beating Syracuse and surviving UCF. Williamson is healthy and dominating again following his knee-spraining shoe blowout.

No. 4 seed Virginia Tech (25-8) got Robinson (foot) back just in time to beat Saint Louis for its first NCAA Tournament in 12 years and reached the Sweet 16 for the first time since 1967 with a victory over Liberty.

"We should know based on the history of March Madness that it doesn't matter what the ranking is," Williamson said. "The game is completely different. It's different stakes now."

Outlaw is expected to play after being charged with possession of marijuana because of an incident at his residence while he was with the team in in San Jose, California, during the first weekend of the tournament. Coach Buzz Williams says Outlaw took a drug test after the team learned of his arrest and it came back negative.

POINT GUARD SHOWDOWN: The NCAA Tournament had a superb point guard duel in the opening round between Murray State's Ja Morant and Marquette's Markus Howard.

Another one comes Friday in the East Region, when LSU's Tremont Waters squares off against Michigan State's Cassius Winston City.

Winston was the Big Ten player of the year, averages 18.9 points per game and was third nationally with 7.5 assists.

Waters was the SEC co-defensive player of the year after finishing third nationally with 2.97 steals per game. He averages 15 points and 5.9 assists per game. He also hit the winning shot with 1.6 seconds left to lift the Tigers over Maryland in their NCAA opener.

"That's what we play for — to go out there and play against the best, but you can't get caught in the individual," Winston said. "He does a lot for his team, I do a lot for my team. If we're winning, there's a pretty good chance that we're playing well for our team."

WASHINGTON'S STATUS: Kentucky won its first two NCAA Tournament games despite playing without PJ Washington due to a foot injury.

The second-seeded Wildcats still don't know if their sophomore forward will be able to play against Houston in the Midwest Region semifinal Friday in Kansas City.

"I feel good," Washington said. "It's just about going out there and seeing if I can do stuff on the court. I haven't put any pressure on it yet."

Washington is a key cog for a Kentucky team trying to reach the Elite Eight for the seventh time in 10 years. He averages 14.8 points and 7.5 rebounds, is an adept passer and is a leader for a young team.

TIGERS AND HEELS: Friday's South Region game between top-seeded North Carolina and No. 5 Auburn should be the polar opposite of the low-scoring games Thursday night.

North Carolina averages 14.6 seconds per offensive position, fifth-fewest nationally, and is third in Division I with 86 points per game.

"They're faster than anybody we've played against," Auburn coach Bruce Pearl said.

Auburn has hit the fourth-most 3-pointers in Division I history with 421 and uses its pressure defense to create waves of baskets in transition. Kansas found out the hard way how quickly the Tigers can get rolling, falling behind 17 points before the first half was halfway over.

"It's kind of weird because you think about getting back in transition, (you) think about protecting the basket," North Carolina's Kenny Williams said. "They like to run to the 3-point line and get those 3s in transition. You've got to make some adjustments."

One thing's for sure: it's going to be fun to watch.