Title trophy in hand, Virginia has look of perennial power 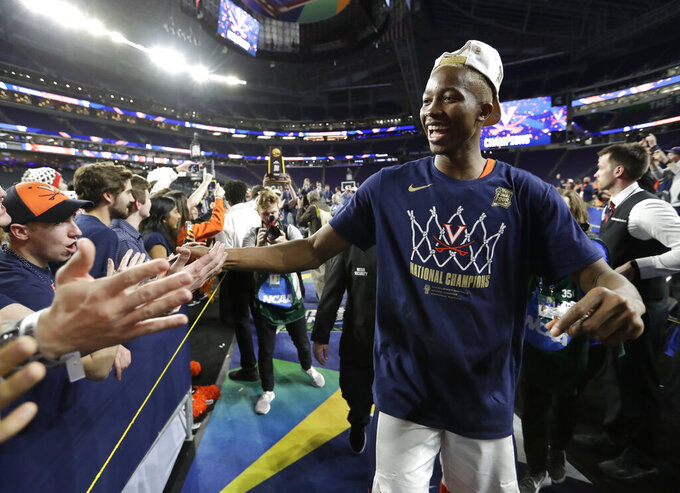 MINNEAPOLIS (AP) — Kyle Guy had every reason to look toward next season the moment last season ended, a stunning and humiliating loss to UMBC in the NCAA Tournament forcing him into what he called "a dark place."

Instead, the junior guard ruminated over the loss for weeks.

Guy might want to dwell on the way this year's tournament ended even longer, basking in an overtime victory over Texas Tech in the national championship game Monday night that was equal parts absolution and retribution. But when he finally does turn his attention toward next season, he will face this reality : There's a good chance Virginia could be right back in the finals again.

The bulk of their lineup will return intact, hardened by both uplifting victory and soul-crushing defeat. They'll be joined by a pair of top-100 prospects, and they will have the confidence of winning a series of nail-biters on college basketball's biggest stage.

"As soon as the buzzer sounded (last year) and we were done with the press conference and stuff, we knew we all had the same goal in mind for next year, and that was to win a national championship," Guy said. "To battle everything we battled through and come out on top is a fantastic feeling."

In college basketball, though, every ending is a new beginning. That was the case when the Cavs were bounced by UMBC a year ago, and it was the case again Monday night .

Multicolored confetti was still swirling inside U.S. Bank Stadium, and the party still going on in the locker rooms, when oddsmakers in Las Vegas made the Cavaliers the betting favorites for next season. Caesars Palace had them at 5-1 odds, while the Westgate Las Vegas SuperBook followed suit by installing Virginia and Kentucky as co-favorites at 7-1.

If the Cavaliers pulled off a title defense, it would be the first time since Florida in 2007.

The reason for that optimism? Simple. The Cavaliers return just about everybody.

Yes, sophomore standout De'Andre Hunter is almost certainly off to the NBA, especially after a career-high 27 points in the Cavaliers' 85-77 win over the Red Raiders . Junior guard Ty Jerome could join him in declaring for the draft, though he is considered a fringe first-rounder.

Otherwise, the only loss to graduation is Jack Salt, a role player off the bench.

Guy should be back for his senior year after a starring turn at the Final Four, and so should Mamadi Diakite, the versatile shot-blocking forward. Point guard Kihei Clark will be back with a year of experience, and top reserve Braxton Key could slide into a starting job.

The team that had never won a title could be staring at the prospect of two straight.

"When they came on the recruiting visit, I remember telling them, 'Look, the foundation has been laid by guys — Joe (Harris) and Malcolm (Brogdon) were here and all the guys who went before," Virginia coach Tony Bennett said. "We had won some ACC championships, we've been to the Elite Eight. I said, 'We're asking you to build on that foundation. That's going to be the hardest step."

As hard as it is to win a championship, repeating is often tougher. The Cavaliers will get everyone's best shot every night out — if they didn't already. And the ridiculously deep ACC will be loaded again with Duke landing another top-notch recruiting class, North Carolina overflowing with talent and a handful of other programs also on the rise.

They already have signed a pair of top-100 prospects in Casey Morsell, a high-scoring guard from the Washington, D.C., area, and 6-11 forward Kadin Shedrick. Both had scholarship lists of more than a dozen deep, yet they chose to join a budding dynasty at Virginia.

The Cavaliers have been to six consecutive NCAA Tournaments. They've won a pair of regular-season ACC championships over the same span. They just won a school-record 35 games and capped it all off by hoisting the national championship trophy on Monday night.

"Yeah, we came in together and said that we were going to win a national championship," Guy said late Monday night, "and to be able to hug each other with confetti going everywhere and say we did it, it's the greatest feeling I've ever felt in basketball."