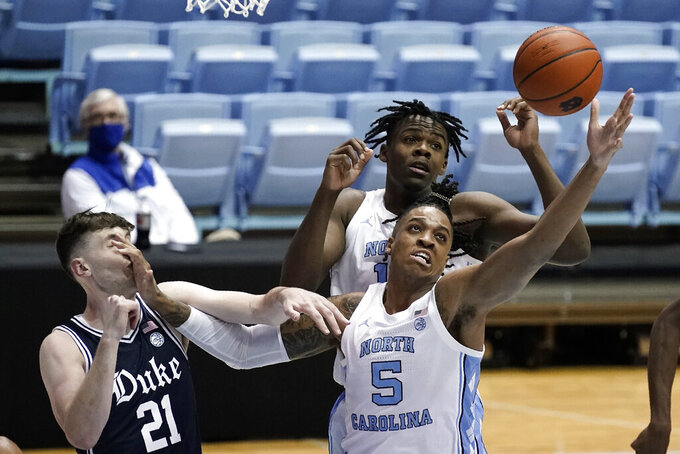 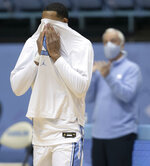 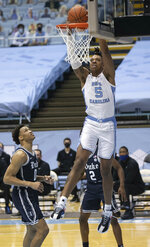 CHAPEL HILL, N.C. (AP) — Duke and North Carolina have a way of capturing national attention with every meeting — and with the national championships, Hall of Fame coaches and tradition-rich histories, it's no wonder.

Saturday's 91-73 win by the Tar Heels lacked the usual high stakes in the storied rivalry. Neither is in contention for an Atlantic Coast Conference regular season title, and neither is going to sniff a No. 1 seed in the NCAA Tournament.

Instead, both programs are trying to claw out a tourney bid with young, unranked teams. The Blue Devils in particular have work to do entering next week's ACC Tournament.

“I think now the biggest thing is just to believe in ourselves,” Duke freshman big man Mark Williams said. “I mean, that's the biggest thing. Everyone's going to be doubting us, but at this point, it's us against everybody.”

Underdog Blue Devils — who would have thought?

UNC won last month 91-87 in a fan-less Cameron Indoor Stadium in a game that came down to the final seconds. There was no drama this time, with UNC jumping to a 26-6 lead and going up 24 points.

Senior Garrison Brooks has been part of Duke-UNC games with both teams highly ranked Final Four contenders. From the inside, he said, it felt no different Saturday.

“Nah, it never does,” said Brooks, who had 14 points and two 3-pointers in his final home game. “That game is always — no matter what the records are, it’s always going to be a sight to see.”

Yet this rivalry setting, with limited fan attendance due to COVID-19 protocols, was another unusual piece to a strange postponement-filled season. It felt a long ways from those star-laden matchups of past years with NBA-bound names like Zion Williamson, Coby White, Jayson Tatum and Harrison Barnes, among others.

Consider the last time the Blue Devils and Tar Heels closed in Chapel Hill. UNC won that 2019 game to clinch a share of the ACC regular season title, though Duke won a rematch in an ACC Tournament classic the following week. Both went on to earn No. 1 NCAA seeds.

Two years later, the Tar Heels and Blue Devils met twice in a month with neither in The Associated Press men’s college basketball poll, the first time both were unranked in consecutive matchups since February 1955.

The Tar Heels got a boost for this one from more than 3,200 mask-wearing fans allowed to attend after Gov. Roy Cooper recently eased public-gathering restrictions. Those fans were scattered through the massive Smith Center, some sitting behind rows of fan cutouts that have there all season.

They were treated to the Tar Heels rolling from the opening minute. There was even some chants of “NIT! NIT!” toward the Blue Devils with about 5 minutes left, which prompted UNC coach Roy Williams to immediately wave his arms for them to stop from the sideline.

The win secured the No. 6 seed for the Tar Heels (16-9, 10-6) in the 15-team ACC Tournament in Greensboro, and UNC looks to be on solid footing for securing an NCAA bid.

The Blue Devils (11-11, 9-9) dropped to No. 10 for the lowest seed in program history. That sent the 21-time champions into Tuesday's game against Boston College in a round typically reserved for the league's six lowest seeds, and facing the prospect of winning the tournament to avoid missing the NCAAs for the first time since 1995.

“I need to help them more confidence-wise and just coaching-wise, so that they can turn this around,” Duke coach Mike Krzyzewski said.

“They have good attitudes. Our practices are good. They're good kids. But did we play well? No. Did I prepare them well? No. ... I didn't help them enough, and that's my responsibility. I'm going to do try to do what I can to help them play well on Tuesday, and not look at anything else.”