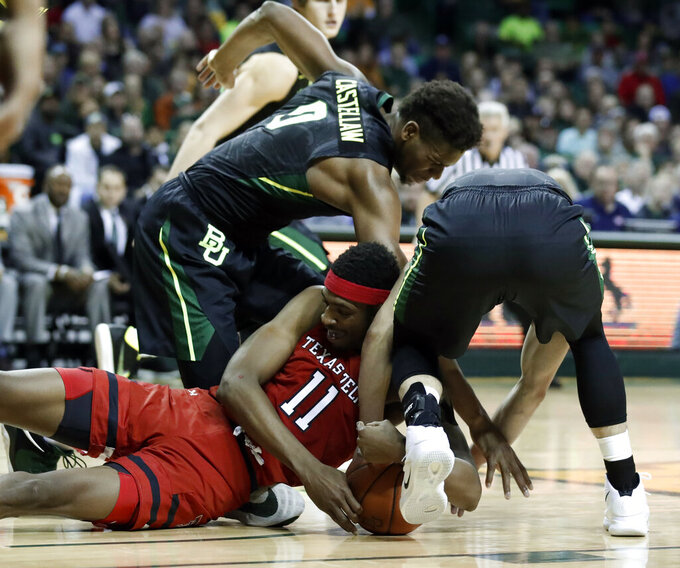 The headliners in the AP Top 25 couldn't avoid the stumbles that had befallen their lower-ranked poll peers a week earlier, from top-ranked Duke's home loss to Syracuse to the nation's last two unbeaten teams — No. 2 Michigan and No. 4 Virginia — falling for the first time.

The Blue Devils' overtime loss to Syracuse on Monday night, followed by the Wolverines' loss at Wisconsin, could lift third-ranked Tennessee to No. 1 for the first time since 2008.

The Volunteers (16-1, 5-0 Southeastern Conference) have won 12 straight, the program's longest streak since the 1977-78 season, since falling to No. 7 Kansas in overtime in New York on Nov. 24. Tennessee beat Arkansas and Alabama in the past week.

"It's definitely something that, we would definitely love to be in that position for sure. Who doesn't want to be No. 1?" junior guard Jordan Bone said. "But we're not focused on that. We're focused on what's in front of us."

The Syracuse loss came while missing freshman starter Cam Reddish (illness). Then the Blue Devils lost freshman point guard Tre Jones — the critical cog to their defense with his relentless on-ball presence — to a first-half shoulder injury that will sideline him indefinitely.

Yet the Blue Devils came up with a few adjustments leading up to the visit from reigning league champion Virginia. They made defensive switches from positions 1 through 5 on screens for the first time. They also threw some zone-defense looks at the Cavaliers in the second half.

Ultimately, Duke won a tight fight to the horn against the No. 1-ranked team in the coaches' poll, KenPom and the NCAA's NET rankings.

"I'm not saying it's the cat's meow here or a new invention or anything," coach Mike Krzyzewski said of the defensive switches. "But you have to do a little something different."

Virginia has been one of the nation's most efficient offenses, which might go overlooked by some with the Cavaliers playing a clock-controlling pace that leads to fewer possessions and lower scores. And offense generally wasn't a major problem in the Duke loss — except in one area in particular.

The Cavaliers arrived in Durham shooting nearly 41 percent from 3-point range but made a season-low 3 of 17 in Cameron Indoor Stadium. By comparison, Virginia had made 10 of 23 against Clemson and 13 of 24 in Monday's rout of No. 9 Virginia Tech in its last two games. And it hadn't had fewer than four in any game this season before Saturday.

Virginia shot 53 percent for the game despite those struggles, including 69 percent inside the arc.

The loss offered Cavaliers coach Tony Bennett a teachable moment even with a veteran team that swept last year's ACC regular-season and tournament titles: "That's where your soundness defensively, defensive rebounding, taking care of the ball, has to be at a high level."

As for the players, juniors Kyle Guy and Ty Jerome talked about it being a missed opportunity.

It had been a long time since Michigan lost a regular-season game before the trip to Wisconsin.

The Wolverines (17-1, 6-1 Big Ten) fell at Northwestern on Feb. 6 last year, then won five straight games to close the regular-season schedule. Their only loss since had been to Villanova in last year's national championship game.

But Michigan shot just 41 percent and committed 16 turnovers in Saturday's loss to the Badgers.

"That's a hell of a run, and now it doesn't mean anything," Michigan coach John Beilein said. "We've got to go back and figure out a way to beat Minnesota on Tuesday.

Four AP Top 25 teams lost twice this week, with No. 8 Texas Tech being the highest-ranked of the group. The Red Raiders (15-3) lost to Iowa State and Baylor after a 4-0 start in Big 12 play.

The other two-loss ranked teams were No. 11 Florida State (losses to Pittsburgh and Boston College ), No. 20 Oklahoma (Kansas State and Texas ) and No. 25 Indiana (Nebraska and Purdue , each by 15-point margins).