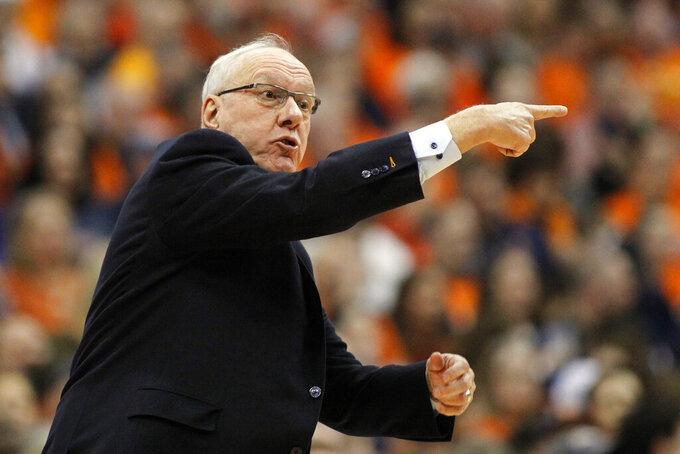 FILE - In this Feb. 23, 2019, file photo, Syracuse head coach Jim Boeheim directs his players during the first half of an NCAA college basketball game against Duke in Syracuse, N.Y. Boeheim has five freshmen on the roster as he prepares for his 44th. (AP Photo/Nick Lisi, File) 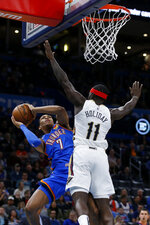 Precious Achiuwa wanted to be part of Memphis' No. 1-ranked recruiting class and fulfill his family's hope that he would attend college before pursuing an NBA career.

He also knew there were other options that didn't include college.

With the NBA draft age limit still in place, some recruits have bypassed a one-and-done college season to play professionally overseas. Others have opted to train for the draft away from the spotlight of campus rivalry games and the NCAA Tournament. There's even the possibility of playing in the NBA's developmental G League for a six-figure contract.

It's unclear whether any of those options will dramatically change college basketball considering most players still end up at the collegiate level, though a handful of potential college stars have choose to skip school with more likely to follow.

"I think it's whatever you feel comfortable with or whatever you think is going to help you moving forward, advancing your game or whatever it is you're looking for," said Achiuwa, a five-star recruit for 14th-ranked Memphis. "It depends on the individual, to be honest.

"There's no set way to do it at this point anymore."

Indeed, and more players are exploring alternatives to college basketball.

R.J. Hampton, the nation's No. 5 recruit according to 247sports.com, passed in May on playing for Kansas, Memphis or NCAA runner-up Texas Tech this season. Instead, he's playing in the Australia-based NBL in that league's "Next Stars" program to attract elite NBA prospects.

That NBL route includes LaMelo Ball — who played previously in Lithuania and is the third brother from the family known for the "Big Baller Brand" apparel company — and Terry Armstrong, a four-star recruit who passed on playing for Arizona this season.

The G League has its own "select" contracts for top prospects paying $125,000, though a player has yet to opt for that over college.

Second-year Portland Trail Blazers guard Anfernee Simons was a first-round pick who skipped college as a top-10 recruit to play a post-graduate year at IMG Academy in Florida.

Then there's the path of Oklahoma City Thunder rookie Darius Bazley. He bypassed Syracuse last year to train for the draft — he originally planned to play in the G League — and was the 23rd overall pick in the first round of the NBA draft in June. That's the plan now for MarJon Beauchamp, this year's 27th-ranked recruit who announced in August he would spend next year training for the 2021 draft.

"I definitely think those guys are the exception," Auburn forward Anfernee McLemore said. "They're obviously awfully phenomenal athletes to have the ability to do that."

"Obviously not going to school, you didn't have to worry about class or anything else," Bazley said before his NBA debut at Utah. "I just focused on myself, my body and my game."

Not surprisingly, college coaches believe at least a year in school remains the best option.

Kentucky coach John Calipari prefers players be allowed to jump directly from high school to the NBA, but he pointed to the value of getting a college education, even if for a short time.

"My thing is: if they don't go pro, we — all of us — should encourage them to go to college," Calipari said. "I don't care if they stay one year or two years, whatever it is."

Judging by recent NBA drafts, playing college basketball — particularly in a Power Five conference — looks like the best way to land in the league.

"There's certainly a growing opportunity in the G League or going overseas," Favorito said. "There's still nothing like being on TV on Fox Sports or ESPN or having your story told with some really vibrant social media platforms today (at colleges). ... It gives you the chance not just to be a great athlete, but to tell your personal story like nowhere else. And that's sometimes hard to do if you're doing it on your own."

Things will change if the NBA and its players go forward with plans to lower its draft age limit from 19 to 18, reopening the doors for high school players to go directly to the league. That could happen by the 2022 draft, a change backed by the Condoleezza Rice-led Commission on College Basketball created after a federal corruption investigation into the sport.

Until then, Syracuse Hall of Fame coach Jim Boeheim and ACC Commissioner John Swofford are among those who don't view the alternatives as a threat to the college game.

As Swofford put it: "College is not for everybody."

Boeheim pointed out there are 4,000 guys that want to play college basketball, so losing a handful will not be the detriment of the sport."