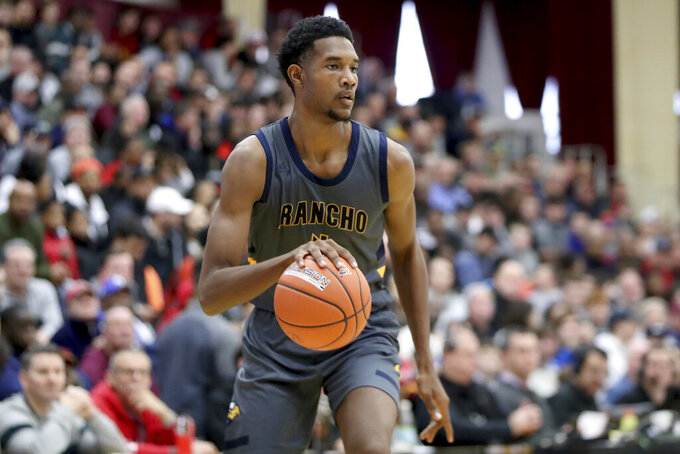 FILE - In this Jan. 20, 2020, file photo, Rancho Christian's Evan Mobley controls the ball against DeMatha during a high school basketball game at the Hoophall Classic in Springfield, Mass. Among the slew of new players on Southern California’s roster, Mobley stands out. He joins the Trojans as one of the nation’s most hyped freshmen and figures to make an immediate impact on a team seeking a breakthrough. (AP Photo/Gregory Payan, File)

LOS ANGELES (AP) — Among the slew of new players on Southern California’s roster, Evan Mobley stands out. He joins the Trojans as one of the nation’s most hyped freshmen and figures to make an immediate impact on a team seeking a breakthrough.

Entering coach Andy Enfield’s eighth year, the Trojans haven’t been to the NCAA Tournament since 2017. That’s when they fell just short of the Sweet 16 in their second appearance under him.

The Trojans lost 84% of their scoring and 73% of their rebounding from last season, leaving Enfield with several holes to fill. USC was 22-9 overall and 11-7 in the Pac-12.

Mobley, a 7-footer, joins his older brother Isaiah in the Trojans’ frontcourt, replacing Onyeka Okongwu, who left early for the NBA draft, and Nick Rakocevic, who graduated. Isaiah Mobley averaged 20 minutes as a freshman. Their father, Eric Mobley, is an assistant to Enfield.

“We think this is most talented frontline that we’ve had,” Enfield said.

The Mobley brothers played together in high school in Temecula, California, and on a powerhouse traveling team.

“Me and him have a good connection,” Evan Mobley said. “On the court, we have a lot of good plays throwing alley-oops to each other.”

Evan Mobley has impressed guard Ethan Anderson, the most experienced returning player. He led USC in assists (4.2) and started 28 games as a freshman.

“He’s an absolutely amazing player,” Anderson said. “Some of my passes to Evan I don’t even have to look. I just have faith he’s going to get it.”

Catch him while you can, though. Evan Mobley is expected to be a one-and-done player before heading to the 2021 NBA draft lottery.

“Even though he’s spectacular, he’s so enthusiastic about trying to get better,” Enfield said. “He knows he’s not a finished player.”

The Trojans lost a ton of talent, including Okongwu, who led the team in scoring, rebounding and blocked shots. Rakocevic and guard Jonah Mathews, who both averaged double figures, graduated. Elijah Weaver transferred to Dayton, Kyle Sturdivant transferred to Georgia Tech, and Quinton Adlesh and Daniel Utomi graduated.

The Trojans have more than just the Mobley brothers in their frontcourt, which sustained the heaviest loss of talent. Max Agbonkpolo played in 24 games last season. He’s joined by 6-foot-10 Boubacar Coulibaly, a native of Mali who played high school ball for three years in the Los Angeles area. “He's really surprised us with his ability to offensive rebound and affect the game with his energy,” Enfield said. “He'll give us high energy off the bench.” At 6-9, Chevez Goodwin is a transfer from Wofford, where he started on the South Carolina school's NCAA Tournament team in 2019. Isaiah Mobley averaged 6.2 points and 5.3 rebounds as a freshman. He'll play a bigger role feeding his brother in the post, which could lead the older Mobley to a breakthrough season. “I like this team and how unselfish we are,” Anderson said.

Anderson is joined by Noah Baumann, who is eligible after transferring from San Jose State. Baumann will be the Trojans' main 3-point shooter. He hit 45% from long-range last season for the Spartans. He made 45 career starts at San Jose State over two seasons. Anderson gained valuable experience through playing a lot last season. “I've been able to find this new confidence in myself. The coaching staff is trusting me," he said. “This year, if the defense is giving me that jump shot, I’m going to take it.”

The Trojans are waiting to learn the status of guard Drew Peterson, who transferred from Rice. The junior started 65 games in two seasons at the Texas school, and averaged 11.1 points last season.

Because of changes due to the coronavirus, there are no exhibition games. As a result, the Trojans have staged a couple of scrimmages using Pac-12 referees.

USC’s reworked schedule has yet to be finalized. However, the Trojans are set to open the season at home against Cal Baptist on Nov. 25. They’ll travel to Uncasville, Connecticut, to play BYU on Dec. 1 as part of a four-team “pod” in what’s being called Bubbleville, with teams from multiple conferences playing at Mohegan Sun Arena. UConn and Vanderbilt are in the same pod as USC.