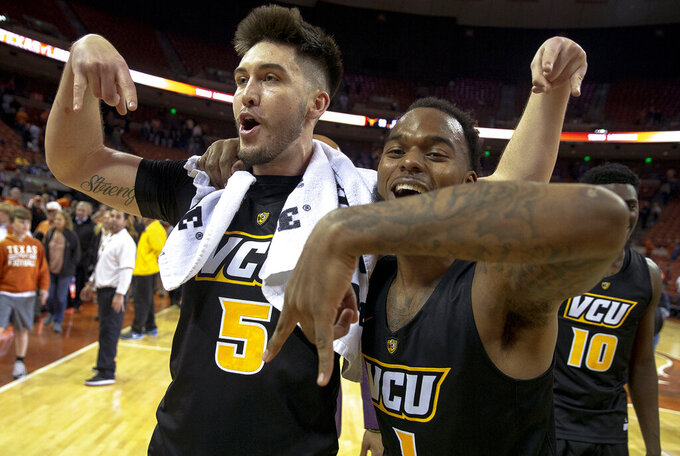 FILE - In this Wednesday, Dec. 5, 2018, file photo, Virginia Commonwealth forward Sean Mobley (5) and guard Mike'L Simms (1) throw the "Hook 'Em Horns" sign down after defeating Texas 54-53 in an NCAA college basketball game in Austin, Texas. The Rams have 25 wins and are the top seed in the Atlantic 10 men’s basketball tournament. (Nick Wagner/Austin American-Statesman via AP, File)

RICHMOND, Va. (AP) — VCU coach Mike Rhoades has never had to look far this season for a way to motivate the Rams.

He routinely reminds his players that they were picked to finish in the middle of the Atlantic 10 standings.

The Rams (25-6, 16-2 A-10) not only won the league regular season title, they became first team to win 16 league games since George Washington in 2005-06. They head into this week's conference tournament at the Barclays Center as the top seed, but still with plenty of doubters.

"There are a lot of people still not picking us to win the tournament," said Rhoades, who on Tuesday was voted the league's coach of the year in just his second season at VCU. "So be it. I think we've had an approach all year long of ... we have to be who we are and one thing we talked about is being the hunters all the time."

The Rams will be the hunted in New York, primarily as the lone A-10 team likely to get selected for the NCAA Tournament without cutting down the championship nets on Sunday. But "the underdog thing," as guard Marcus Evans describes it, is something they will carry with them into their first game Friday.

"We've embraced the fact that people have underestimated us," said Evans, an All A-10 first-team selection who followed Rhoades from Rice when he was hired at VCU two years ago. "It's allowed us to get back to, like coach Rhoades says, the hunter's mentality that VCU had for so many years."

Along with a return to the defensive style known as 'havoc' that was so integral to the Rams' run from the First Four to the Final Four in 2011, VCU has also vastly improved its half-court defense. The Rams force an average or 16.4 turnovers per game while allowing an average of just 61.2 points.

The Rams have won their last 12 games, and Evans hopes there's more surprises to come before their season is over.

"If we do what we've been doing so far this year," he said, "we put ourselves in a great position to cut down some nets."

Some other things to watch as the tournament kicks off Wednesday:

The last time the A-10 sent just one team to the NCAA Tournament was 2005. As recently as 2014, the conference received five at-large bids.

That number dropped to three each season from 2015-17. Last year, only Davidson's surprising run to the A-10 Tournament title kept the conference from being a one-bid league. Rhode Island, which lost to Davidson in the 2018 final, ended up getting an at-large bid.

This year the A-10 might not be so lucky. VCU is in contention for an at-large bid, but that's about it. But the Rams are far from a lock and the A-10 champ could very well be the conference's only NCAA representative.

The A-10 returns to New York after a two-year hiatus. The conference tournament was played at Barclays from 2013-16, before the A-10 struck a deal with the arena and the Atlantic Coast Conference to relocate for two years and extend its contract with the arena. The Atlantic 10 held its tournament in Pittsburgh in 2017 and at Capital One Arena in the nation's capital in 2018.

Last month, the A-10 extended its agreement with Barclays Center, the home of the NBA's Brooklyn Nets, again.

Richmond, the 11th seed, faces last-place Fordham in the second game of the Wednesday's opening doubleheader.

Both coaches enter the game with uncertain futures.

Richmond's Chris Mooney has been with the Spiders for 14 seasons and has had plenty of success: Two NCAA tournament appearances, including a Sweet 16 run in 2011, two NIT quarterfinals and five 20-win seasons. He also surpassed Dick Tarrant as the career victories leader for the Spiders, but a second straight losing season and Richmond's worst in-conference record in 12 years could push to the school to consider a change. Mooney is signed through 2022, which should help his cause.

Fordham's Jeff Neubauer led the Rams to a winning season in his first year in the Bronx and the program has slid backward ever since. Fordham enters the A-10 Tournament as the 14th seed after going 3-15 in the league and 12-19 overall.