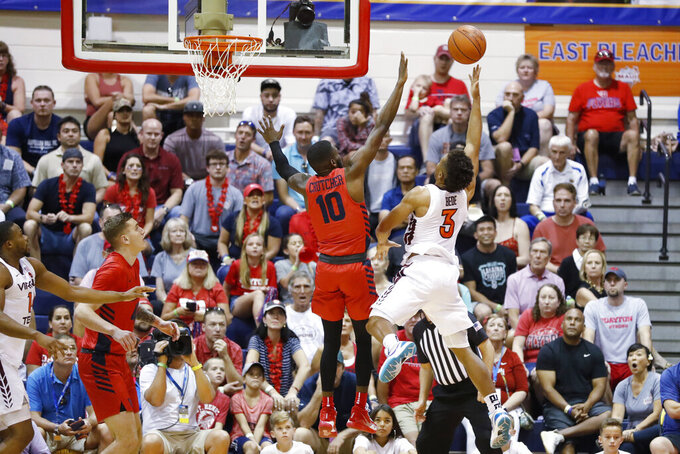 LAHAINA, Hawaii (AP) — Dayton wanted to use its size as an advantage against Virginia Tech, mainly by getting the ball in the post to Obi Toppin.

Now Obi and the Flyers are headed to the Maui Invitational title game.

Obi Toppin had 24 points and eight rebounds in another dominating Maui Invitational performance, lifting Dayton into the title game with an emphatic 89-62 victory over Virginia Tech on Tuesday.

“I think all year we have been one of the more efficient teams in the country when you look at it from an offensive standpoint,” Dayton coach Anthony Grant said. “So for us, I think it's just understanding who we are, identity-wise, and trying to stick to that identity.”

Toppin rose to the occasion on the national stage in Dayton’s Maui opener and topped himself against Virginia Tech.

The 6-foot-9 sophomore had the loud Dayton crowd roaring in the first half with a string of 3-pointers and brought them to their feet with a series of dunks in the second as the Flyers (5-0) raced past Virginia Tech (6-1).

Toppin shot 10 of 14 from the floor and led an early charge as Dayton jumped on the Hokies. The Flyers shot 64%, went 11 of 23 from the 3-point arc and have a chance to add a second Maui Invitational title — with 2003 — against No. 4 Kansas Wednesday night.

“It's a good feeling being in this position right now just because we know how hard we worked to get here,” Toppin said. “So this opportunity to play in the championship at the Maui Invitational, it's a great feeling.”

Virginia Tech was decent on offense, shooting an OK percentage, keeping the turnovers down.

The Hokies were no match for Dayton defensively, allowing the Flyers to repeatedly get inside for dunks and easy baskets.

“They took us behind the shed and whipped our hind end,” Virginia Tech coach Mike Young said.

Virginia Tech notched the first upset in Maui, making all the big plays down the stretch to knock off No. 3 Michigan State 71-66.

The Flyers opened their fourth Maui trip by knocking off Georgia 80-61 behind Toppin’s 25 points.

Toppin kept his Maui road show revved up against the Hokies, scoring inside and out. He had 14 points by halftime, hitting 5 of 9 shots.

Dayton didn’t let up in the second half and Toppin continued to have his way with the Hokies. Working primarily out of the post, he brought the loud contingent of Dayton to its feet with pair of spin moves and dunks, prompting a chant of “Obi!”

Dayton closed out the rousing victory by hitting its final 10 shots.

“We just came out with bad energy,” Dayton guard Wabissa Bede said. “I kind of felt it from like the layup line our energy was kind of low, we weren't as upbeat as yesterday.”

Dayton will be a popular mid-major pick to make a deep run in March regardless of what happens in the title game. The Flyers are that good.

Virginia Tech took down mighty Michigan State, but was no match for Toppin and the Flyers.