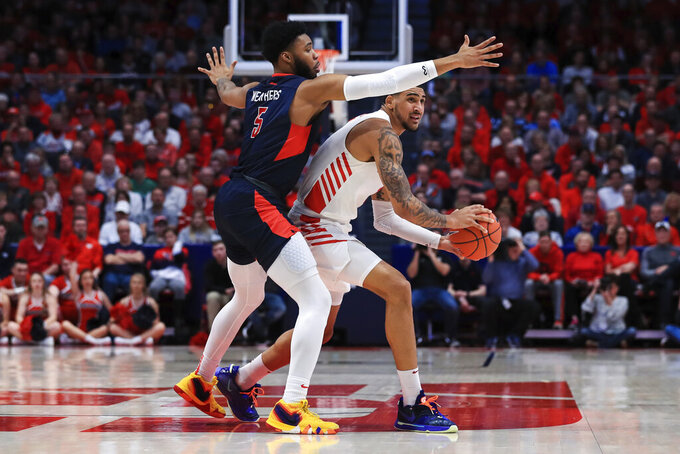 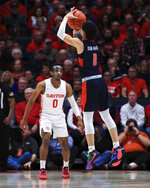 DAYTON, Ohio (AP) — Dayton coach Anthony Grant was unhappy with his team at halftime of Saturday's game against Duquesne, and he let them know it.

Duquesne held a 38-36 lead at the intermission, and Grant had to make his team understand that if No. 5 Flyers didn't pick up the energy, they stood a good chance of losing their first game since Dec. 21.

Led by their best player, Obi Toppin, and Jalen Crutcher — who scored all of his 17 points in the second half — Dayton shook off the dust and cruised to an 80-70 victory over the Dukes, the 16th win in a row for the Flyers.

“We came out pretty slow, and coach got on our you-know-whats at halftime,” said Toppin, who finished with 28 points and surpassed 1,000 for his career. "It's not often coach goes off like he did.

“(Duquesne) just came out with a lot more energy," Toppin said. "I just felt like we were a little sluggish coming out, we couldn't find our rhythm in the game. As soon as coach did what he did at halftime, we got locked in and did what we had to do to win.”

Trey Landers added 12 points and Crutcher had five assists for the Flyers (25-2, 14-0 Atlantic 10), who have yet to lose in regulation this season.

Toppin, a redshirt sophomore and potential first-round NBA draft choice, was 11 for 16 from the field, including 3 for 5 from beyond the 3-point arc. He pushed his career total over 1,000 points — accomplished in just two seasons on the court for the Flyers — with an emphatic dunk in the second half.

“He dominated the game,” Grant said.

The Flyers again grappled with a conference opponent until pulling away late. Sincere Carry had 21 points and six assists for Duquesne (18-8, 8-6).

“Defensively, we were really, really good in the second half, and I think that ignited everything,” Grant said.

The game was tied a dozen times in the first half. Toppin had 16 points in the first and narrowed Duquesne’s lead to two with a dunk at the buzzer.

Dayton pulled away in the second half, going up by 17 on a pair of foul shots from Crutcher and Trey Landers' 3-pointer. The Dukes got as close as eight late in the game before they had to start fouling.

“If you allow them to be fluid and throw the ball from side to side, you're going to get your brains beat in,” Duquesne coach Keith Dambrot said. “That's where we have to be able to do it consistently, and I think we had trouble guarding the ball in the second half. They’re one of the most fluid offensive teams in the country if you allow them to be fluid. You got to chop it up, and I thought we did a good job of that in the first half.”

Duquesne: The Dukes put up a good fight early but got buried when the Flyers started hitting critical shots.

“In order to be championship quality you got to be more consistent than that, simple as that,” Dambrot said. “We went through stretches where we couldn't score.”

Dayton: The Flyers keep soaring toward one of the best seasons in school history. Toppin is among the best players in the country. Barring a complete collapse, the Flyers should be force in the NCAA Tournament, which they haven't played in since 2017.

HOW CAN HE FORGET?

Toppin came into the game knowing he needed 21 points to reach 1,000 for his career. His mom, Roni, wouldn't let him forget. She's been keeping him up to date on his progress for weeks. As he talked to reporters after the game, his phone was still buzzing with text messages from her.

With No. 3 Kansas' win over No. 1 Baylor, there likely will be some movement at the top of the poll but it may not ripple down to Dayton.

Duquesne: At St. Bonaventure on Wednesday.

Dayton: At George Mason on Tuesday.