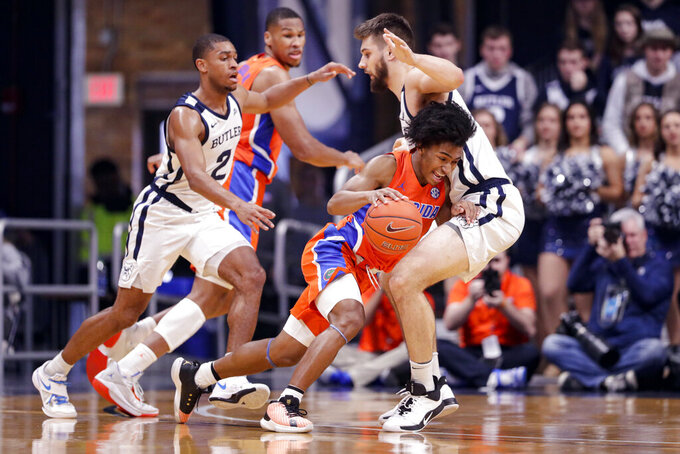 FILE - In this Dec. 7, 2019, file photo, Florida guard Ques Glover (0) drives around Butler forward Bryce Golden (33) in the first half of an NCAA college basketball game in Indianapolis. Florida ranked 326th out of 359 teams nationally in pace of play. Coach Mike White is eager for his Gators to run and press like never before. (AP Photo/Michael Conroy, File)

GAINESVILLE, Fla. (AP) — Florida coach Mike White won’t come right out and say it. He hints at it. He talks around it. He subtly divulges one of the reasons his team was among the biggest disappointments in college basketball last season.

The Gators were simply too slow. Not methodical or patient, either. Their tempo was more suited for a golf course, a bowling alley or a shuffleboard court.

Florida ranked 326th out of 359 teams nationally in pace of play. Slow-footed point guard Andrew Nembhard was the primary culprit, and big man Kerry Blackshear was even less adept at getting up and down the floor.

It was noticeable to anyone watching and frustrating for White, whose high-scoring offense was a main selling point when Florida plucked him from Louisiana Tech in 2015 to replace NBA-bound Billy Donovan.

Now, nearly six years later, White appears ready to return to his roots, eager for his Gators to run and press like never before.

Nembhard transferred to Gonzaga because “visions not aligning moving forward,” and Blackshear turned pro after spending one year in Gainesville as a graduate transfer. Their departures could be addition by subtraction for Florida, which opens the season Nov. 25 against Maine at a resort casino on tribal land in Connecticut.

“We’re quicker, we’re faster, we’re more athletic and I’m hopeful that we’re deeper,” White said. “With that level of athleticism and speed and quickness, I think there’s a chance we get better at attacking the rim, putting more pressure on the rim, drawing more fouls and being better in the open floor.

“We haven’t had many easy baskets the last two years. I think that goes hand in hand with our ability to extend our defense, to get us out in the open floor and we’ve got to convert.”

Florida has several options to replace Nembhard, all of them considerably quicker on both ends of the floor. Sophomore Tre Mann, who flashed at times as a freshman, is considered the front-runner. Fellow sophomore Ques Glover and Cleveland State transfer Tyree Appleby also are in the mix.

“I’m able to get up the floor and find teammates and just running gives us a little bit more freedom to play downhill,” Mann said. “I’m excited to see what it holds for us.”

Glover played behind Nembhard last season and had twice as many turnovers (40) as assists (19). Appleby sat out last year under NCAA transfer rules after averaging 17.2 points and 5.6 assists as a sophomore with the Vikings in 2018-19.

All three are still getting accustomed to Florida’s new practice speed.

“We’ve had more turnovers in the past five days than I think we had last season,” White said. “We go to execute some stuff a lot better and we got to clean up a lot of mistakes. If you’re going to play fast, you’ve got to slow down mentally. We’ve got to value the ball at a higher level.

“If we’re going to be a pressure team and play with a ton of energy when we get the basketball, we’ve got to calm down. We’re not in a very good place with that right now.”

The up-tempo style should benefit the rest of the roster. Versatile forward Keyontae Johnson was the team’s best player last season and returns for his junior year. Scottie Lewis and Louisiana Tech transfer Anthony Duruji could by dynamic on the break and in the open court.

“It feeds directly into who I am and my identity on the basketball court,” Duruji said. “My game is high-energy, being able to defend, causing turnovers and transition is my bread and butter — just run the lanes and get easy dunks.”

Added Johnson: “We’ve got a lot of athletes on our team for a lot of fast break points. It’s going to be a fun season.”

The Gators didn’t have much fun last year. They opened the season ranked No. 6 but lost to Florida State and UConn in the first two weeks and never seemed to reach their potential. Florida was 19-12 and the No. 5 seed in the Southeastern Conference Tournament when the season was halted because of the coronavirus pandemic.

A lack of chemistry and defensive buy-in were among the team’s issues. Pace of play was another factor, one White hopes to fix moving forward.

“I think our increase in tempo will be amongst the national leaders,” White said. “We got to put a lot of work in to be successful. But that’s our charge, that’s our desire. And that’s what I think gives this team the best chance."