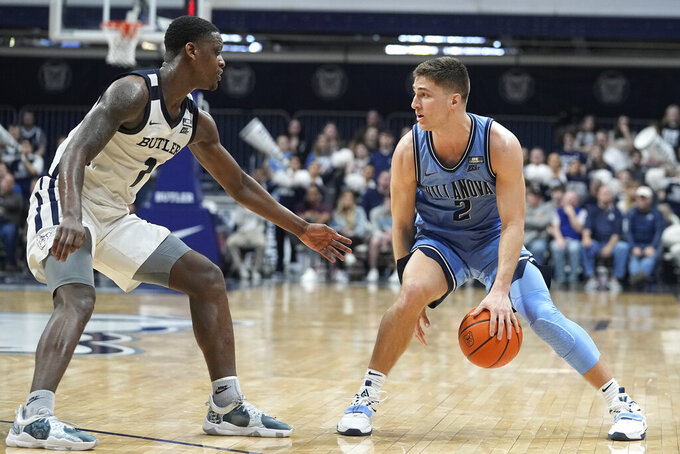 With Selection Sunday just days away, AP Top 25 teams in major conferences are down to their final days to impact their landing spots in the NCAA Tournament.

Changes could come after title runs or early exits in this week's conference tournaments. Here's a look at what's ahead:

The Atlantic Coast Conference opens its tournament Tuesday, though its two ranked teams — No. 7 Duke and No. 25 North Carolina — don't play until Thursday's quarterfinals.

The Tar Heels (23-8) re-entered Monday's poll for the first time since November and hold the No. 3 seed after beating Duke in Krzyzewski's final home game. It was a huge boost to an NCAA resume that looked shaky through February, with UNC now looking headed for a No. 9 seed as of Monday night's BracketMatrix average of 127 projected tournament fields.

This is one of two leagues that have multiple candidates for No. 1 seeds in the NCAA Tournament with No. 3 Baylor and No. 6 Kansas.

The tournament opens Wednesday in Kansas City, Missouri, with the reigning national champion Bears and Jayhawks joined by No. 14 Texas Tech and No. 22 Texas. Those teams don't play until Thursday's quarterfinals and the tournament concludes Saturday.

The Jayhawks (25-6) own the top seed and held an NCAA 1-seed in last month's preview of the selection committee's top-16 seeds. They carry 10 Quadrant 1 victories into the tournament, second only to the Bears (26-5) with 11.

Eleventh-ranked Providence won the regular-season title for the first time in program history and now headlines a field that includes No. 8 Villanova and No. 24 Connecticut in New York's Madison Square Garden.

That tournament opens Wednesday, while the Friars (24-4) hold the top seed followed by the Wildcats (23-7) and the Huskies (22-8). Providence is trying for its first tournament title since 2014 and only its third overall, with the championship game set for Saturday night.

The tournament's top seed is the conference's third team among AP Top 25 teams in No. 16 Illinois (22-8), which has a bye into Friday's quarterfinals in Indianapolis.

The championship game is the last game to tip off Sunday afternoon, making it one of five leagues — the American Athletic, Atlantic 10, Ivy League and SEC are the others — running all the way to Selection Sunday.

Second-ranked Arizona looks set to earn a No. 1 seed in the NCAA Tournament as it enters Las Vegas. The Wildcats (28-3) have dominated the Pac-12 in their first season under Tommy Lloyd with only two of their 18 league wins coming by single-digit margins.

The field includes No. 13 UCLA, which had a memorable Final Four run last year, and No. 21 Southern California. All three of the league's ranked teams open play in Thursday's quarterfinals, with the championship set for Saturday.

This is the other league with a pair of teams in contention for No. 1 seeds in the NCAAs with No. 4 Auburn and No. 5 Kentucky.

Auburn held a No. 1 NCAA seed on BracketMatrix's projection Monday night, while Kentucky was a 2-seed and the Volunteers were a 3. All three of those teams have eight Quadrant 1 victories.