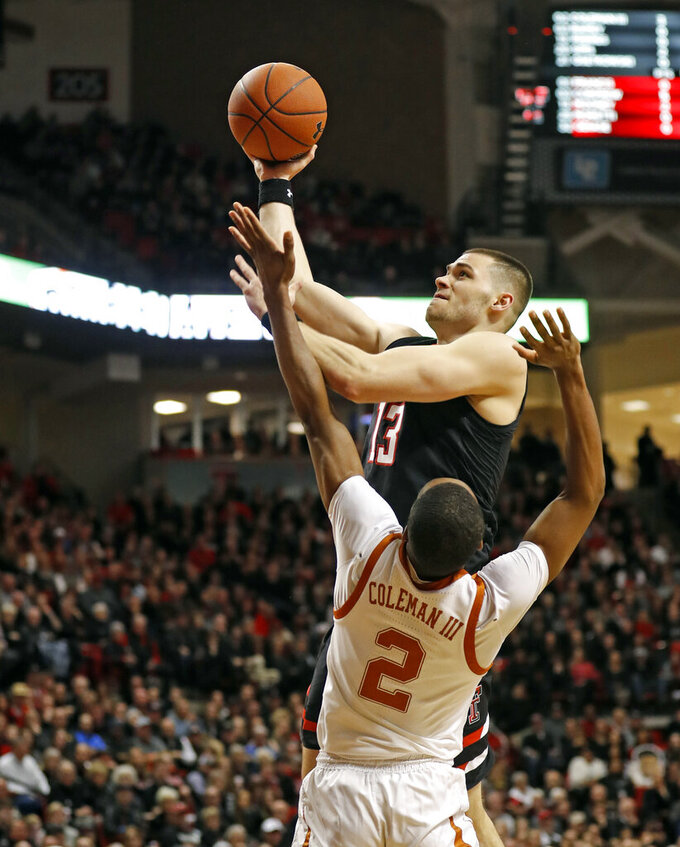 Chris Beard liked the returning players Texas Tech had and the experience they gained after the Red Raiders went to the NCAA Elite Eight for the first time last season.

Still, hometown standout Jarrett Culver, sharp-shooting Italian guard Davide Moretti and the rising senior duo of Norense Odiase and Brandone Francis were going to need some help after the departure of All-Big 12 guard Keenan Evans with four other seniors and high-soaring freshman Zhaire Smith's early exit to the NBA.

"The pivotal time for us is when we signed the two grad transfers," said Beard, 70-29 in three seasons as Tech's coach. "When we got Matt (Mooney) and Tariq (Owens), we knew that we're going to stay older, which I always like to do."

Mooney, the guard who started all 68 games the past two seasons at South Dakota, and 6-foot-10 post Owens from St. John's have fit right in as full-time starters for the eighth-ranked Red Raiders (25-5, 13-4 Big 12).

Picked to finish seventh in the preseason vote by league coaches, Texas Tech is guaranteed at least a share of its first Big 12 title with a win in the regular-season finale Saturday at Iowa State.

"They got the guys that everybody in the country was trying to recruit," TCU coach Jamie Dixon said. "Everybody knew they were probably the best graduate transfers outs there, and they got them, and they fit in really well into their system."

The Red Raiders have an eight-game winning streak, have already won a school-record 13 Big 12 games and are only two wins shy of last year's overall total even before playing a postseason game. They split their two regular-season games with both league co-leader No. 18 Kansas State, which is home Saturday against Oklahoma, and dethroned 14-time champ No. 13 Kansas.

"Our plan has always been, as we build the program, to try to stay older," Beard said. "So I think just with the returners, the recruiting and then, you know, we have a lot of confidence in our culture, in our process. We don't ever think that we're going to go into a season trying to finish ninth or 10th. Our goal is always to be a part of the fight."

Since losing three games in a row in mid-January, including Iowa State becoming the only opponent to win in Lubbock this season, Texas Tech has won 10 of its last 11. The only loss in that stretch was at Kansas, which later in Lubbock had a 29-point loss that was its most lopsided in Big 12 play since 2000.

"To us, it was never a moment of panic," Beard said. "It really wasn't like a losing streak to us. It was just three close games. We stayed the course, we dug ourselves back out by winning a couple of close games."

Culver, the sophomore from Lubbock who could be headed to the NBA after this season, is the leading scorer (17.9 points per game) and rebounder (6.3). He was the only of the top five scorers back after Tech won 27 games, was the Big 12 runner-up and finished in the Elite Eight last season with a loss to eventual national champion Villanova.

Moretti is a 51 percent shooter with 11.3 points a game, more than triple his scoring average last year as a freshman role player who became a key contributor in March. He now leads the Big 12 making 47 percent of his 3-pointers, and is second at 93 percent of his free throws.

Mooney has started all 30 games and is averaging 10.8 points with 3.2 assists. Owens, who played as a freshman at Tennessee before going to St. John's, is the Big 12 leader with 2.4 blocks per game while making 29 starts.