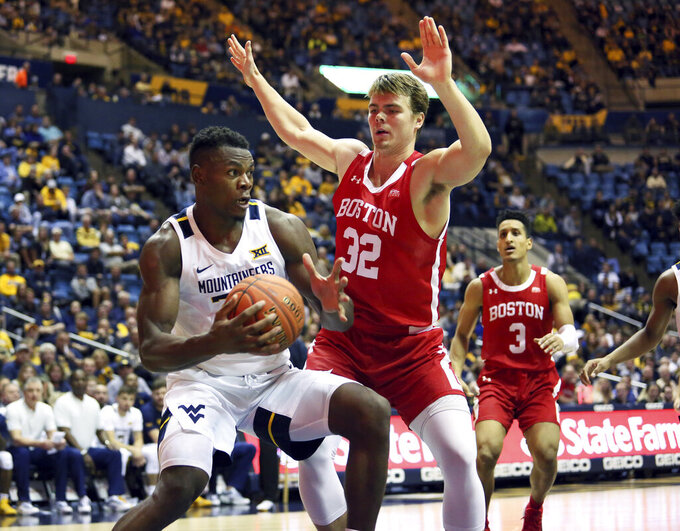 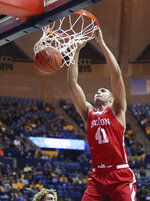 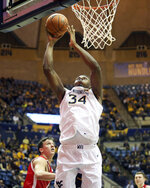 MORGANTOWN, W.Va. (AP) — West Virginia hasn’t had much success on defense since Jevon Carter left for the NBA after the end of the 2017-18 season. The Mountaineers showed some inside dominance against Boston University on Friday night.

Led by big men Oscar Tshiebwe and Derek Culver, West Virginia caused plenty of problems for Boston University in the paint and beat the Terriers 69-44.

"They were so much more physically stronger than us," Terriers coach Joe Jones said. "It was just really hard for us to do anything that we like to do."

The Mountaineers scored 48 points in the paint and outrebounded the Terriers 37-32.

"We've been waiting to win a game big like that," West Virginia guard Jermaine Haley said. "I think we did a really good job defensively today."

West Virginia made 13 steals and scored 25 points off of turnovers.

"I feel like as a whole, as a team, we are making very, very big strides," said West Virginia forward Derek Culver.

Tshiebwe, a freshman, scored 21 points and grabbed 10 rebounds for his second double-double of the season.

"He's a great kid. He wants to learn." Huggins said. "I think sometimes he almost wants to do the right thing too much."

Huggins still has issues with playing the 6-9 Tshiebwe and the 6-10 Culver together on the offensive end.

“They’re still getting in each other’s way,” Huggins said. “We need to make sure we can get each of them a chance to get isolated. If they’re both isolated, they’re going to score.”

The Mountaineers scored the first 11 points of the game and led by as many as 18 midway through the first half. They extended a 36-23 halftime lead to as many as 28 in the second half.

"We're getting better," Huggins said. "We're trying to be consistent with it."

Walter Whyte scored 13 points and Jonas Harper had 10 for the Terriers (3-3).

Boston University committed 22 turnovers and was limited to 33% shooting (17 of 52).

"Honestly, I didn't feel like I prepared them well enough for this game." Jones said.

Boston University: The Terriers had their two-game winning streak snapped. They were coming off an emotional 78-70 win at South Carolina on Tuesday.

West Virginia: The Mountaineers are off to a 4-0 start for the first time in three years. They beat a team from the Patriot League for the fourth straight season.

Forward Gabe Osabuohien saw his first action for West Virginia, three months after his transfer from Arkansas. The NCAA approved the junior’s waiver request for immediate eligibility this week. Osabuohien had two rebounds, two fouls and a turnover in 14 minutes.

West Virginia made just 2 of 18 3-point attempts. The Mountaineers are shooting 30% from beyond the arc for the season.

“I think some of it is mechanics. Some of it is balance,” Huggins said. “I’m a big believer in stepping into your shot. I think when you step into your shot you get your legs in it, and I get tired of watching guys banging the ball off the front of the rim constantly.”

Boston University: Travels to Cancun, Mexico, to take on Northern Colorado next Tuesday.