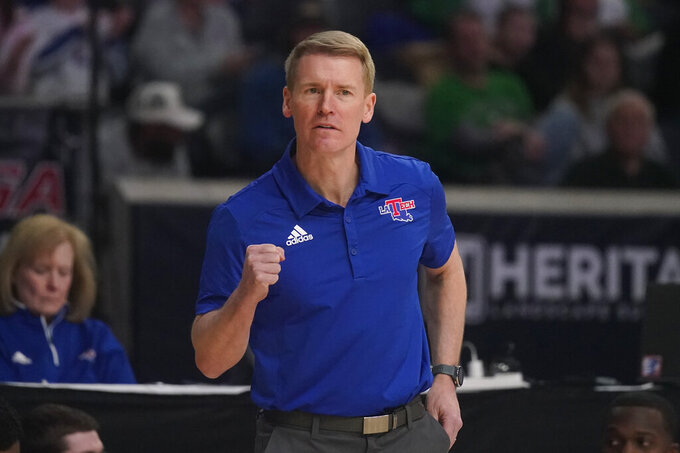 Louisiana Tech head coach Eric Konkol watches from the sidelines during the first half of an NCAA college basketball game against North Texas in the semifinal round of the Conference USA tournament in Frisco, Texas, Friday, March 11, 2022. (AP Photo/LM Otero)

Konkol compiled a 153-75 record in seven seasons at Louisiana Tech. He had six seasons with at least 20 wins and finished in the top three in the Conference USA standings five times.

Konkol was a student assistant coach for Tulsa’s 2001 NIT championship team under coach Buzz Peterson. Konkol was on the staffs at Tennessee, George Mason and Miami (Fla.) before taking over at Louisiana Tech in 2015.

This season, Louisiana Tech finished with a 24-10 record and a 12-6 league mark. Last season, Konkol was Conference USA Coach of the Year and led the team to a third-place finish in the NIT.

Konkol replaces Frank Haith, who resigned after eight seasons leading the Golden Hurricane. Haith was 139-108 at Tulsa, but his squad finished this season with an 11-20 record.