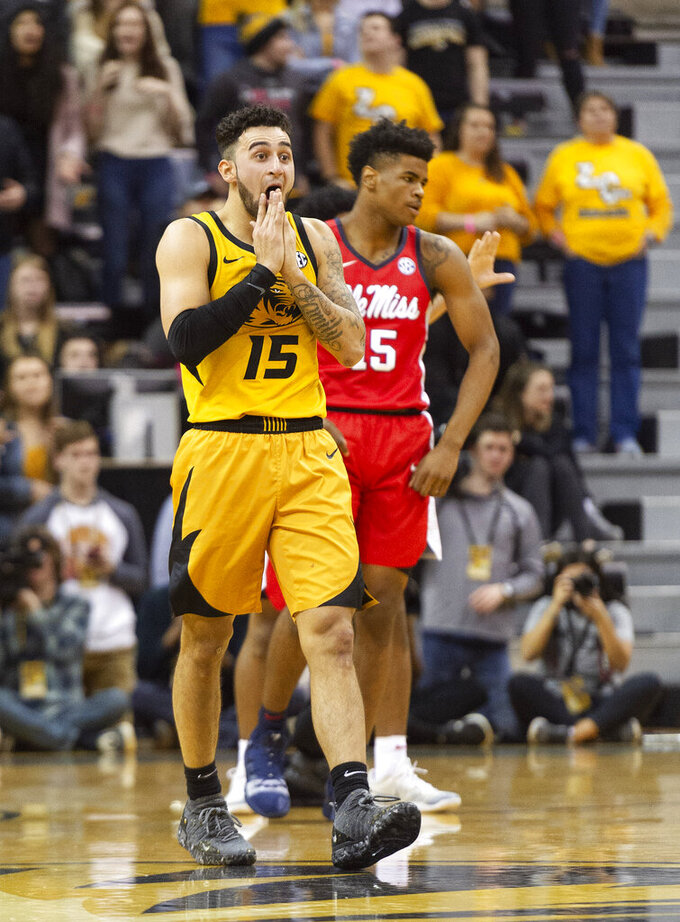 Missouri's Jordan Geist, left, reacts after getting a foul called on him in front of Mississippi's Luis Rodriguez, right, during the first half of an NCAA college basketball game Saturday, March 9, 2019, in Columbia, Mo. (AP Photo/L.G. Patterson) 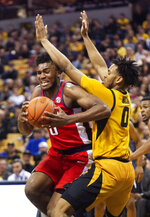 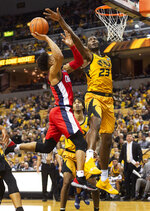 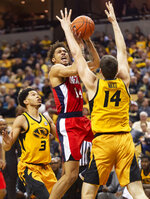 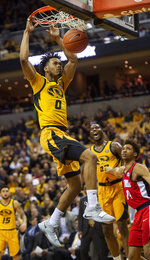 COLUMBIA, Mo. (AP) — Ole Miss had been in the midst of a three-game losing skid and a loss to Missouri would have likely placed the Rebels on the NCAA Tournament bubble. Down double-digits in the second half, Ole Miss had to buckle down in front of Missouri's crowd.

Missouri (14-16, 5-13) had a shot to tie the game with fewer than 20 seconds left, but Rebels' forward Bruce Stevens stuffed Jordan Geist's layup attempt and senior guard Terence Davis knocked down a pair of free throws to secure an Ole Miss victory.

Mississippi trailed 34-26 at halftime but Tyree's 3-pointer tied it at 46 with 12:20 remaining and another Tyree 3-pointer gave Ole Miss the lead, 60-59 with 5:03 to go. Later, it was sophomore guard Shuler who put the Rebels up two points with a fastbreak layup with 1:28 remaining. He knocked down a fadeaway jumper on Ole Miss' next possession to extend the team's lead to four with 52 seconds left.

"I think Devontae Shuler was really the spark of the game," Tyree said. "He came in, lip busted, playing the hardest that he could. I was trying to play off of his energy."

"Shuler just got going," Missouri coach Cuonzo Martin said. "They have two guys that can score the ball, so he's the third option offensively. He made plays, he made shots."

In scraping by, Ole Miss picked up a road win that was crucial in locking down an NCAA Tournament bid.

Missouri was looking to win its third straight game and move to .500. Freshman Xavier Pinson scored a career-high 20 points and his rookie counterpart Torrence Watson added 14.

Ole Miss: The Rebels appeared safely headed to the NCAA Tournament for much of February, but their recent three-game losing streak started to move them closer to the bubble. Breaking that skid likely secured their tournament bid.

Missouri: The Tigers failed to reach .500 and couldn't win on senior day, but their two leading scorers were freshmen. The future has looked bright for Missouri in its last couple of games.

After being selected to finish last in the conference's preseason media poll, the Rebels have now totaled 20 wins and have probably clinched a ticket to the NCAA Tournament. Coach Davis said the team was not afraid to address the media's low expectations.

"The very first day, I said '(Terence Davis), it's not going to be fair to you if we talk about a rebuilding year,'" he said. "We think we're talented enough in the room. Give these guys a lot of credit."

With his 14-point outing, Watson has averaged 15.7 points in his last four games. The freshman played second fiddle to Pinson on Saturday, who added six assists to his 20 points.

"We've really just been waiting on something like that," Watson said. "I think everyone on the team knows what he can do. We've all seen he can do the drive to the basket like that. His handles are crazy."

Ole Miss will play Thursday in the SEC Tournament. The Rebels tied Mississippi State for sixth place and will be the No. 7 seed in the conference tournament.

Missouri will play Wednesday in the tournament as a 12 seed against Georgia.