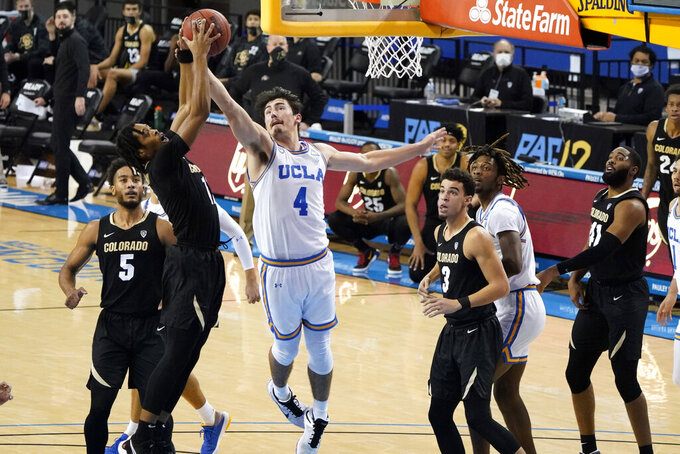 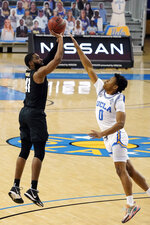 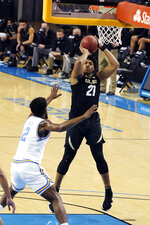 LOS ANGELES (AP) — UCLA took a huge loss before its game against Colorado began. The Bruins found out second-leading scorer and rebounder Chris Smith has a torn ACL and his career in Westwood is likely over.

Still, they came together and rallied for a 65-62 victory over the Buffaloes on Saturday night, extending their home winning streak to 13 games.

“We were all heartbroken,” said Jaime Jaquez Jr., who scored a game-high 14 points. “It's his senior year and we're expecting great things. We're going to try to play this season for him.”

Smith fed his teammates passes during pre-game warmups and was on his feet cheering from the bench during the physical and closely fought game.

“I’m probably more upset about it than him,” Bruins coach Mick Cronin said. “He had to put his arm around me. It’s tough for me to coach today.”

The Bruins never led by more than seven in the second half. McKinley Wright IV's 3-point play tied the game for the last time at 54-all.

“We knew it was going to be a physical game down low and it came down to who could play the toughest,” Cody Riley said.

Riley muscled inside for consecutive baskets, got fouled on the second one and made the free throw, putting UCLA back in front 58-54. All of the Bruins' crucial baskets over the final 10 minutes were scored in the paint, where they owned a 38-28 edge.

“We would not have won if Cody and Jalen (Hill) hadn’t gotten some tough physical points around the basket for us,” Cronin said.

Tyger Campbell scored inside and Riley got fouled, making both shots, for a 62-55 lead. Hill had eight points and six rebounds.

Wright and Maddox Daniels scored 12 points each, and Jeriah Horne and Eli Parquet added 10 points each for the Buffaloes (7-3, 1-2).

"It was a hell of a basketball game, high level on the defensive end," Buffs coach Tad Boyle said. "I just felt like every basket we had to manufacture and they’re so quick in their rotations that you have a split second to make a play or make the shot and then that ball has got to move. There were times we did a good job of that and there were times we didn’t.”

Wright's jumper pulled the Buffs within three points with a minute remaining. Wright blocked Campbell's jumper and the Buffs called timeout. Daniels then missed two 3-pointers that potentially would have tied the game.

“He got two really good looks and he's our best 3-point shooter, and we're going to live with him taking those shots,” Wright said. “I wouldn't trade those last two shots for any other ones.”

UCLA got the ball back and the Buffs were forced to foul with five seconds remaining. Johnny Juzang made both.

Daniels hit a 3-pointer to pull the Buffs within two, but he got called for a foul as the final buzzer sounded. The referees put four-tenths of a second back on the clock and Bernard made one of two free throws for the Bruins. The Buffs inbounded from the opposite baseline, but couldn't get a decent shot off in time.

Colorado: The Buffs gained a split during their weekend in Los Angeles, having beaten USC by 10 points on Friday for their first Pac-12 victory. They've won five of seven.

UCLA: The Bruins will need to step up to replace Smith, who averaged 12.6 points and 6.4 rebounds. Smith got hurt in the first half against Utah on Friday, when he scored a team-leading 16 points. “There's no cartilage damage,” Cronin said. “It's just going to be a matter of time and he’ll be fine. He’s probably played his last game as a Bruin.”

“It was a battle extraordinaire in that paint. There's going to be some bruises tomorrow on both sides.” — Boyle.

Colorado: Hosts No. 21 Oregon on Thursday in the first of four straight home games.

UCLA: Visits Arizona State on Thursday. The Sun Devils are currently dealing with COVID-19 issues and have had to postpone their last two games.