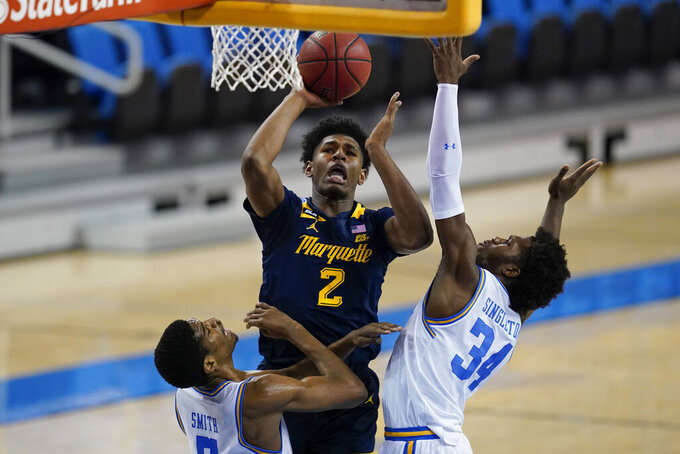 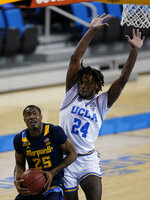 LOS ANGELES (AP) — Maintaining their poise in crunch time, getting a couple of big blocks, and hitting 10 of 13 free throws in the second half. This is what progress looks like for the UCLA Bruins.

Jaime Jaquez Jr. tied his career high with 18 points despite four fouls and UCLA closed with a 13-4 run to hold off Marquette 69-60 on Friday night for its fifth straight win.

Jules Bernard, who started the first five games, added 15 points on seven shots and had no turnovers off the bench for the Bruins (5-1).

UCLA persevered despite the offensive struggles of lone senior Chris Smith and Johnny Juzang, the Kentucky transfer who started in his second game. They combined to shoot 3 of 20, with Smith missing all eight of his field-goal attempts.

“We’re trying to show resilience and show poise, and that we’re a great team when we want to be,” Bernard said. “We knew we had a tough test.”

It was the teams’ first meeting since 1964, when Gail Goodrich scored 21 points in UCLA's nine-point victory, and Marquette's first visit to a fan-less Pauley Pavilion.

D.J. Carton scored 18 points and Dawson Garcia added 12 for the Golden Eagles (4-2). Five Marquette players had three or more fouls, with Koby McEwen fouling out in the closing seconds.

“The foul trouble was very difficult for us to manage and keep a rhythm and flow to the game,” Marquette coach Steve Wojciechowski said.

Garcia made a pair of free throws to tie the game for the last time at 56-all.

From there, the Bruins ran off seven points in a row, making 5 of 6 free throws, to take a 63-56 lead. It was part of their game-ending run.

Neither team ever led by double digits. The second half was a back-and-forth affair, with UCLA outscoring the Eagles 33-26.

UCLA's defense forced Marquette into 18 turnovers in the game and pressured the Eagles' shooters. Jamal Cain tossed up an airball as the shot clock expired on one possession.

“You can’t spot a really good team on the road 12 points based on kind of careless turnovers,” Wojciechowski said. “We’re having way too many (mistakes) and it puts an incredible amount of pressure on our defense.”

UCLA's Chris Smith and Jalen Hill came up with big blocks in the final two minutes with the Bruins clinging to a small lead.

“We played a lot smarter the last eight minutes defensively,” Cronin said. “We got to the foul line and got a few key offensive rebounds.”

Marquette had won four of five coming in, including an upset of then-No. 4 Wisconsin. But the Eagles were held to just two field goals over the final seven minutes of their first road game of the season.

McEwen clanked a 3-point shot off the rim and Garcia's 3-point attempt rimmed out in the closing seconds.

The Eagles opened the game with an 18-11 run, including seven by Carton, during which they built their largest lead of eight points.

The Bruins answered with seven straight points that launched a 25-16 spurt and put them ahead 36-34 at the break. During UCLA's scoring run, Theo John and Justin Lewis each picked up their third fouls for Marquette.

Marquette: After playing their first five games at home, the Eagles are getting a taste of the road. Besides the usual rigors, they're facing extra precautions while trying to stay safe from COVID-19.

UCLA: Playing their second quality nonconference game, the Bruins gave themselves a big confidence boost with the victory. “If we just keep going on that steady course, we’re going to be a really good team toward the end of the season,” Jaquez said. A loss to San Diego State in their season opener helped knock them Bruins out of the Top 25, but they've been winning ever since.

Guard Symir Torrence hurt his toe in practice on Thursday and couldn't play. There's no timetable for his return. Forward Theo John, who had three fouls in the first half, hasn't been able to practice because of a nagging knee injury that has limited his mobility over the last week.

Marquette: The Eagles head directly to Omaha for their Big East opener at Creighton on Monday.

UCLA: Hosts Long Beach State on Tuesday in a game that had been postponed last month.