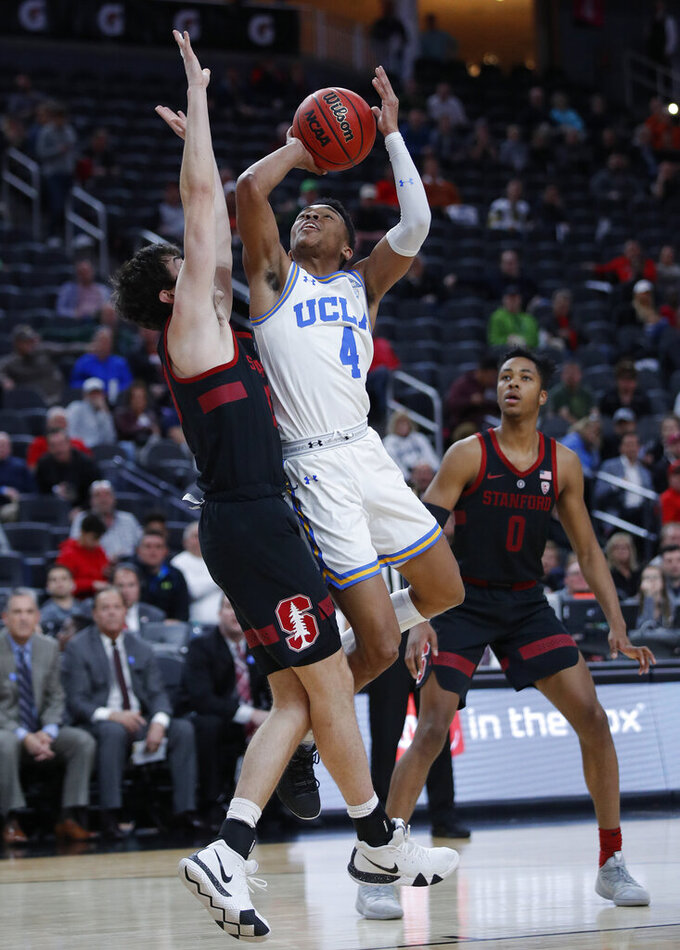 UCLA's Jaylen Hands shoots over Stanford's Cormac Ryan during the first half of an NCAA college basketball game in the first round of the Pac-12 men's tournament, Wednesday, March 13, 2019, in Las Vegas. (AP Photo/John Locher) 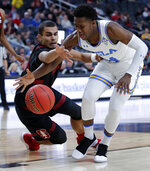 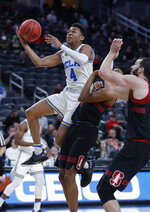 LAS VEGAS (AP) — UCLA shut Stanford down well into the second half, appearing as if it would cruise into the next round of the Pac-12 tournament.

The Cardinal made it a much more difficult trip by hitting shots they were missing earlier.

Jaylen Hands had 22 points and 11 rebounds, helping UCLA hold off Stanford 79-72 in the opening round of the conference tournament on Wednesday night.

"Well, I'm glad that one is over," UCLA interim coach Murry Bartow said. "But I thought it was a great win for our guys. I thought our guys competed hard, fought hard."

The seventh-seeded Bruins (17-15) built a 26-point lead before Stanford started hitting shots in the closing minutes to pull within 69-62.

UCLA hit 10 of 12 free throws in the final 1:05 to earn a spot in Thursday's quarterfinals against No. 2 seed Arizona State.

Jalen Hill had 12 points and 10 rebounds, and Chris Smith added 14 points for the Bruins. UCLA will have to play without freshman point guard David Singleton, who broke his foot in the closing minutes of Wednesday's game.

"It's the Pac-12 tournament, so no one is going to come in here and lay down for 40 minutes," Hands said. "We expected them to come back, and we came out and we won."

The 10th-seeded Cardinal (15-16) struggled against UCLA's defensive pressure early, finishing at 35 percent from the floor and 7 of 25 from the 3-point arc.

"Offensively, we just were really, really struggling putting the ball in the basket," Cardinal coach Jerod Haase said. "Once we did get a couple of looks and the guys, I thought, played a little bit more energy, got a couple of things going and continued to fight to the end, which I'm certainly proud of."

UCLA's regular season included some ugly early losses, the firing of coach Steve Alford and ended with losses to Colorado and Utah.

Stanford stumbled to the finish, losing four of its final seven games, including rival Cal in the finale.

The Bruins and Cardinal split the season series, each winning at home.

Neither team could get shots to fall early in the rematch, opening a combined 4 for 24. The Bruins started to find the range and hit eight of nine shots to build a 31-18 lead.

Stanford had a scoreless drought of more than four minutes, shot 8 of 35 and went 1 for 11 from the 3-point line in the first half.

The trend continued early in the second half and UCLA went on a 12-2 run to build its lead to 57-31 midway through.

Stanford finally started hitting shots midway through the second half, but ran out of time.

Stanford was unable to find the range until late, digging a big hole it couldn't shoot out of to get knocked out of the Pac-12 tournament by UCLA for the second straight season.

The Bruins were superb defensively until the midpoint of the second half, then had a hard time stopping the Cardinal. They'll need to finish better to have a chance at beating Arizona State.

Stanford awaits word if it gets an invite to a postseason tournament.