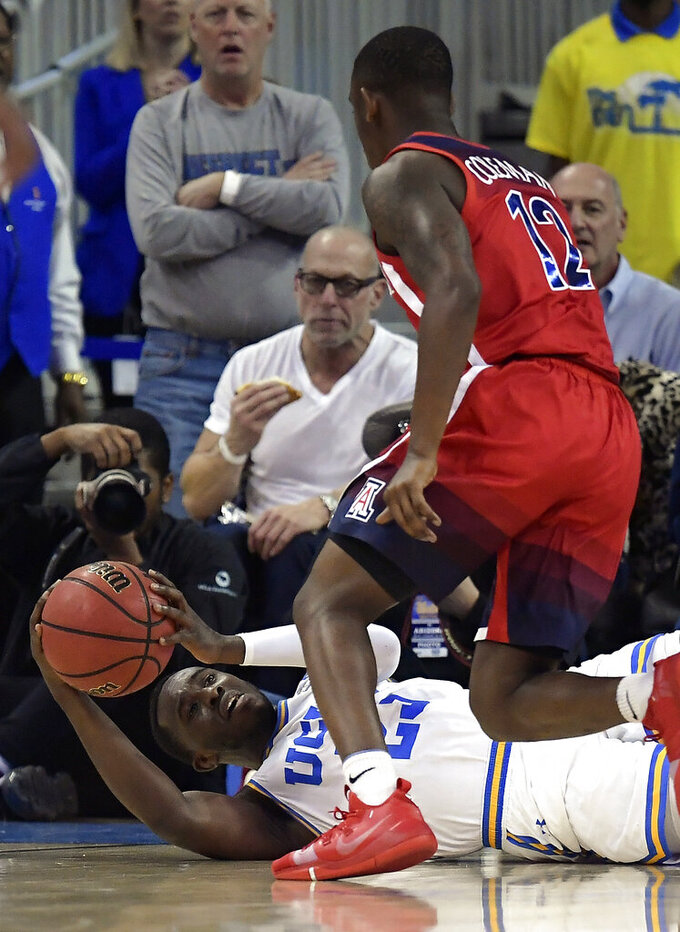 UCLA guard Prince Ali tries to pass the ball after falling while under pressure from Arizona guard Justin Coleman during the first half of an NCAA college basketball game Saturday, Jan. 26, 2019, in Los Angeles. (AP Photo/Mark J. Terrill) 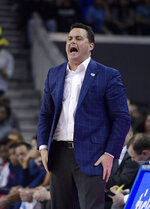 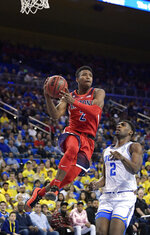 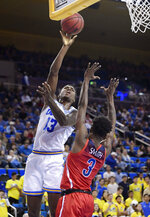 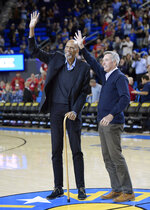 LOS ANGELES (AP) — For the first time in a long time, UCLA played 40 minutes together. The Bruins shared the ball, defended and didn't let up.

Kris Wilkes led the way with a career-high 34 points, Moses Brown had 11 points and 15 rebounds, and the Bruins routed Arizona 90-69 on Saturday night to snap a three-game skid.

"We shared the ball and knocked down shots," Wilkes said. "I calmed down a lot more and wasn't trying to force a lot of shots like I previously did in the past game."

The Bruins (11-9, 4-3 Pac-12) opened a 20-point lead early in the second half when Wilkes scored their first six points and Jalen Hill completed a 3-point play.

Wilkes tied his career high with five 3-pointers in the second half when UCLA shot 67 percent from the floor and never allowed Arizona to make a run. He also hit all five of his free throw attempts.

"You could see the look in his eye, you see he was confident," Bruins interim coach Murry Bartow said. "I like that he wasn't giddy about it. He was very professional and didn't change his expression much."

Jaylen Hands added 12 points and 11 assists for the Bruins.

The Wildcats (14-7, 5-3) went nearly five minutes without a field goal until Brandon Williams hit a 3-pointer that left them trailing 62-41.

"We can't make a shot," Arizona coach Sean Miller said. "At the end of the day, someone really has to throw that ball in."

Brown's presence helped the Bruins own a scoring 42-26 edge in the paint.

"It's really big that he plays 30-plus minutes because he really anchors our 2-zone," Bartow said. "We're much better when he's in the middle of it."

Williams led Arizona with 19 points in the Wildcats' first visit to Pauley Pavilion in two years. They won that game 96-85 in January 2017 when both teams were ranked in the top 10.

"We're getting shots that we're capable of making. We're just not making them," Williams said.

The Pac-12's longtime powers have fallen from that lofty perch with both schools struggling during a season in which no league school currently resides in the Top 25.

Arizona: The Wildcats stumbled through two blowout losses in LA, the other one by 23 points at USC. They've dropped three of four but in a weakened Pac-12 they're still in the upper tier of the standings.

UCLA: The Bruins bounced back in nearly all categories from their nine-point loss to Arizona State. They made free throws, controlled the boards and played well with the lead. They face first-place Washington on the road next weekend.

The Wildcats played both games in LA without center Chase Jeter, who has been bothered by a sore back for the last week. Without their 6-10 center the Wildcats were outrebounded 98-69 in both losses. Jeter is their leading rebounder at 7.2 and top scorer off the bench with 12.6 points.

Kareem Abdul-Jabbar and several of his teammates from UCLA's 1969 national championship squad were honored at halftime. Abdul-Jabbar leaned on a long cane during the introductions.

THE PAST AND THE PRESENT

Abdul-Jabbar and the 7-foot-1 Brown met for the first time. Brown, the Bruins' tallest player since 1992-93, had his seventh double-double of the season. The freshman attended Archbishop Malloy High in New York, and Abdul-Jabbar starred at Power Memorial Academy in the city.

"I always wanted to meet him," Brown said. "We had a lot of things in common. He told me to keep up the good work."

"He talks to me all the time before games trying to get my head right and tells me to work hard and work smart," Brown said.

Arizona: At Arizona State on Friday in the first of two rivalry meetings.