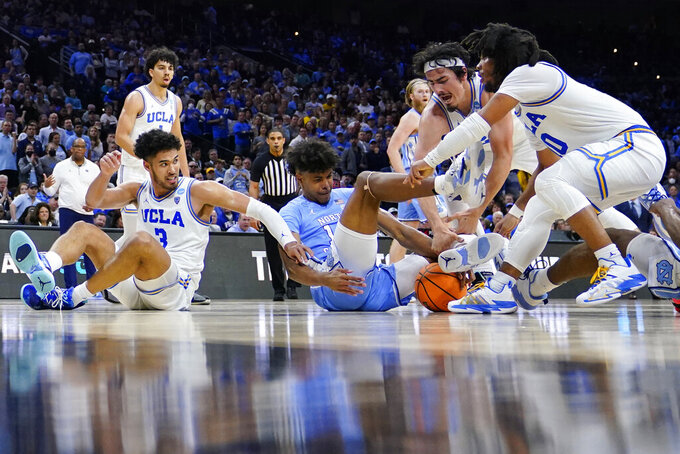 North Carolina's Puff Johnson, center, battles for a loose ball against UCLA's Johnny Juzang, from left, Jaime Jaquez Jr. and Tyger Campbell during the second half of a college basketball game in the Sweet 16 round of the NCAA tournament, Friday, March 25, 2022, in Philadelphia. (AP Photo/Matt Rourke)

LOS ANGELES (AP) — Jaime Jaquez Jr. said Monday he will return to UCLA for his senior season, keeping him in Westwood for the debut of his sister Gabriela with the women’s basketball team.

A slickly produced video posted to his social media accounts concluded with Jaquez slipping on his team jersey and saying, “I'm coming back.”

The video featured highlights of his first three seasons and images of John Wooden, who guided the Bruins to 10 of their record 11 NCAA titles.

“I want to hang banner No. 12 at Pauley Pavilion,” Jaquez said.

The guard-forward from nearby Camarillo earned first-team All-Pac-12 honors last season. Jaquez has averaged 11.8 points, 5.5 rebounds and 1.8 assists in 97 games over three seasons.

"Jaime has a chance to go down with so many other great Bruins in UCLA history who have played four seasons in front of the Pauley Pavilion faithful,” coach Mick Cronin said in a statement.

Jaquez's sister is a 6-foot forward who averaged 34.2 points as a senior and led Camarillo High to a 30-3 record. She scored 52 points in a playoff game, second most in Ventura County history.