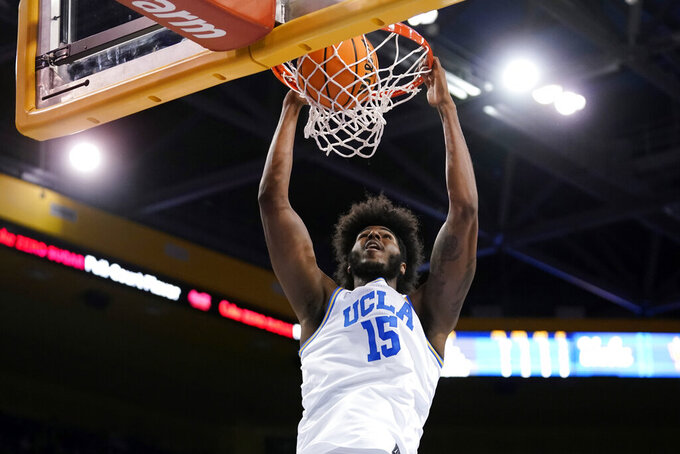 FILE - UCLA center Myles Johnson (15) dunks during the first half of an NCAA college basketball game against Arizona State, Monday, Feb. 21, 2022, in Los Angeles. UCLA guard David Singleton is returning for a fifth year with the Bruins, while center Myles Johnson is leaving the team to finish his graduate degree in electrical engineering. Both players announced their plans on social media Thursday, April 28, 2022. (AP Photo/Marcio Jose Sanchez, File)

LOS ANGELES (AP) — UCLA guard David Singleton is returning for a fifth year with the Bruins, while center Myles Johnson is leaving the team to finish his graduate degree in electrical engineering.

Both players announced their plans on social media Thursday.

Singleton is taking advantage of an extra year of eligibility, which the NCAA granted to athletes because of the COVID-19 pandemic.

“The opportunity to have one more chance to play for this great institution, to represent the four letters, to go down in history, it's an opportunity I just can't pass up,” he wrote. “It's one more chance at the Big Dance. See you back in Pauley, next season.”

Singleton averaged 4.8 points and 1.5 rebounds while playing in 33 games. He led the Bruins in 3-point shooting at 45% and frequently provided an emotional spark off the bench.

"David has been a big shot maker through the past four seasons and his return is a major boost for us,” coach Mick Cronin said.

Johnson decided not to use a fifth season of eligibility and instead will focus on completing the second year of his master's program. He averaged 3.6 points, 5.4 rebounds and 1.3 blocks playing in all 35 games, including 15 starts, as a redshirt senior last season.

He transferred to UCLA last year after earning an undergraduate degree at Rutgers.

“Since the pathways of my other passions in engineering and philanthropy have moved to the forefront, I have decided to pursue those endeavors,” Johnson wrote. “They are just as meaningful in my life.”

Guard Jaime Jaquez Jr. already said he will return next season, and guard Tyger Campbell is expected back, too.

Guards Johnny Juzang and Peyton Watson declared for the NBA draft and hired agents. Guard Jules Bernard also declared for the draft, but didn't hire an agent, leaving open the possibility of returning to Westwood. Guard Jake Kyman is transferring.

UCLA doesn't expect to have center Cody Riley back for a sixth season. The redshirt senior from Kansas City, Kansas, averaged 7.3 points and 3.9 rebounds while starting 20 of the 26 games he appeared in last season.

Riley was suspended his freshman season after being arrested for shoplifting during a team trip to China, along with LiAngelo Ball and Jalen Hill. Riley had his best season as a junior, when he averaged 10 points and started all 31 games in the Bruins' run to the Final Four.