UConn beats UCF to guarantee no losing record this season 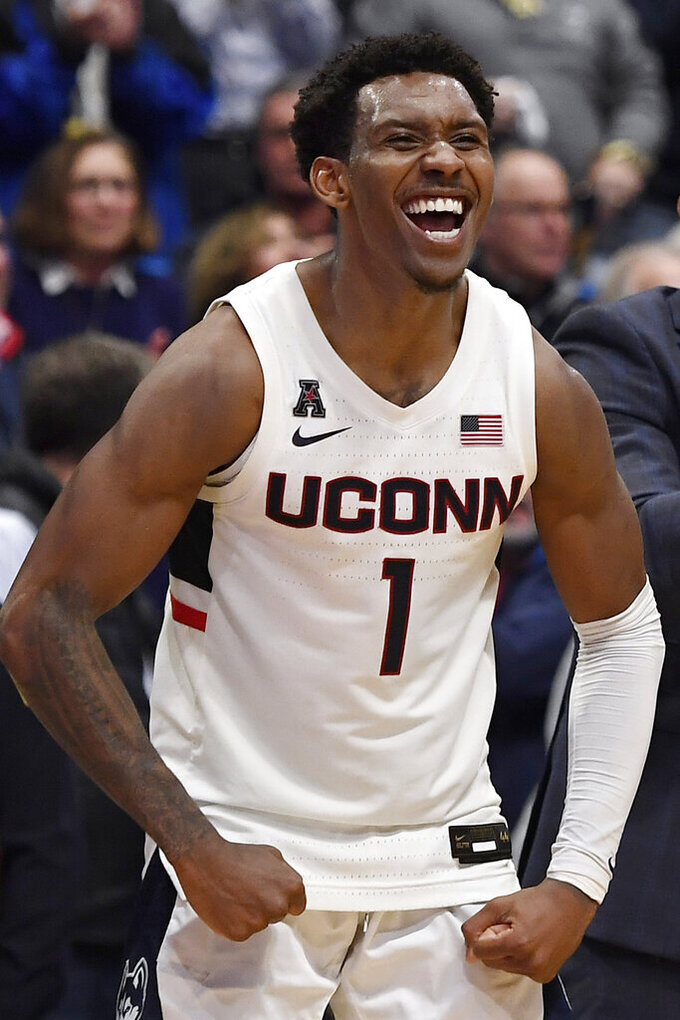 HARTFORD, Conn. (AP) — UConn could drop the rest of its games this season and still avoid a losing record for the first time in four years.

Isaiah Whaley tied a career-high with 18 points and pulled down 11 rebounds to help Connecticut to an 81-65 win over UCF Wednesday in the American Athletic Conference.

Christian Vital also had 18 points and James Bouknight finished with 16 for the Huskies (16-12, 7-8 American Athletic Conference), who have three games left in the regular season and at least one in the conference tournament.

UConn led by just four points at halftime, but broke the game open with a 12-2 run early in the second half.

A Vital drive gave UConn its first double-digit lead at 53-42 and a second-chance dunk by Whaley put the Huskies up 60-43 lead midway through the second half.

Whaley, who came in averaging 4.7 points, hit seven of his nine shots from the floor and made all four of his foul shots.

“He was relentless on the boards, creating second and third opportunities for them,” UCF coach Johnny Dawkins said.

A 3-pointer by UCF's Darin Green Jr. capped a 7-0 run that cut the deficit to 10 points before the Huskies stretched it out again.

Collin Smith had 17 points to lead UCF (14-13, 5-10), which had won three of its previous four games, including victories over AAC leaders Cincinnati and Tulsa. Ceasar DeJesus added 14 points for the Knights.

UConn opened strong. Whaley had two early buckets, UConn scored its first eight points in the lane and jumped out to an 11-4 lead.

Smith hit three shots during a 10-3 run that tied the game and a drive by DeJesus around Vital gave UCF a lead at 18-16.

But the Huskies scored the next nine points, holding UCF off the scoreboard for 3 1/2 minutes.

The Bulls kept the game close and trailed 36-32 at halftime.

The Huskies, led by Whaley, won the game down low, outscoring UCF 48-38 in the paint and outrebounding the Knights 36-28.

Vital said the Huskies, who have now won three of their last four, are thinking about much more than a .500 record.

“I thought that was expected at a program like this,” he said.

In the three games since UConn lost forward Akok Akok to a torn Achilles on Feb. 16, Whaley has averaged 14.6 points and 10 rebounds. Last year, the junior averaged fewer than four minutes and just under a single point per game.

“In recruiting, we'll use him as an example of player development, no doubt,” UConn coach Dan Hurley said.

UConn held UCF to just two 3-point baskets on 13 attempts. The Knights came into the game 7-2 when they hit eight or more 3-pointers in a game. They are now 7-11 when they don't.

UConn: Vital moved past Donyell Marshall and Khalid El Amin and into 13th place on the school's all-time scoring list (1,654). His two 3-pointers extended his American Athletic Conference record to 255.

UCF: The Knights travel to Tulsa for a rematch on Saturday with a team they upset earlier this month in Florida

UConn: The Huskies visit East Carolina on Saturday for their only scheduled meeting with the Pirates this year and the last one scheduled before the Huskies leave the AAC for the Big East after this season.