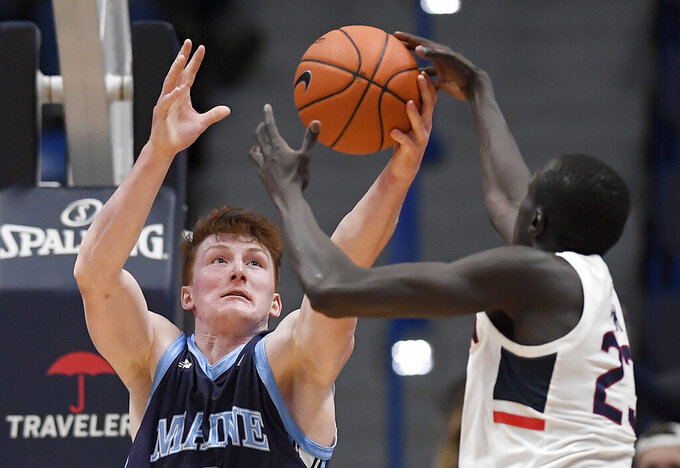 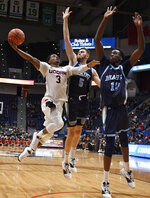 HARTFORD, Conn. (AP) — UConn turned up the defensive pressure on Maine Sunday and turned a close game into a rout.

Alterique Gilbert added 13 points and Tyler Polley had 12 for the Huskies (5-2), who were playing in Connecticut for the first time in two weeks.

Andrew Fleming led all scorers with 16 points for Maine (2-5), which shot just 35% from the floor and made just six baskets in the second half.

“We were active for the most part on the defensive end, which created some turnovers and got us going a little bit offensively,” said Gilbert.

Maine was playing without point guard Sergio El Darwich, who rolled his ankle on Wednesday in a loss to Virginia.

“UConn came out and really got in our shorts today and really made it tough on us,” coach Richard Barron said. “I think it showed we were missing our point guard today. They took advantage of that and they should. There’s no pity in this game.”

It was the first chance for UConn fans to get a look at Booknight, who was suspended for the Huskies’ first three games this season. The freshman had just four points in the first half, but played better after intermission He brought the crowd to its feet late in the game when he followed up his own missed jumper in the lane with a dunk.

“It’s just something I do with my athleticism, just trying to play hard and stay out on the floor,” he said. “I’ve just got to figure out how to make plays when it’s not dropping.”

Brenda Adams scored 11 points. He and Christian Vital each had four steals for the Huskies.

Gilbert hit consecutive 3-points to give UConn an early 11-2 lead over the Black Bears,

But Maine, which was held to 26 in a loss to Virginia on Friday, scored 10 of the next 12 and held UConn scoreless for more than 6½ minutes to stay in the game.

A layup by Maine’s Nedeljko Prijovic sent the teams into halftime with UConn up 31-24.

“I was thrilled with the first two minutes and happier with the last 20,” said UConn coach Dan Hurley. “We could have really broke it open in the first half and had a performance that we could feel a lot better about.”

UConn: Nine players scored for the Huskies, who were without swingman Sid Wilson. The 6-foot-7 sophomore suffered a knee injury in UConn’s 80-55 rout of Miami last week. He had been averaging 4.5 points and 2.3 rebounds this season. Hurley said Wilson could return this week.

IT’S BEEN A WHILE

The 28 turnovers were the most forced by UConn since December 2000, when it also forced 28 against Fairfield. The school record is 35, forced against Lafayette in November 1994.

The Huskies outscored the Black Bears 20-2 on the fast break and got 29 points off the bench. Maine’s starters scored all but six of its points.

Maine, which normally plays man-to-man defense, went to a zone for much of the game and Hurley said that caught the Huskies off guard early. The Huskies shot just 31.3% from the floor in the first half, but 46.2% in the second.

Maine: The Black Bears head to Boston on Wednesday for a game at Northeastern

UConn: The Huskies head back to campus on Wednesday to host Iona