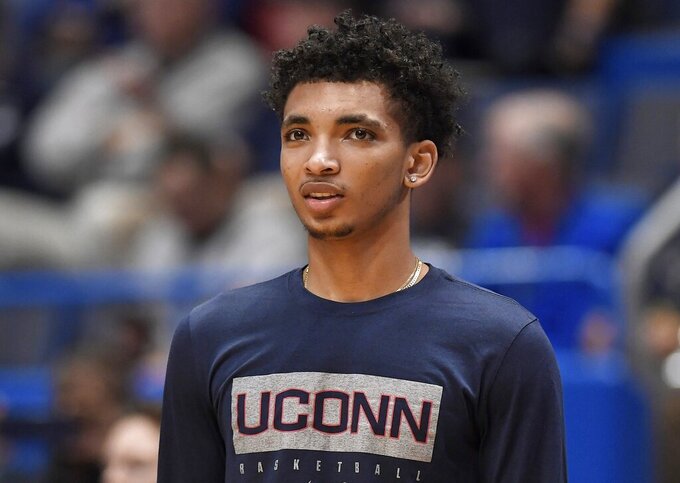 FILE - In this Oct. 30, 2019, file photo, Connecticut's James Bouknight watches his team warm up before an exhibition NCAA college basketball game against Saint Michael's in Hartford, Conn. Bouknight was accepted Monday, Nov. 18, 2019, into the state's accelerated rehabilitation program for first-time offenders, designed to leave him without a criminal record in connection with a September traffic accident. (AP Photo/Jessica Hill)

VERNON, Conn. (AP) — UConn guard James Bouknight was accepted Monday into a probation program designed to leave him without a criminal record in connection with a September traffic accident.

The freshman, who was charged with evading responsibility, interfering with police, driving without a license and driving too fast for conditions, was approved by a Connecticut Superior Court judge for admission into the state’s accelerated rehabilitation program for first-time offenders.

Police say Bouknight smelled of alcohol and fled from an officer after driving another student’s car into a road sign near campus early in the morning of Sept. 27.

Under the terms of his probation, the 19-year-old from New York City must stay out of trouble for a year and pay the car’s owner for the damage to the vehicle.

“I made a terrible mistake,” Bouknight told Judge Hope Seeley. “I would like to apologize to my family, my coaches and my team.”

The car's owner initially told police that about 20 people were in her apartment the night of the accident and her keys had been taken from a counter without permission.

She amended her statement Oct. 13 to say she had been drunk, does not remember giving Bouknight permission to drive the car but did not want to pursue theft charges.

Her family submitted a letter to the court saying it supported accelerated rehabilitation for Bouknight.

Bouknight turned himself in to police Oct. 3 and gave a statement acknowledging responsibility for the crash and saying he had been given permission to drive the car.

The 6-foot-4 guard served a three-game suspension and is expected to play Thursday when UConn (2-1) faces Buffalo in the Charleston Classic.

Outside the courtroom, Bouknight apologized and told reporters he’s learning to be “the student, best athlete, best citizen I can be.”