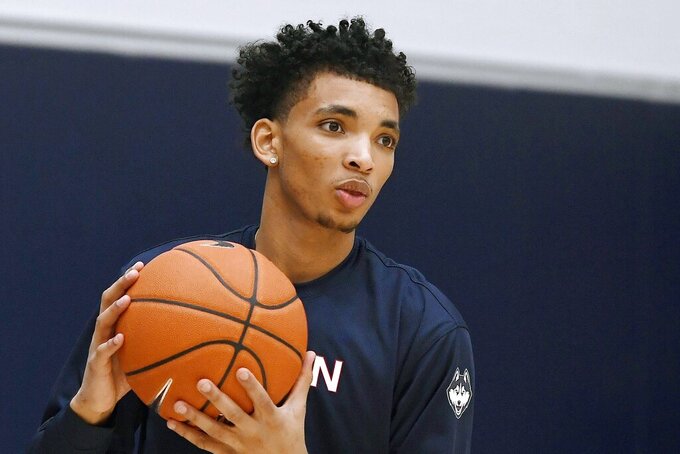 FILE - In this Oct. 18, 2019 file photo, Connecticut's James Bouknight handles the ball during UConn's men's and women's basketball teams annual First Night celebration in Storrs, Conn. Bouknight, facing charges after fleeing from a car accident on Sept. 27, has applied for a probation program that could leave him without a criminal record. (AP Photo/Jessica Hill, File)

ROCKVILLE, Conn. (AP) — The UConn basketball player accused of fleeing from a car accident has applied for a probation program that could leave him without a criminal record.

Freshman guard James Bouknight smelled of alcohol after he crashed a car into a street sign near campus early in the morning of Sept. 27, according to an arrest warrant affidavit.

Police said he fled the scene but later turned himself in. He is charged with evading responsibility, interfering with a police officer, traveling too fast for conditions and operation of a motor vehicle without a license.

Bouknight's attorney filed an application Tuesday for Accelerated Rehabilitation, a program for first-time offenders that when successfully completed results in charges being erased. The program usually involves community service and participants must stay out of trouble for the duration of the probation, often a year.

A hearing on the application is scheduled for Nov. 18.

According to the arrest warrant affidavit released last week, the officer responding to the accident had noted "an odor of alcoholic beverage emitting from Bouknight."

He said the player told him he didn't have identification, tried to restart the car and eventually fled on foot when asked again for ID.

The car's owner, whose name was redacted, initially told police that about 20 people were in her apartment the night of the accident and her keys had been taken from a counter without permission.

She amended her statement on Oct. 13 to say she had been drunk and does not remember giving Bouknight permission to drive the car but does not want to pursue theft charges.

The 19-year-old Bouknight turned himself in to police on Oct. 3 and gave a statement acknowledging his responsibility for the crash, saying he had been given permission to drive the car.