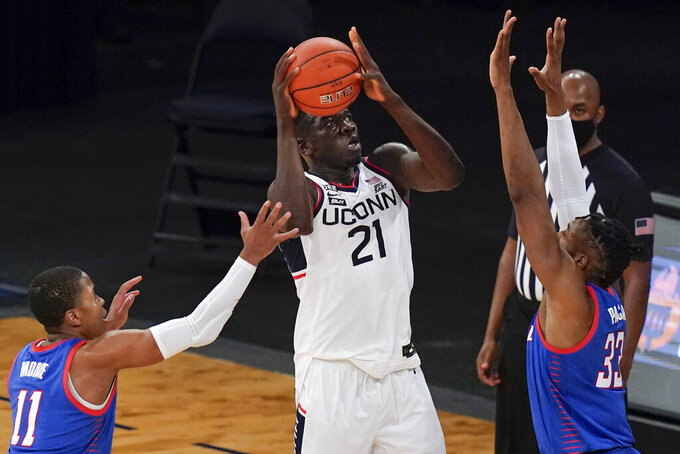 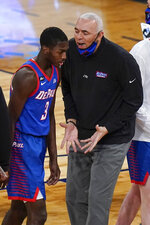 NEW YORK (AP) — The way UConn is playing, they might be the favorite to win the Big East Conference Tournament, especially with top-seeded Villanova making an unexpected exit earlier in the day.

Tyrese Martin had 14 points and 10 rebounds and third-seeded UConn made an impressive return in its first Big East showcase in eight years with a 94-60 quarterfinal victory over DePaul on Thursday night.

R.J. Cole and Adama Sanogo also added 14 points apiece to lead the Huskies to their fifth straight win and seventh in eight games.

James Bouknight added 10 points before sitting out most of the second half with apparent leg cramps.

UConn (15-6) will face No. 17 and second-seeded Creighton in the second semifinal on Friday night at Madison Square Garden. The Bluejays (19-7) ran away from No. 10 seed Butler 87-56 in the third quarterfinal.

“We know how good those guys are,” UConn coach Danny Hurley said of Creighton. “I got a ton of respect for the and they got a hell of a team, a team that has as good a chance as any, you know, to win this championship and they have a team that can make a deep run into the NCAA Tournament next week."

Fifth-seeded Seton Hall (14-12) and eighth-seeded Georgetown (11-12) will play in the first semifinal, starting at 6 p.m. The Pirates beat St. John's in overtime and Georgetown edged No. 14 and top-seeded Villanova, the three-time defending champions.

One of the founding members of the Big East and a winner of seven tournament titles being leaving, UConn spent the past seven years in the American Athletic Conference. It came into this year's tournament as one of the favorites and it certainly lived up to the role in beating DePaul for the third time this season. The 34-point win was its largest of the season and the fourth largest win in the league's tournament history.

The Huskies took the lead for good at 10-7 on a 3-pointer by Cole and they ballooned the margin to 45-22 with a 16-2 run to close the first half. Cole had two 3-pointers in the spurt and Bouknight had six points.

“Quite obviously when you end the season and you end it on a loss, whether it was a night like tonight or a one-point loss, it's disappointing,” DePaul coach Dave Leitao said. “I don't think we came close to playing our best game.”

DePaul: The Blue Demons season is over. Their came into the game with a two-game winning streak in the tournament. They won the last game that was completed in last year's event before the tournament was called off and they surprised sixth-seeded Providence 70-62 on Wednesday night in the first round.

UCONN: The biggest concern for the Huskies was seeing Bouknight helped off the court in the second half because of apparent cramping in his legs. He missed eight games with an elbow injury and didn't play in a game until Feb. 16 so conditioning and stamina might be an issue for the Huskies' leading scorer.

“I think James is just being overly dramatic," coach Danny Hurley quipped, adding that he was getting fluids and treatment after the game. "That’s what you get with these stars, you know?”

Connecticut lost both regular-season games to Creighton. The first one was a 76-74 overtime decision at home on Dec. 20 and the second was 74-66 in Omaha, Nebraska.