UConn rejoins Big East for hoops, other sports; not football 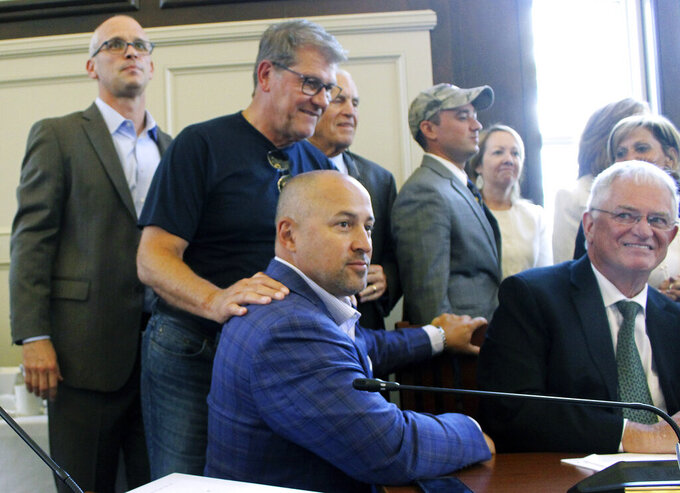 STORRS, Conn. (AP) — UConn is heading back to the Big East.

The University of Connecticut Board of Trustees on Wednesday accepted an invitation to move its basketball and most other athletic teams from the American Athletic Conference.

University President Susan Herbst signed a contract with the Big East that includes a $3.5 million entry fee, and the teams are expected to begin play in the conference in the 2020-21 academic year.

"While we all appreciate the AAC...the board must make a decision that is best for the athletic program," said Tom Ritter, the interim chairman of the Board of Trustees. "At this time, I support accepting the Big East invitation as a better overall fit and, in my opinion, best for our program and student athletes."

The move is designed energize the school's fan base by renewing some old rivalries. It also means an end to costly road trips to states such as Texas, Oklahoma and Florida for conference games. UConn is currently dealing with a deficit in its athletic division of more than $40 million.

The school hasn't indicated what it plans to do with its football program, a sport not offered by the Big East. But as part of the contract with the Big East, UConn has agreed not to seek football membership at this time in any Power Five conference and to pay a $30 million exit fee if it leaves the Big East during its first six years of membership. The fee would eventually drop to $15 and later $10 million.

Herbst said she and athletic director David Benedict will hold off on commenting until an official announcement from the Big East. That's scheduled for Thursday at a noon news conference at Madison Square Garden, an arena that's hosted several iconic moments in UConn basketball history.

"This is a Big East process and we need to respect their process," Herbst said. "UConn nation and the news media have a lot of questions, I know that. All of them will be answered. But we've got to follow the Big East, so hold tight."

UConn was a charter member of the Big East, which was formed in 1979. The Huskies never actually left the conference. The American was formed by UConn and the other remaining conference schools in 2013 after the league's basketball-focused private schools broke away, eventually negotiating to take the conference name with them.

UConn is expected to add cache to the basketball league. But women's basketball coach Geno Auriemma cautioned on Monday that it won't be the league fans remember.

"It's like saying you're moving back to your hometown, but the block that you lived on and half the city is gone," he said. "It's not the same."

But Auriemma said his team's success has not depended on what conference it is in.

The school added another men's title and three more women's championships as members of the American.

The UConn women have never lost to an American Athletic Conference opponent, going 120-0 in the regular season and six conference tournaments.

UConn football also found some success in the Big East. The teams went to five bowl games, including the 2011 Fiesta Bowl. But when Big East football collapsed, so did the Huskies' program. It has a record of 28-69 since that season.

Football coach Randy Edsall said he's not sure what the future of his sport will look like at the school.

"The Board of Trustees, University Leadership and the Athletic Director made the decision that this was in the best interest of our 22 intercollegiate teams, hundreds of student athletes, fans and our future," Edsall said in a statement. "With the decision, it leaves our football program in transition at this point in time, but the Board of Trustees, University Leadership and Athletic Director will make the decision that they feel is best for our Football program moving forward."

Not everyone is pleased with the move. UConn football season-ticket holder Tom McDougall made the 40-minute drive from west Hartford to address the board. He said the vote means they don't care about him or other football fans.

UConn officials expressed displeasure with the AAC in March when the conference and ESPN announced a new 12-year television contract. The deal was designed to increase revenue for the league's schools from about $2 million to $7 million a year, but it put many games on ESPN-plus, the company's subscription digital platform.

The Big East has a 12-year, $500 million media rights deal with Fox Sports that was signed in 2013. That deal pays members more than $4 million annually.