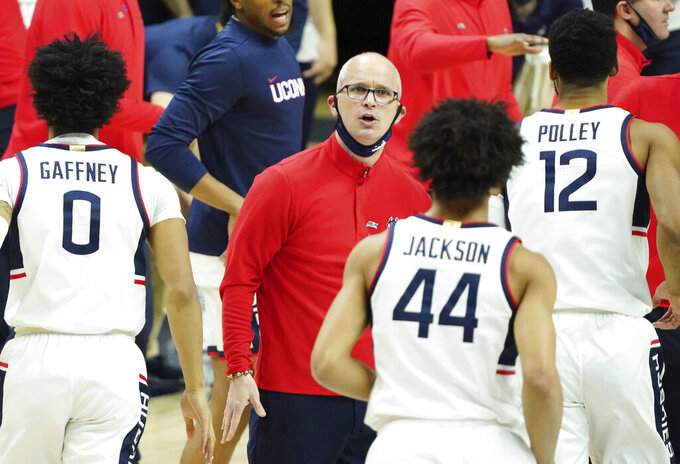 Connecticut head coach Dan Hurley greets his players a break against Georgetown in the first half of an NCAA college basketball game Saturday, March 6, 2021, in Storrs, Conn. (David Butler II/Pool Photo via AP)

NEW YORK (AP) — Connecticut returns to the Big East Tournament in a familiar position after an eight-year absence.

Highly seeded and maybe the hottest team in the conference, the Huskies head to Madison Square Garden as one of the favorites to win it all.

The tournament starts Wednesday with three games, and the top teams join the fun Thursday, including third-seeded UConn. Semifinals are scheduled for Friday night, and the championship is set for Saturday if all goes well.

Wednesday will be two days short of exactly one year since college basketball came to a screeching halt because of the coronavirus outbreak.

As conference after conference shut down its basketball tournaments on March 12, 2020, the Big East allowed St. John's and Creighton to play the first half of a quarterfinal before it called off the rest of its games.

“I still think about that game. Every time we talk about the tournament that’s all I think about,” St. John’s guard Greg Williams Jr. said. “I hope that doesn’t happen again because we have looked forward to this moment this whole year.”

Almost every team in the Big East has dealt with some type of COVID-19 disruption, but as of Tuesday all are expected to participate in the tournament.

“We survived it really,” said Villanova coach Jay Wright, whose Wildcats are the top seed. “I’ve never felt like we’ve been able to get this team playing like a Villanova basketball team. I don’t think it’s anybody’s fault.”

There are even plans for a few spectators to be at the Garden. Mostly friends and family of the teams will be attendance as no tickets were made available to the public.

It's safe to say no team is looking forward to being back in midtown Manhattan as much as UConn.

The Huskies have won the Big East Tournament seven times, tied with Georgetown for the most. They last appeared in the tournament in 2012, their second-to-last season in the Big East. The Huskies did not participate in the postseason in 2013 because of NCAA-related sanctions.

When the conference splintered from its 15-team days, UConn went with the major college football schools to form the American Athletic Conference. The basketball-focused Catholic schools took the Big East name and the deal with Madison Square Garden to host the tournament.

The Huskies' time in the American started great. UConn won its fourth and last national championship in 2014. The program backslid after that and has not made the NCAA field since 2016.

Hoping to give basketball a boost, the Huskies returned to their roots and rejoined the Big East in 2020. So far, so good.

Third-year coach Dan Hurley, a former Seton Hall point guard from New Jersey, has the Huskies rolling into the Garden.

UConn won four straight and six of seven to close the season.

The final six games of that stretch coincided with the return to the lineup of James Bouknight. The sophomore missed more than a month with an injury to his left elbow and leads the team in scoring at 20.2 points per game.

Bouknight has UConn looking good for an at-large bid to the NCAA Tournament if it falls short of a Big East title. He also has Huskies fans conjuring memories of Kemba Walker and Shabazz Napier, who used magical runs through conference tournaments to launch their teams to surprising national titles.

“For us to be a factor deep into the Big East tournament or to win games in the NCAA Tournament, you’ve got to maintain a very high level of play,” Hurley said Saturday. “But if we defend and rebound at a high level, and be the hardest-playing team on the court and can make some 3’s, we’ll be tough to beat.”

UConn plays the winner of sixth-seeded Providence vs. No. 11 DePaul in the final game of a quadrupleheader Thursday.

Villanova is short-handed heading into the postseason.

That loss comes on the heels of point guard Collin Gillespie tearing a knee ligament last week that ended his season. The 14th-ranked Wildcats, who have won the last three Big East tournaments played to completion, play the winner of Marquette-Georgetown in Thursday's first game.

Creighton coach Greg McDermott will be back on the sideline for the 17th-ranked and second-seeded Bluejays when they play Thursday against the winner of the Xavier-Butler.

Creighton on Monday lifted a suspension on McDermott for making racially insensitive remarks to his players during a postgame talk two weeks ago. McDermott twice used the term “plantation” as part of an analogy urging team unity. He apologized but was suspended last week for one game.

Fifth-seeded Seton Hall (13-12, 10-9) might have played its way right out of the NCAA Tournament by dropping its last four regular-season games. In desperate need of a big showing this week, Sandro Mamukelashvili and the Pirates face No. 4 seed St. John’s in the quarterfinals Thursday -- five days after blowing an 18-0 lead in an 81-71 road loss to their Hudson River rivals.

The Pirates and Red Storm (16-10, 10-9) could be an NCAA eliminator. Xavier is also hoping to get off the bubble and into the field.