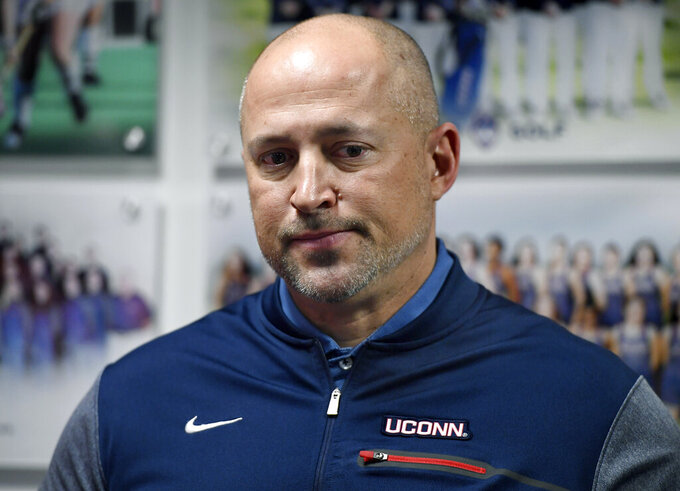 Connecticut athletic director David Benedict holds a news conference in his office at the University of Connecticut, Saturday, Jan. 19, 2019, in Storrs, Conn. Benedict says the school has not ruled out eliminating some sports to close a more than $40 million gap in its athletic budget. (AP Photo/Jessica Hill)

STORRS, Conn. (AP) — UConn won't rule out eliminating some sports to close a more than $40 million gap in its athletic department budget.

Athletic director David Benedict, speaking before Saturday's men's basketball game with Tulane, said there remains a strong belief that UConn has become a nationally renowned university in part because of its sports success.

But he said the athletic division must examine how it is structured. He says UConn will look at all opportunities to increase revenue and cut expenses before considering cutting a sport.

"There's a lot of athletic departments over the past few years that have had to do that," Benedict said. "It's probably one of the most difficult things you can do as an athletic director and an athletic department. We're going to look at all opportunities to try to deal with this prior to that, but sometimes there's inevitabilities."

The school, with most of its athletic programs in the American Athletic Conference, struggles to compete fiscally with similar programs in the higher revenue-generating Power Five conferences — the Big Ten, Big 12, Atlantic Coast Conference, Southeastern Conference and Pac-12.

The school reported receiving $7.1 million in conference distribution funds last year and another $1 million in media rights, down from $7.3 million reported in 2017. By comparison, the average school distribution for the Southeastern Conference was reported to be about $41 million and Big Ten schools reportedly received an average of about $38.5 million.

Benedict said he believes new media rights contract for the AAC, which is currently being negotiated, could help the school "make a dent" in the budget gap.

Benedict also said he believes Friday's announcement of self-imposed sanctions on the basketball program, which include a loss of a scholarship next season, are an appropriate response to NCAA violations under former coach Kevin Ollie.

Those violations included Ollie lying about arranging video calls between recruits and former Husky greats Ray Allen and Rudy Gay, having improper contact with recruits, providing impermissible meals to recruits, shooting baskets with a recruit, holding improper workouts and providing free tickets to an athletic trainer who hosted improper training sessions both on campus and in Georgia, which amounted to gifts.

Ollie, who was fired after a 14-18 season last year, is challenging the school's decision to withhold more than $10 million from him as a result of being fired "for cause". He has asserted that any violations were minimal and isolated. He has also alleged his firing was in part racially motivated, pointing out that violations under former coach Jim Calhoun, who is white, did not lead to Calhoun's firing.

"This is certainly something that we'd prefer not to be dealing with right now, but we're going to handle it in the best way we possibly can and move forward," he said.

Benedict also defended handing out thousands of dollars in bonuses to UConn football coach Randy Edsall and his staff despite a 1-11 season, saying the coaches' base salaries are among the lowest in the conference and he has no problem incentivizing performance.