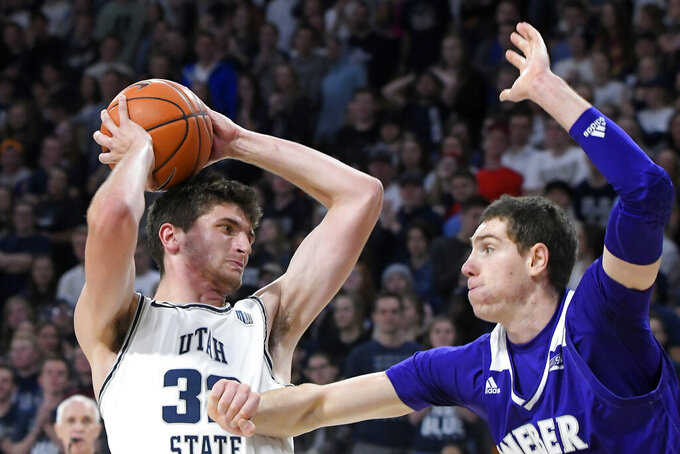 FILE - Utah State center Trevin Dorius (32) looks to shoot the ball as then-Weber State forward Dima Zdor, right, defends during the second half of an NCAA college basketball game Friday, Nov. 8, 2019, in Logan, Utah. Zdor now plays for Grand Canyon. Ukrainians playing college basketball in the United States have tried to keep up their routines as Russia invades their home country. One of a handful of Ukrainians playing college basketball in the United States, Zdor can only watch from afar as Russian troops roll through his home country, hoping his family and friends remain safe. (AP Photo/Eli Lucero, File)

PHOENIX (AP) — Grand Canyon junior center Dima Zdor has tried to maintain a routine, a mix of schoolwork, practice and games. His attention for all the other hours in the day is halfway across the world.

One of a handful of Ukrainians playing college basketball in the United States, Zdor can only watch from afar in Phoenix as Russian troops roll through his home country and hope his family and friends remain safe.

“I watch a lot of news from back home and it’s just upsetting how little villages and towns are getting destroyed and overtaken, just for the reason of politics," he said. "It’s sad. It’s scary. It’s uncomfortable to open Twitter or watch the news every day and be scared of what’s going on there that could affect my family, friends or team back home.”

Russia's invasion has taken a massive toll across Ukraine as bombs pound cities in the Eastern European country. More than 1 million people have fled the country as Russian forces advance, millions more are stuck in the crossfire, many hiding underground.

Watching it unfold from long distance is excruciating, a helplessness overtaking Ukrainian players as they watch the news, follow social media, try to communicate with family and friends back home.

“It is difficult mentally,” said Denys Bobchuk, a sophomore at Spring Hill College in Mobile, Alabama. “Personally, I feel guilt just because my people are going through some rough things right now. And I’m here, I’m safe and there’s not much I can help with.”

The tension started when it appeared Russia was going to invade Ukraine. It intensified tenfold when the bombs began to fall and the troops crossed the borders.

Communication with Ukraine has been spotty at times. Hours without contact with family members is agonizing, days even worse.

The endless anxiety also comes with an attempt to understand why their home country is being invaded.

“It’s not OK. We live in this time where we have medicine, science, all this stuff and we’re still having war," San Francisco center Volodymyr Markovetskyy said. “Why is that happening? I don’t understand, my family doesn’t understand, nobody does.”

Markovetskyy's mother and sister were able to escape to Lithuania, but his father, a police officer, had to stay in Ukraine.

Zdor's parents, sister and numerous other relatives are in Ukraine and Crimea, which was occupied by Russia in 2014.

George Maslennikov, a senior forward at Canisius, is from Odessa and had some nervous moments when neither he nor his father, who's in Spain, were able to reach his mother Tetyanna while the city is under siege.

“I’m trying to keep my mindset positive as much as I can, though it’s difficult even without things like that going on back home since I only see my family once a year,” he said.

The Ukrainian players here still try to do what they can from afar, raising awareness on social media and funds for the military effort.

Bobchuk is trying to create a fund to raise money for soldiers in Ukraine and has contacted American manufacturers to send bulletproof vests to military friends back home.

Maslennikov has donated on a bank app to send money to the Ukrainian military, encouraging others to do the same through social media.

“It just takes a lot of courage to do things like that and having this country as small as ours to fight against Russians,” he said. "People thought it was going to be easy, but it’s just not. I’m trying to support it as much as I can even though I’m so far from home and I’m worried about them, but I’m doing as much as I can.”

But there's only so much the Ukrainian players can do from so far away. Much of their time is spent watching, waiting, keeping tabs on everyone back home.

Sticking to a routine is a key, takes the mind off what's happening — at least for a little while.

“It just feels not right to me, but at the end of the day, I think it is important to understand that I’m here and the only thing I can do is to do my job, which is playing basketball right now at the highest level," Bobchuk said. "And that’s what I’m trying to do right now, just trying to focus on something that I’m involved in and just have my daily routine and following it.”