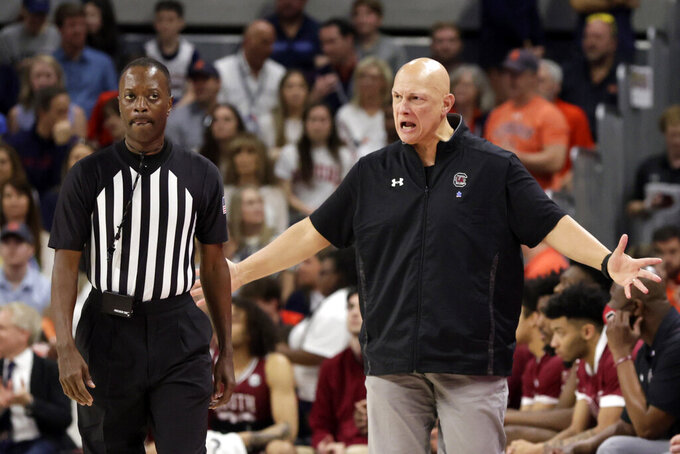 South Carolina head coach Frank Martin reacts to a call during the first half of an NCAA college basketball game against Auburn, Saturday, March 5, 2022, in Auburn, Ala. (AP Photo/Butch Dill)

AMHERST, Mass. (AP) — UMass has found a new leader for its basketball program, hiring Frank Martin as its coach Friday.

Martin, 56, takes over the Minutemen program from Matt McCall, who was fired this month after going 58-81 over five seasons in Amherst.

“It is evident that there is tremendous alignment in place to win and do it the right way,” Martin said in a statement. “Let’s all get on this ride together, let’s dream big and let’s be relentless at making our dreams a reality.”

Martin arrives following his own dismissal from South Carolina last week after 10 seasons and just one NCAA appearance with the Gamecocks. But that appearance to cap the 2016-17 season culminated in South Carolina’s first Final Four berth. Martin was 171-147 during his tenure at the school.

He had more NCAA tournament bids in his first head coaching job at Kansas State from 2007 to 2012, leading the Wildcats to March Madness four times including an Elite Eight berth in 2010. He finished 117-54 overall.

The move to Massachusetts will be a homecoming for Martin’s wife, Anya (Forrest), a 1998 UMass alum who ran track for the school.

Martin’s hiring by UMass was announced a day after former Chattanooga coach Lamont Paris was tapped as Martin’s successor at South Carolina.