Unbeaten Zags hope to take next step against Creighton 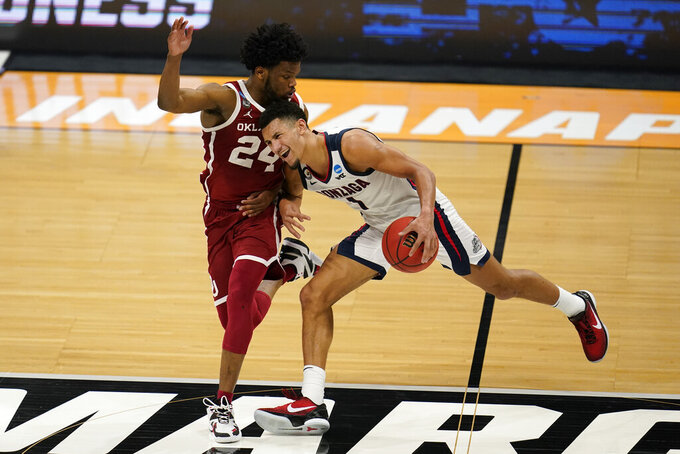 Gonzaga guard Jalen Suggs (1) is fouled by Oklahoma guard Elijah Harkless (24) in the second half of a second-round game in the NCAA men's college basketball tournament at Hinkle Fieldhouse in Indianapolis, Monday, March 22, 2021. (AP Photo/Michael Conroy) 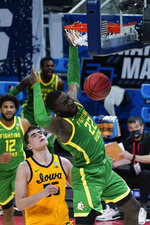 Even coach Mark Few couldn't resist, though he added some instructions — focus on basketball, maintain perspective and ignore the chatter — as well as a warning.

“There’s a week or, hopefully, two left in the season," he said. “These guys are competitive and they’re smart competitors and they know from here on out that every team is more than capable of taking us down."

Sure, Few sounds like a candidate tamping down expectations before at an election rally, even a small one that might be tempted to break out the “Four more!” chant during Sunday's West Region semifinal against fifth-seeded Creighton.

Reaching this destination is hardly uncharted territory for the Zags: it's their 11th Sweet 16 trip. Making it this far unscathed, 28-0, and as a double-digit favorite certainly is different for a team that's routinely been serenaded with questions about whether it was as good as the record indicated.

Now with Creighton set to play its first Sweet 16 game since 1974, the Bluejays believe they have what it takes to do what nobody else has this season.

“I think where teams run into problems with them is they play 32 minutes, 33 minutes or they start the game comfortable or they start to relax and then Gonzaga goes on those runs," Creighton guard Mitch Ballock said. “You have to stay locked in for 40 minutes and just keep coming and keep attacking. They're an unbelievable team."

But maybe not unbeatable.

While most acknowledge it's been less than fun spending so much time inside their hotel rooms, the NCAA's version of a bubble has allowed Gonzaga to stay more isolated from the media, family, friends and fans, which could help them stay focused on completing a journey only seven teams and four schools in men's basketball have ever completed, none since Indiana in 1975-76.

All they need are four more wins.

“I thought there would be some teams that would do it before this," former Hoosiers star Scott May said. “It's hard to do. Every game is important and now as you go down to the Elite Eight or Final Four it gets even harder. But they've got an opportunity. So I wish them well and would welcome them to the club, the undefeated club ."

Southern California won one more game than Oregon this season and beat the Ducks in the lone head-to-head contest. The Ducks were still crowned Pac-12 regular season champs based on winning percentage.

In Sunday's second semifinal, the two league rivals will meet again with something to prove.

“I wanted this game in the Pac-12 Tournament and we didn't get it then," Oregon forward Eugene Omoruyi said. “So I’m happy to get it now. I’m ready to go. We’re all ready to come out and compete."

What Omoruyi remembers from the first game, which USC won 72-58 on Feb. 22, was the seventh-seeded Trojans' fast start and Oregon playing catch-up. The Ducks (21-6) never fully recovered during their fifth game in an 11-day stretch.

Sixth-seeded Oregon doesn't have a starter taller than 6-foot-6 and relies heavily on 3-point shooting. Southern Cal prefers a bigger, more physical lineup featuring the Mobley brothers — Isaiah and Evan — and don't mind mixing it up. It's how the Trojans (24-7) made it back to the Sweet 16 for the first time since 2007 and now have a second chance to demonstrate they are better than Oregon.

“Look, it’s nobody’s fault that Oregon played two less league games than us, that’s just the way it worked out," coach Andy Enfield said. “They went 14-4, we were 15-5 and so the rules were the percentage would decide it and even though they didn’t play a full schedule, they had a great season. To us they’re a top 10 team in the country and we're going to have to play our best to win."