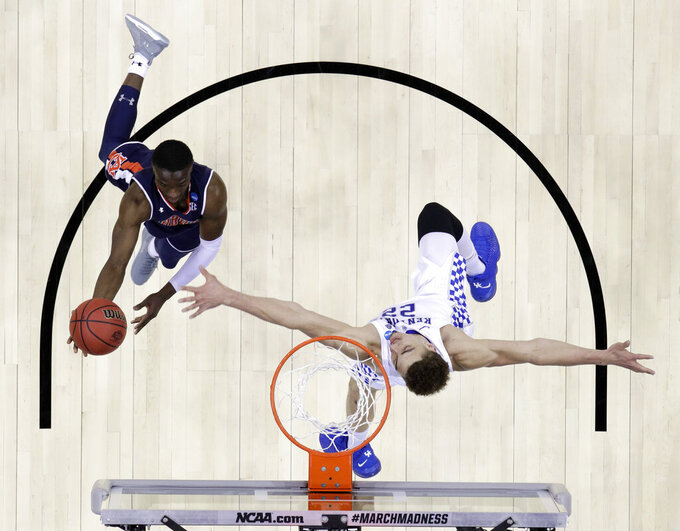 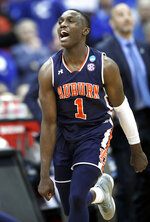 AUBURN, Ala. (AP) — Jared Harper might just epitomize this Auburn basketball team: overlooked, undersized and playing about as well as anybody.

The Tigers' 5-foot-11 point guard has been a driving force in their surprising run to their first Final Four. He has supplied clutch plays , especially against Kentucky, blink-and-you-miss-it drives and 3-pointers.

Now, Harper and Auburn face top-seeded Virginia on Saturday in Minneapolis. The diminutive junior is coming off the biggest performance of his career, a 26-point, five-assist, four-rebound, three-steal stat sheet stuffer against the Wildcats.

"I can only speak for Jared, and just tell you that size does matter, but it's never been a factor for him," Auburn coach Bruce Pearl said. "He uses speed and quickness to be able to define his game. I've seen him in many major moments and the moments haven't been too big for him."

Or for Auburn, so far.

Harper scored the final points of regulation on a scooping layup against Kentucky, then added 12 of Auburn's 17 overtime points en route to a 77-71 upset.

That performance now has a program that ended a 15-year NCAA Tournament drought a year ago only two wins away from a national title — which is pretty much like Harper predicted when the high school teammate of Cleveland Cavaliers guard Collin Sexton arrived at Auburn as the point guard Pearl badly needed.

"When he first came to Auburn, he said he wanted to have an ESPN '30 for 30' story on how he led Auburn to a championship and brought them back," said Patrick Harper, his father and a high school coach. "I said, 'Yeah, right. We're not that good.'

"He had that vision. I still remind him that he said it and he believed it. He set the goals high."

Harper has been a centerpiece of Auburn's rebuild, along with sharp-shooting guard Bryce Brown and versatile forward Chuma Okeke, who tore the ACL his left knee in the Sweet 16 against North Carolina. Six-foot-11 center Austin Wiley dealt with injuries this season and mostly comes off the bench for limited minutes.

Harper, meanwhile, has started 103 games over the past three years, and his numbers have climbed across the board every year.

"I wouldn't have thought that they were a Final Four-type team until I realized how good the point guard was," said former Auburn coach and current radio color commentator Sonny Smith.

The NCAA Tournament has thrust Harper — and the Tigers — onto the national stage. His huge game against Kentucky helped Auburn overcome the emotional loss of Okeke.

He demurred on taking too much credit after that game, citing the play of teammates like Samir Doughty and Brown.

"That gives me confidence going into overtime to be able the make those plays because I have the same confidence in them to make plays," Harper said.

He has more than held his own in three straight games against teams with point guards who were five-star recruits, according to the 247Sports composite ranking of the major recruiting sites.

Kentucky has Ashton Hagans, North Carolina has Coby White and Kansas has Devon Dotson. And Auburn is perfectly happy with Harper, who wasn't quite blue-chip enough to get recruited by any of those blue bloods.

Harper wasn't a finalist for the Bob Cousy Award given to the nation's top point guard, and he wasn't among the eight players who Southeastern Conference coaches picked for the all-conference team. Neither was Brown or Okeke, for that matter.

"I don't think he does play (ticked) off or with much of an edge," the coach said. "I think it's because he's always played that way. He's always been overlooked. So, he just goes about his business and it'll be like that in the NBA for him.

"There are 30 teams in the league, and most of them won't want an undersized point guard, but there will be a couple that are smart enough that will. He'll make his way onto one of those rosters, and then they'll see the value."

He is averaging 15.4 points per game and is tied for the SEC lead with 5.8 assists per game. He is third in free-throw percentage and fourth in both 3-pointers made per game and assist-turnover ratio.

Harper is the pacesetter for Auburn's frequently up-tempo style.

He also is pretty good at predictions, including one he made the morning of the Kentucky game.

"He said, 'Dad, we're going to win this game and I'm going to have a big game,'" the proud father recalled. "And he delivered."