Upsets have become the norm at NCAA Tournament 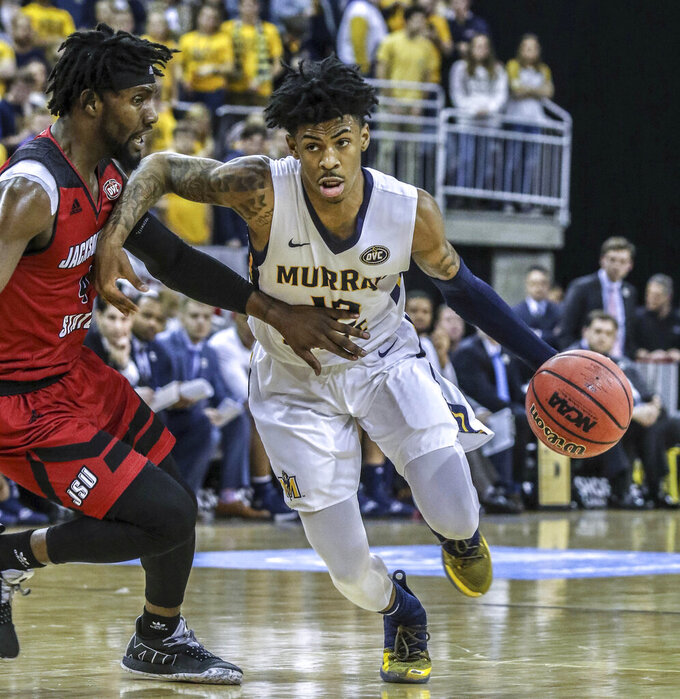 Murray State's Ja Morant gets past Jacksonville State's Ty Hudson during the semifinals of the Ohio Valley Conference Men's Basketball Championship at the Ford Center, Friday, March 9, 2019, in Evansville, IN. (Greg Eans/The Messenger-Inquirer via AP)

LAS VEGAS (AP) — Picking a perfect bracket has become a nearly impossible act, the ritual of ripping up brackets an annual rite of the NCAA Tournament.

UMBC proved the point early last year by beating Virginia to become the first No. 16 seed to topple a No. 1 in tournament history. Loyola-Chicago proved it late by taking Sister Jean all the way to the Final Four.

No Retrievers or Ramblers in the bracket this year, but as always, there will be upsets.

Here are a few games to keep an eye on:

No. 12 Oregon vs. No. 5 Wisconsin, South Region. The Ducks are one of the bracket's hottest teams, finding a late-season defensive groove to become the second team to win four games in four days at the Pac-12 tournament. Don't expect a lot of points either way.

No. 12 Murray State vs. No. 5 Marquette, West Region. The Racers have Ja Morant, the type of player who can singlehandedly lead his team to a win. Marquette has a similar player in Markus Howard, but lost its final four regular-season games and was bounced from the Big East tournament by Seton Hall.

No. 11 Saint Mary's vs. No. 6 Villanova, South Region. The Gaels proved they can play with anyone by beating top-ranked Gonzaga in the WCC title game. The defending national champion Wildcats became the first team to win three straight Big East titles, but had some shaky moments early in the season.

No. 13 UC Irvine vs. No. 4 Kansas State, South Region. The Anteaters enter the NCAA Tournament on a 16-game winning streak and have won 30 games. The Wildcats were the co-Big 12 regular-season champions, but senior forward Dean Wade was still in a walking boot as of Sunday.

No. 16 Gardner-Webb vs. No. 1 Virginia, South Region. Surely it can't happen again? You never know in March.

THE OTHER STAR PLAYERS: Everyone knows about Zion Williamson. Even casual college basketball fans know about Duke's dunking phenom and his blown out shoe.

But this year's NCAA Tournament is filled with plenty of other great players, some fans may not know much about.

Ja Morant, Murray State. The Racers' dynamic guard has a knack for what's known as "catching bodies," or dunking over bigger opponents. He led the nation in assists, was eighth in scoring and turned himself into a potential NBA lottery pick during his sophomore season.

Markus Howard, Marquette. The undersized guard has range from near midcourt, a wicked step-back 3-pointer, scores on floaters and dashing drives to the hoop. The nation's fifth-leading scorer had 53 points in one game, 45 in two others.

Sam Merrill, Utah State. The Mountain West Conference's player of the year does a little bit of everything, averaging 21 points, 4.2 assists and 3.9 rebounds.

Miye Oni, Yale. A former DIII commit, the 6-foot-6 guard has developed into a legit NBA prospect. LSU will certainly pay a lot of attention to him in their NCAA opener.

PITINO VS. LOUISVILLE: The NCAA Tournament's selection committee is known for setting up intriguing matchups that are sure to get people talking.

Richard Pitino facing Louisville in the first round is a doozy.

The Minnesota coach is the son of Rick Pitino, who was fired by the Cardinals last year after the program was involved in a federal investigation into college basketball recruiting.

Richard Pitino, once an assistant coach under his father at Louisville, led the Gophers back into the NCAA Tournament for the first time since 2017.

The Cardinals are back in the NCAA Tournament after missing the bracket amid the chaos last season.

The game should be a good matchup, but the buildup will be about Pitino facing Louisville for the first time since his father was fired.

"It's not going to be about me," Richard Pitino said. "I'm not going to be it's revenge or anything like that. It's about our players, it's about this program. We worked really, really hard to put ourselves in position to be one of the 19 percent that gets to make the NCAA Tournament in college basketball."

FEEL-GOOD FINALE: Temple coach Fran Dunphy has announced that this season will be his last after nearly 50 years of coaching.

The Owls will be sending the 70-year-old coach off with his first NCAA Tournament appearance since 2016.

Temple found itself on the NCAA Tournament bubble after losing its AAC tournament opener to Wichita State. After some anxious moments on Selection Sunday, the Owls learned they would be in the First Four against Belmont on Tuesday.