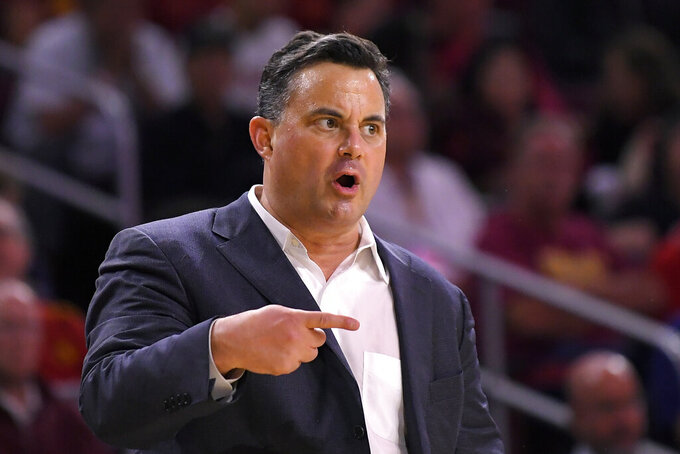 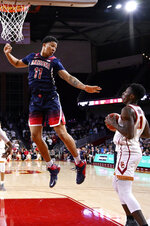 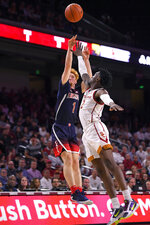 LOS ANGELES (AP) — Onyeka Onkongwu scored 11 points, including a three-quarters court shot, and grabbed 10 rebounds as Southern California gave its NCAA Tournament hopes a boost with a 57-48 victory over Arizona on Thursday night.

Trailing 21-20, Elijah Weaver hit a jumper and a 3-pointer and Okongwu finished the 8-0 run with his long shot as the half ended for a 26-21 lead. The Trojans (20-9, 9-7 Pac-12) didn’t give up the lead after that as the Wildcats suffered through a miserable offensive performance, making just 3 of 26 3-point attempts and getting just one more field goal than their turnover total of 15. They came into the game as the conference's high-scoring team at 78.1 points per game but left with their lowest point total of the season.

A basket by Stone Gettings got Arizona (19-9. 9-6) within three points with just under four minutes left in the game but the Trojans went 7 of 10 at the line over a 1½-minute span for their biggest lead of 11 with 26 seconds remaining while the Wildcats missed six straight shots.

Arizona's Zeke Nnaji scored 15 points with 10 rebounds for his conference-leading 13th double-double. Nico Mannion added 11 points but on 2-of-14 shooting, including 1 of 7 on 3-point tries. The Wildcats shot just 28%.

After USC got the game’s opening basket Arizona went on a 9-2 run only to be answered by an 11-0 surge from the Trojans that began a 16-5 run over 11 minutes. Arizona responded with a 7-0 run before USC scored the last eight points in the final two minutes of the half, five from Weaver plus Okongwu’s long shot.

Freshman Josh Green, Arizona's third-leading scorer at 11.9 points per game, didn't make the trip to Southern California because of a lower back sprain. He missed his first start of the season and will be absent again for the Wildcats' next game on Saturday at UCLA. Ira Lee made his first start in Green's place and scored six first-half points. Also missing the game was reserve wing Max Hazzard because of what the school said were “personal reasons.”

USC lost at Utah 79-65 on Sunday with third-leading scorer Nick Rakocevic seeing only five minutes of time because of a stomach bug and No. 2 scorer Jonah Mathews struggling through 23 minutes, also dealing with the illness. Isaiah Mobley had a sore ankle which limited him to nine minutes. Thursday, Mathews only shot 4 of 19 but still led the Trojans in scoring against the Wildcats. Rakocevic didn't score in just 11 minutes and committed four fouls. Mobley scored eight points.

Arizona: The Wildcats, who had won four straight conference road games before Thursday's loss, came in ranked seventh in the NET rankings. They damaged their hopes of a top-four seed and a bye for the Pac-12 tournament.

USC: The Trojans, considered a bubble team, avenged an 85-80 loss at Arizona on Feb. 6 and improved their NCAA Tournament resume in the process. ... USC reached 20 wins for the 21st time in school history.