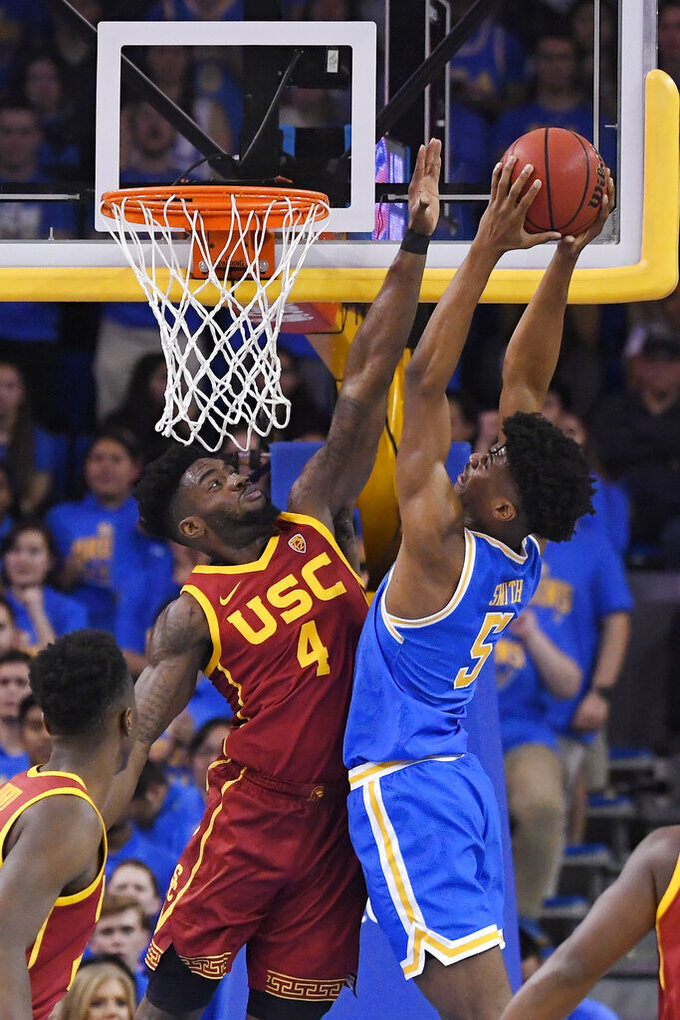 LOS ANGELES (AP) — Nick Rakocevic is a senior, so time is running out for him to enjoy beating UCLA.

He got a chance to savor such a win with 17 points and 14 rebounds for Southern California, a 74-63 victor over the Bruins on Saturday night. It was the Trojans' seventh win in eight games.

“I really wanted this bad,” Rakocevic said. “It was really important to me to get this win.”

Fellow senior Jonah Mathews added 16 points and Ethan Anderson, a freshman playing in the rivalry game for the first time, had a career-high 14 points despite rolling his ankle and briefly leaving the court midway through the second half.

The Trojans (13-3, 2-1 Pac-12) bounced back from a 32-point loss at Washington last week in which they scored a season-low 40 points. Rakocevic had six points and eight rebounds in that game.

Chris Smith scored 11 of his 16 points in the first half and grabbed 10 rebounds, and Jalen Hill added 14 points for UCLA (8-8, 1-2), which never got a sustained run going in front of 13,659, their first sellout and most spirited crowd of the season.

After being limited to six points in the first half, Rakocevic contributed to a dominant stretch when the Trojans extended their lead to double digits for the first time. He twice had back-to-back baskets, including a dunk, before Mathews hit a 3-pointer that gave USC a 58-44 lead.

“Nick really played like a senior,” USC coach Andy Enfield said. “This is a great win for us, especially on the road. They have a lot of talent over there.”

UCLA stepped up its defense over the final four minutes, going to a full-court press and man-to-man, but the Trojans were undeterred. Anderson passed along the baseline to Daniel Utomi in the left corner and he connected on a 3-pointer for a 66-57 lead.

“Our defense in the second half was as bad as it can get. They hit a couple backbreaking 3s at the end of the shot clock,” Bruins coach Mick Cronin said. “Their offensive toughness against our pressure was a key. They only had 11 assists, but they passed the ball well and were strong with the ball.”

The Bruins went 13 of 18 from the free throw line in the second half, when they were 9 of 25 from the field in front of former UCLA greats Kareem Abdul-Jabbar, Sidney Wicks, Jamaal Wilkes and Earl Watson.

The Trojans' biggest lead was five points in the first half when the Bruins were ahead just once.

USC: The Trojans went 2-1 on the road to open league play and showed poise under late pressure by the Bruins. They had four players in double figures but none of them was star freshman Onyeka Okongwu, who was held to four points and two rebounds because of four fouls. “That can take a toll on you mentally,” Rakocevic said. “We are going to definitely need Big O down the stretch.”

UCLA: The Bruins have lost five of six and are mired near the bottom of the Pac-12. They lack a big-time scorer and continue to have to rely on a variety of players for offense.

UCLA: Hosts Stanford on Wednesday in the middle of a three-game homestand.