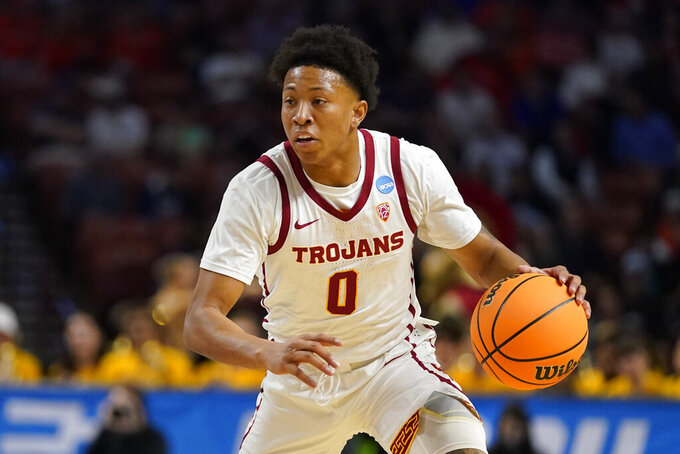 FILE - Southern California guard Boogie Ellis plays against Miami during the first half of a college basketball game in the first round of the NCAA tournament on Friday, March 18, 2022, in Greenville, S.C. The Trojans open the season at home on Nov. 7, 2022, against Florida Gulf Coast. (AP Photo/Chris Carlson, File)

There’s a big question surrounding freshman Vince Iwuchukwu, however. His playing status is up in the air after the 7-foot-1 center collapsed during an informal team workout in early July. He was signed as the latest in a line of big men who moved on to the NBA.

With Isaiah Mobley leaving early to join his brother and 2020-21 Pac-12 player of the year Evan Mobley in the NBA, the Trojans were counting on Iwuchukwu to help fill the void.

Now, they'll have to wait and see.

The Trojans reached the Elite Eight last year, the best result in the NCAA Tournament in over two decades at a school known primarily for its football program.

The Trojans were among others receiving votes in the AP Top 25 preseason rankings.

They open the season on Nov. 7 at home against Florida Gulf Coast, the school Enfield left to join USC nine years ago. They play their first four games at Galen Center before getting an early-season test at the Battle 4 Atlantis in the Bahamas. Among their possible opponents at the Thanksgiving event are No. 5 Kansas, No. 11 Tennessee and No. 24 Dayton.

USC opens Pac-12 play at California on Nov. 30. Another noteworthy nonconference game is Dec. 18 when No. 15 Auburn visits Los Angeles.

The 235-pounder told CBS Sports he had suffered sudden cardiac arrest in July and was hospitalized briefly. A team spokesman said there is no timetable for Iwuchukwu, who attends every practice.

Iwuchukwu comes from Southern California Academy in nearby Castaic. He is USC's fourth five-star big man recruit in as many years.

Boogie Ellis emerged as a team leader last season when he averaged 12.5 points and 3.3 rebounds after transferring from Memphis. He joins fellow returning starter Drew Peterson to form a strong backcourt.

Peterson heads into his senior season poised to move from a supporting role to star player. He was second to Mobley in total points scored last season, led the Trojans in assists and had the second-most blocked shots. He shot 50% from the field and over 41% from 3-point range. At 6-10, Peterson bolsters USC's rebounding.

Reese Dixon-Waters came on strong in mid-February, scoring in double figures three times, including the NCAA Tournament. The 6-5 guard gives the Trojans perimeter size and he will contend for a spot in the starting lineup. Freshman guard Oziyah Sellers is a three-star prospect.

The Trojans' youth will be on display in a frontcourt filled with highly touted signees. While they wait on Iwuchukwu, four-star prospects Kijani Wright and Tre White have a chance to make immediate impact. The 6-9 Wright starred at nearby Sierra Canyon High as a senior, playing with Bronny James, son of Lakers star LeBron James. The 6-7 White comes from Prolific Prep in Napa, California, having averaged 18.2 points, 5.8 rebounds and 4.3 assists as a senior.

Lending experience is senior Joshua Morgan, a former Big West defensive player of the year at Long Beach State. The 6-11 forward returns to give the Trojans length on the interior.