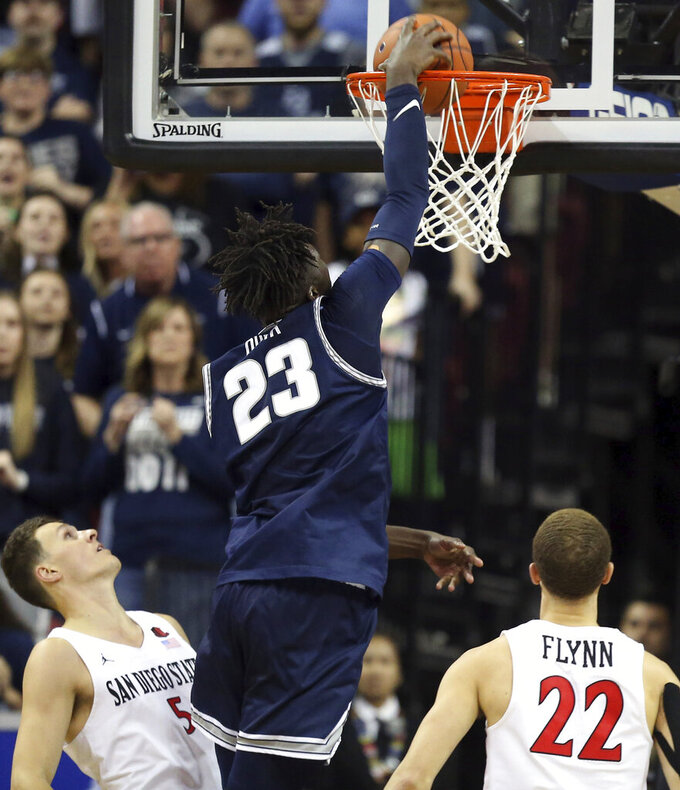 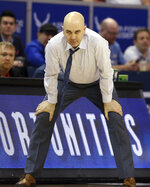 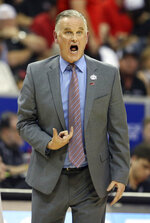 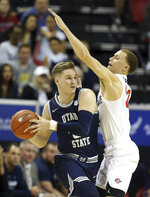 Merrill hit a contested 3-pointer with 2.5 seconds to play to give the Aggies a 59-56 victory over No. 5 San Diego State and clinch a spot in the NCAA Tournament for the second straight season on Saturday.

The Aztecs (30-2), who led by as many 16 points in the first half, had a chance to force overtime, but Malachi Flynn’s 3-point shot from just beyond half court rattled in and out at the buzzer.

The loss was San Diego State’s second in its last six games after starting the season 26-0. Meanwhile, Utah State, which entered Saturday’s game on the NCAA Tournament bubble, improved to 7-1 in its last eight games. The Aggies (26-8) are back in the Big Dance in consecutive seasons for the first time since a three-year run from 2009-11.

“I know that's easy for me to say being on the victorious side, but that was a whale of a basketball game between two highly competitive, very, very talented teams,” said Utah State coach Craig Smith. “It felt like one of those games where whoever is going to have the ball last is going to find a way to win, and then they almost throw in a half-courter. It was a heavyweight fight, and we knew it was going to go 15 rounds. Fortunately for us, we were the last man standing.”

Merrill has been shouldering the load for Utah State for most of the last two seasons, so it was hardly a surprise that Smith made sure the ball was in the hands of his senior guard in the waning moments.

After Flynn barely missed a 3-pointer from the wing with 25 seconds left that would’ve given San Diego State a 59-56 lead, Merrill secured the rebound and calmly dribbled up court. With Aztecs guard KJ Feagin playing tight defense, everyone inside the Thomas & Mack Center knew who would be launching the last-second shot.

With the clock ticking down and Feagin’s hand in his face, Merrill left his feet and hit the shot.

"I was just trying to get a good look,” Merrill said. “I barely slept last night, partially because the schedule is rough when you play that late-night game Friday night, and it’s a quick turnaround. I only got a few hours of sleep, but I was just hoping that I’d get that opportunity. And I had a vision that I was going to. I just threw it up there — well, I mean, I shot it — and it went in.”

Feagin said he did all he could do defensively.

“I felt like up until the release of the shot, I was right there on every move,” he said. “But props to him for making a good shot.”

Unlike in last year’s Mountain West Tournament title game, when San Diego State trailed most of the way and lost 64-57, the Aztecs were in total control throughout the first half Saturday. After falling behind 7-2 to start the game, they went on a pair of 11-0 spurts in building a 27-11 lead.

At one point, Utah State went nearly 13 minutes without a field goal, missing 10 straight shots and scoring just four points, all on free throws. Merrill finally snapped the drought when he made three consecutive baskets (including a 3-pointer) in a little over a minute to cut San Diego State’s lead to 27-18.

Flynn paced the Aztecs with 16 points, while Yanni Wetzell (12 points, 13 rebounds) recorded a double-double. Neemias Queta (15 points, eight rebounds) was the only player besides Merrill to score in double figures for the Aggies.

“This league has such a rich tradition in men's basketball, and to be able to repeat back to back … that’s a difficult, difficult thing to do,” Smith said. “And I couldn’t be more proud of these young men.”

Utah State dropped both regular-season meetings to San Diego State, losing 77-68 at home and 88-68 on the road.

Flynn and junior forward Matt Mitchell were dominant for the Aztecs in both games, combining for 84 points on 26-of-47 shooting (55.3 percent). However, this time around, both players struggled. Flynn missed 11 of his first 12 shots and finished 6-for-20, while Mitchell made just one of seven field goals, scoring just two points.

Not only did Utah State claim its second straight conference tournament title, but Merrill won tournament MVP honors for the second year in a row. Merrill finished the three games with 83 points (29-for-52 shooting), 13 rebounds and eight assists. He scored 27 points in the Aggies’ quarterfinal victory over New Mexico and 29 in the semifinals against Wyoming before tallying 27 against San Diego State.

Flynn and Feagin joined Merrill on the All-Tournament Team, along with Queta and Wyoming’s Kwane Marble II.