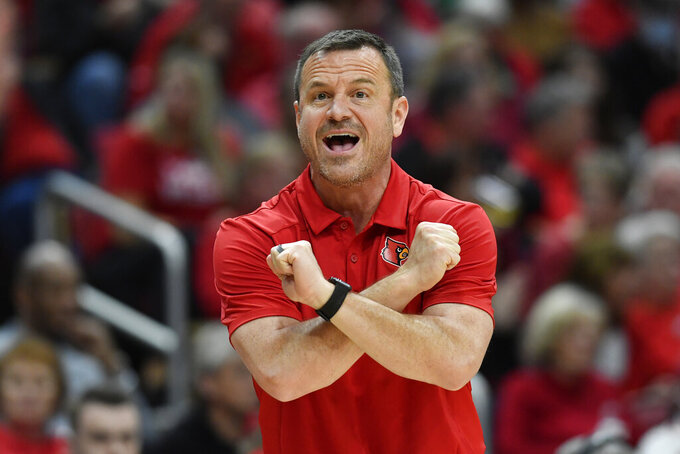 Louisville head coach Jeff Walz signals a play in to his team during the first half of their women's NCAA Tournament college basketball first round game against Albany in Louisville, Ky., Friday, March 18, 2022. (AP Photo/Timothy D. Easley)

LOUISVILLE, Ky. (AP) — Hailey Van Lith scored 17 of her 20 points in the first half and top-seeded Louisville never looked back as the Cardinals routed Albany 83-51 in a first round women’s NCAA Tournament game Friday.

It was Louisville’s first game since dropping a 61-59 heartbreaker to Miami in the quarterfinals of the ACC Tournament two weeks ago. The Cardinals led 59-44 with 5:44 left before the Hurricanes rallied.

“The feeling that we felt in the ACC Tournament, we decided after that game that we’re never going to feel that again,” Van Lith said. “We had a great week, two weeks of practice, but at some point you got to let that game go. And I think we let it go.”

Louisville shot 52.4%, with Kianna Smith adding 15 points – all in the first half. Defensively, the Cardinals forced Albany into tying a season high with 26 turnovers.

Those miscues turned into 37 Louisville points, 24 of those came off the 17 turnovers in the first half.

Coach Jeff Walz said his team needed to use that pressure to build a big lead early on a team he described as the best 16-seed he’d ever faced.

“We knew we had to come out and try to cause as much havoc as we could,” Walz said. “Because if you allow them to run their stuff, they’re really good at it.”

The Cardinals will face Gonzaga in a second-round matchup Sunday. Louisville has advanced to the Sweet 16 in every NCAA Tournament since 2017 and in 10 of the last 12 tourneys.

Moments before the tip, new Louisville men’s basketball coach Kenny Payne received a loud standing ovation as he made his way to his seats a couple rows behind the Cardinals bench.

That wasn’t the only news for Louisville on Friday. The school also announced an extension for women’s coach Jeff Walz that will carry through to the 2028-29 season.

Currently in his 15th season, Walz is the program’s all-time winningest coach with a record of 411-112.

Albany: The Great Danes came in at less than 100%. Lucia Decortes, one of two seniors on the squad, missed her second straight game due to a leg injury. The 6-3 forward was the tallest player on the team, and without her presence, Louisville enjoyed a 44-24 scoring advantage inside the paint.

Both seniors, Hahne is the other, are expected to return next season, though, and Colleen Mullen’s team posted their first winning season since the 2017-18 season. That and cutting down the net in the America East Tournament gives Mullen hope they can build on this for next year.

“To win our conference tournament was really cool, a really great experience,” she said. “So, I think to just get here is the victory and regardless of the outcome, they were going to be winners in my eyes.”

Louisville: Determined to move past their failure to closeout against Miami in the ACC tournament quarterfinal, the Cardinals never let up on Friday. The second-half lead never dropped below 25 points. However, a more physical team awaits in Gonzaga, a squad that could cause problems for Louisville.