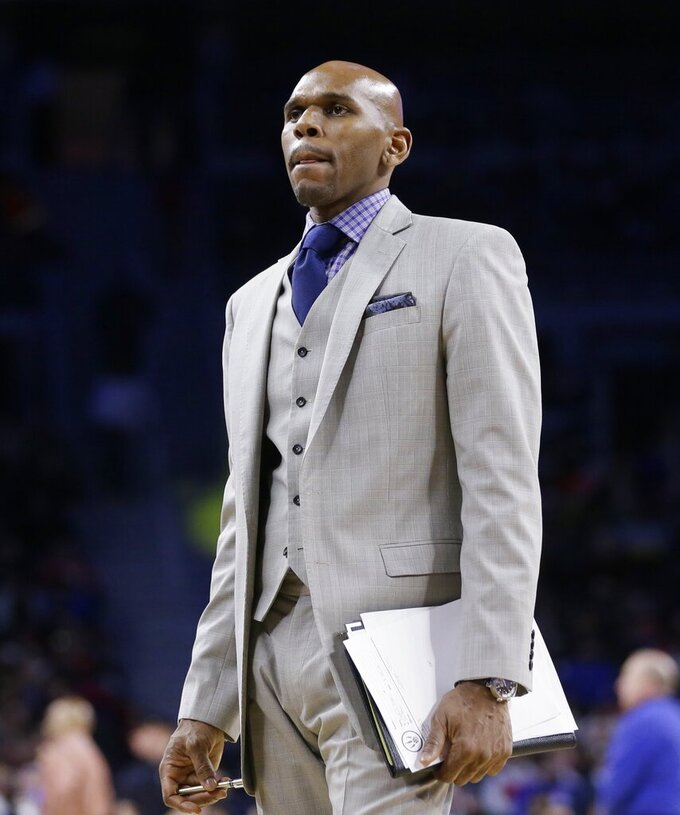 FILE - In this Feb. 28, 2016, file photo, Toronto Raptors assistant coach Jerry Stackhouse is seen during the second half of an NBA basketball game against the Detroit Pistons, in Auburn Hills, Mich. A person familiar with the situation says Vanderbilt has hired Memphis Grizzlies assistant and former NBA All-Star Jerry Stackhouse as its basketball coach. The person spoke on the condition of anonymity Friday, April 5, 2019, because Vanderbilt has not commented on its coaching search.(AP Photo/Carlos Osorio, File)

Athletic director Malcolm Turner announced the hiring Friday. Stackhouse will need to revive a program that just went through its worst season ever at 9-23. The Commodores finished on a 20-game skid and became the first Southeastern Conference team to go winless in league play in 65 years. And the top-rated players already have left early for the NBA.

Stackhouse will be introduced at a news conference Monday, and Turner said in a statement that the future is bright for the Commodores with their new coach.

"Jerry brings a unique mix of experience as a legendary player and successful coach, and I fully expect he'll take the program to new heights," Turner said. "I've spoken with people inside and outside both college and professional basketball, and there is unanimous agreement that Jerry's competitiveness, grit and tireless focus on player development are a perfect fit to advance the 'Vanderbilt Way' in college athletics."

Stackhouse succeeds Bryce Drew, who was fired March 22 after he went 40-59 in three seasons. He takes over a program that plays in the SEC's oldest basketball arena at Memorial Gym, and the Commodores' history includes three Southeastern Conference regular-season titles, two conference tournament titles — the last in 2012 — and 15 NCAA Tournament appearances.

Stackhouse said he's looking forward to building on the program's history and thanked Turner and Vanderbilt Chancellor Nicholas Zeppos for giving him this opportunity.

"I look forward to furthering Vanderbilt's unique approach to athletics — blending a powerhouse competitive spirit with elite academics to holistically develop talented student-athletes and celebrate victories on and off the court," Stackhouse said in a statement.

Stackhouse, an 18-year NBA veteran and two-time All-Star, was considered in NBA coaching searches last year by Toronto, New York, Charlotte and Orlando after his success coaching the Raptors' NBA G League team. Stackhouse was an assistant with Toronto during the 2015-16 season.

Then he went 70-30 in two seasons with the Raptors 905, reaching the finals twice and winning a championship. He was the league's coach of the year for 2016-17 when Turner was president of the G League.

Memphis coach J.B. Bickerstaff said Friday before the Grizzlies' game in Memphis that nobody is more deserving than Stackhouse.

"Just watching the work that he's put in, the ability that he has to teach the game," Bickerstaff said. "I think Vanderbilt is going to be fortunate for having him. The guys that he's coaching, to be able to develop them the way that he's capable of, I think they did a great job on that hire."

Mavericks coach Rick Carlisle had Stackhouse in the coach's first season in Detroit in 2001-02 and then in Dallas in 2008-09, and he called this an amazing opportunity. Carlisle said Stackhouse has paid his dues as a coach, overseeing the G League team for the experience as a head coach.

"A lot of guys wouldn't want to do that," Carlisle said. "That showed real humility and respect for the game. I figured that Stack would be an NBA coach at some point. So his decision to go to college is probably a little bit surprising to some. Vanderbilt's an amazing school. He's got an iron will. I'm sure he'll turn it around there."

The Commodores last reached the NCAA Tournament in 2017 in Drew's first season after being hired in April 2016 to replace Kevin Stallings. Drew's worst season came after signing the highest-rated recruiting class ever at Vanderbilt. Five-star point guard Darius Garland hurt his knee Nov. 23 in a home loss to Kent State and later withdrew to prepare for the NBA draft.

Simisola Shittu, Drew's other five-star recruit, announced Wednesday that he was entering the NBA draft also. Shittu was rated as the nation's No. 11 player in his high school class, according to composite rankings of recruiting sites compiled by 247Sports.

Stackhouse left North Carolina after the 1995 Final Four and was the third overall pick in the NBA draft that year. He went back to North Carolina and graduated in 1999. He also finished an executive education program at Harvard Business School in 2017.

He also founded his own AAU program, Stackhouse Elite, in 2011. The program based in Atlanta has won a handful of titles in the 15-under, 16-under and 17-under divisions.