Vanderbilt trying to snap 7-game skid with Kentucky next 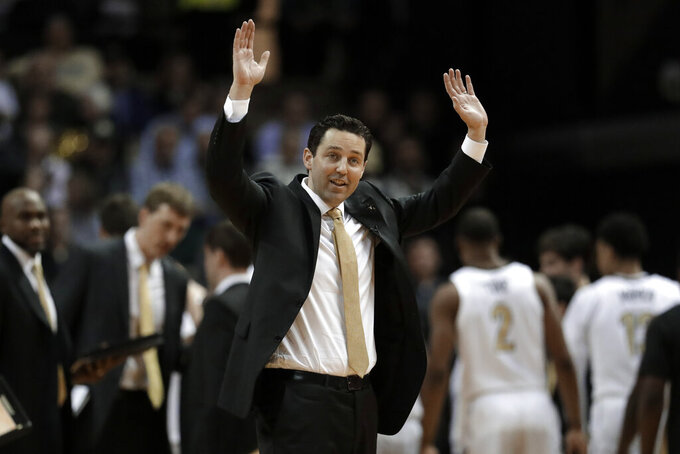 FILE - In this Jan. 23, 2019, file photo, Vanderbilt head coach Bryce Drew reacts to an official's call in the second half of an NCAA college basketball game against Tennessee in Nashville, Tenn. Vanderbilt's worst start ever in the Southeastern Conference could get much uglier. The Commodores host Kentucky on Tuesday, Jan. 29, 2019, having lost six straight league games and seven overall after a blowout loss to Oklahoma in the Big 12/SEC Challenge. (AP Photo/Mark Humphrey, File)

They have lost the first six games to start their SEC schedule, and the skid reached seven straight last weekend with an 86-55 loss at Oklahoma in the SEC/Big 12 Challenge. That matched a seven-game skid in January 2015 under former coach Kevin Stallings.

And it could get worse Tuesday night when the Commodores host No. 7 Kentucky as their third ranked opponent in four games.

It's the first such skid for coach Bryce Drew, who is in his third season at Vanderbilt and eighth overall.

"I don't think that losing defines us right now," Drew said. "It's how we respond to this losing streak we're having, and we're pushing through. Guys are working. We're seeing improvement. We're seeing character growth. Again, you have to go through these times to get to good times. You don't want to, but these are going to help us get to those good times in the future."

Being young helps. The Commodores (9-10) rank 305th nationally in experience, according to www.KenPom.com , and two of their top three leading scorers are freshmen. The other is sophomore Saben Lee.

Before this season, Vanderbilt had never lost more than twice to open the SEC slate of the season. But the Commodores lost freshman point guard Darius Garland to a season-ending knee injury in late November, and Drew has a team with only one senior, Joe Toye, and a pair of juniors playing their first seasons in the league after transferring.

Drew has been starting freshman Aaron Nesmith and Simisola Shittu along with Lee, who has had to replace Garland running the offense.

Kentucky associate coach Kenny Payne said Monday the Commodores have had unfortunate timing, too, but are still playing hard.

They have been busy practicing all the issues that have popped up this season, from handling calls that go against them late in games like the flagrant foul that allowed No. 1 Tennessee to rally late in regulation before winning in overtime, to turnovers that popped up in the Oklahoma loss and free throws.

Drew said his Commodores are getting more used to being in different spots than anticipated if Garland had stayed healthy. No team in the SEC has more than Vanderbilt's 480 attempts at the free-throw line, yet the Commodores are shooting just 69 percent at the line.

Shittu said the Commodores are much closer to figuring themselves out and how to finish off a win. Nesmith said desperation is starting to kick in with the Commodores knowing they have to win a game.

"Once we get that first win down, it's going to start coming," Nesmith said. "Just got to remember how to do it again."