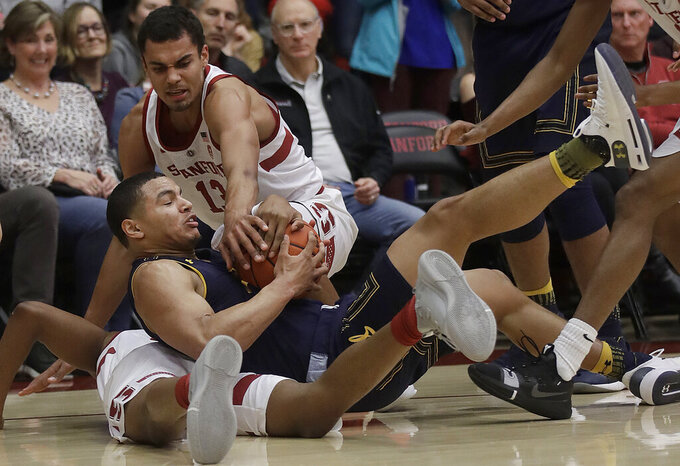 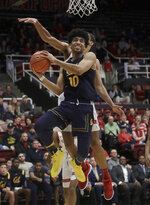 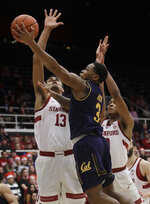 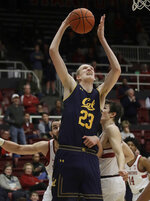 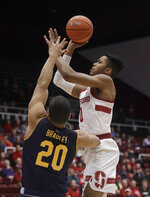 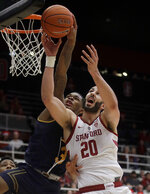 STANFORD, Calif. (AP) — Connor Vanover helped California get off to a fast start with his best shooting night of the season. The 7-foot-3 freshman's defense was just as important in keeping the Golden Bears rolling.

Vanover scored a season-high 24 points and made a critical 3-point play with 56.7 seconds remaining, and California held on to beat Stanford 64-59 on Thursday night.

Vanover shot 9 of 12 and had season-highs with five 3-pointers and six blocked shots to go with five rebounds, helping the Golden Bears (8-22, 3-15 Pac-12) close the regular season with their third straight win following a school-record 16-game losing streak.

"He had an unbelievable shooting night tonight," Cal coach Wyking Jones said. "But what's most impressive for me on the stat sheet was he had six blocks. He did a great job protecting the middle for us."

Vanover hadn't made more than two 3s in a game but made his first four against Stanford and finished 5 of 6 beyond the arc. His lone missed 3 came in the second half when he shot an airball with the shot clock running down.

Stanford coach Jerod Haase said Vanover's quick start put the Cardinal in too big a hole to come out of.

"He set the tone for the entire game early," Haase said. "I do think we could have challenged a few shots early better . then after he made one or two, the confidence skyrocketed."

Vanover scored Cal's first 12 points and matched his season high with 18 points before halftime. The whip-thin center made another 3-pointer early in the second half then kept Stanford's interior offense from getting established in the paint.

"I like defense even a little bit more than offense," Vanover said. "Getting clean blocks and getting rebounds, that's what really fuels me. Once I get those, I can come down to the other end and make some plays."

Paris Austin added 15 points for Cal. Matt Bradley had 14 points and seven rebounds before fouling out, while Justice Sueing had nine points and 10 rebounds.

"Just not locked in," Okpala said. "That's the biggest thing, we weren't locked in at the beginning and we got down big."

Cal led 45-24 following Vanover's fifth 3-pointer of the game early in the second half but struggled to put Stanford away despite a strong night from Bradley.

Bradley had 11 points in the second half including a pair of free throws to put the Bears up 58-45. He fouled out 40 seconds later when Stanford made its best run.

The Cardinal made three 3-pointers, two by Cormac Ryan, to cut Cal's lead to 58-55. After Vanover's 3-point play, Sharma scored on a dunk and Grant Anticevich and Sueing added free throws.

Stanford trailed by 19 in the first half but chipped away at the lead and pulled within 34-24 on Okpala's soaring one-handed dunk before Bradley banked in a long 3-pointer at the buzzer.

"It was a momentum play for us," Jones said. "Very important just for the pysche of both teams."

California: With three straight wins, the Bears are tied with Oregon as the hottest team in the Pac-12. That might not do much in terms of their overall record but it does build some momentum heading into the conference tournament. The 21-point lead was Cal's largest in any game this season.

Stanford: The Cardinal were missing Daejon Davis (foot) for a second game and struggled to find another consistent scorer to complement Okpala. Stanford's big run at the end made it close but it wasn't enough. Now it's on to the conference tournament.

California: Despite their late surge, the Bears face an uphill climb in the Pac-12 Tournament in Las Vegas. They will play the No. 5 seed, which has yet to be determined, in the first round on Wednesday.

Stanford: The Cardinal will have to wait a few days before learning who it will play in the Pac-12 Tournament's opening round Wednesday. Stanford is slated to face the No. 7 seed and there is a logjam of teams still jockeying for position.