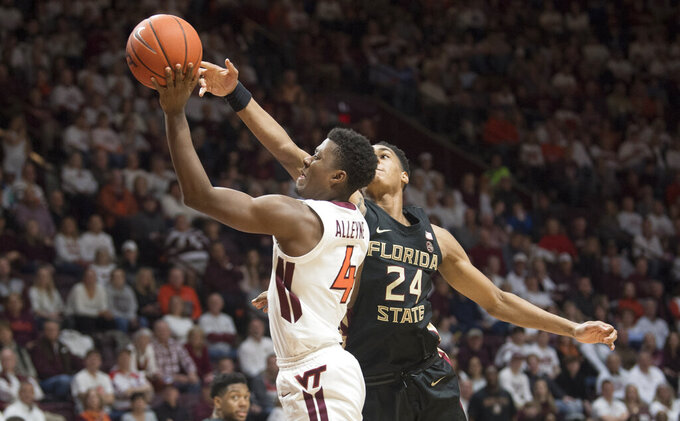 BLACKSBURG, Va. (AP) — Devin Vassell was too ramped up trying to help No. 5 Florida State beat Virginia Tech to realize he was earning himself a place in the ACC record book.

“Not at all,” Vassell said. “Coming to the bench, people just said, ‘Just keep shooting if you’re open. You’re hot, you’re hot.’ My teammates kept finding me, and we kept running plays that were getting me open. Give credit to the coaches, and I’m just thankful for that.”

He may not have been aware, but everyone else knew he was in the midst of a special afternoon.

Vassell tied an ACC mark by shooting 7 for 7 from 3-point range and scored 27 points to lift the No. 5 Seminoles to a 74-63 victory over the Hokies on Saturday.

Vassell and the Seminoles (18-3, 8-2) rebounded from Tuesday night’s loss at Virginia that snapped a 10-game winning streak. Florida State remained a game out of first place in the ACC standings.

The Seminoles led for much of the first half, were ahead 34-29 at the break and held the lead the rest of the way. Florida State grabbed a 60-44 advantage on a free throw by Trent Forrest with 9:25 remaining before the Hokies scored the next nine points. They cut the lead to 60-53 on a dunk by Nahiem Alleyne with 6:23 left, but got no closer.

“I’m not going to make excuses,” Virginia Tech coach Mike Young said. “You’ve got to find ways to win. We are in a bit of a hole here, but as I told them after the game, we control everything … Play better basketball. Find ways to win. Come back over here tomorrow and fight again. Get to Georgia Tech and play a little bit better.”

Vassell connected on his first six shots from the floor -- five 3-pointers -- and made 8 of 10 for the game. He was the lone Florida State player in double figures, but 10 different Seminoles scored and seven scored at least seven points.

“We had a lot of guys contribute a little bit,” Florida State coach Leonard Hamilton said. “That’s kind of who we are. We win games by committee. I thought that really made a difference. We had everyone basically contributing in some kind of way, and Devin just happened to be our lead dog tonight. It’s been that way all year. It always seems to be somebody else stepping up. That’s who we are as a team.”

Florida State: The Seminoles have all the traits needed to make a deep NCAA Tournament run. They feature a deep roster, have forced more turnovers than any team in the ACC, and possess on underrated star in Vassell, who has scored in double figures in eight consecutive games. He is averaging 17.6 points per game in that span.

Virginia Tech: When the Hokies don’t hit 3-pointers, they struggle, and that happened again Saturday. Virginia Tech made just 7 of 30 from beyond the arc against the Seminoles. In their three-game losing streak, the Hokies are shooting just 30.1% (22 of 73) from 3-point range.

“He was extremely productive,” Hamilton said of Vassell. “But I thought his energy was infectious, and I thought it motivated and ignited the rest of our players as well.”

Florida State: The Seminoles play at home against North Carolina on Monday.

Virginia Tech: The Hokies take on Georgia Tech in Atlanta on Tuesday.