Vermont's Lamb among players to watch from 1-bid conferences 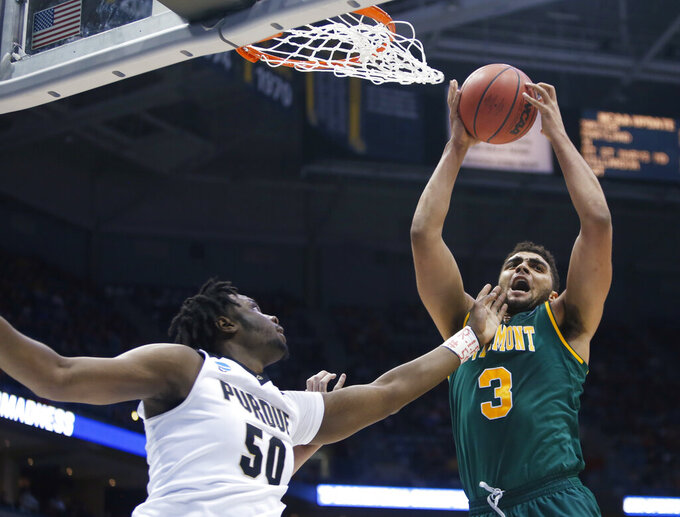 FILE- In this March 16, 2017, file photo Vermont's Anthony Lamb grabs a rebound in front of Purdue's Caleb Swanigan during the first half of an NCAA college basketball tournament first round game in Milwaukee. (AP Photo/Kiichiro Sato, File)

Vermont's Anthony Lamb is among several players from one-bid conferences capable of leading their teams to major upsets in the NCAA Tournament.

The 6-foot-6 junior forward scored 24 points against Kansas and 25 points against Louisville in the NIT Season Tip Off in November. Although Vermont lost both games, Lamb surely has Florida State's attention.

"I don't really associate the names with the schools," Lamb said. "I think no matter who you are, you have to prove your worth on the court every time you step onto it. I'm just looking forward to going out there and testing my weight versus them and making sure they have to prove themselves to me."

Other notable performers on NCAA Tournament teams from one-bid leagues include Wofford's Fletcher Magee and Buffalo's CJ Massinburg. Murray State guard and likely NBA lottery pick Ja Morant will likely have one or two highlight-reel moments but isn't on this list because the Ohio Valley Conference became a multiple-bid league for the first time since 1987 with both Murray State and Belmont making the field.

Lamb has been on this stage before with Vermont.

As a freshman, he scored 20 points and pulled down nine rebounds in an 80-70 NCAA Tournament first-round loss to Purdue.

"I learned that the moment's really not as big as you think it is," Lamb said. "You can really overwhelm yourself if you put too much weight on it. Just having fun and just playing basketball like it's supposed to be played, enjoy the game and enjoy the sport is the purpose of it. Just taking that in hand and bringing that forth with me into competition really allows me to stay relaxed, stay confident and just play basketball how I know I can."

Lamb's come a long way in the two years since that Purdue game.

He leads the America East Conference in scoring (21.4) and ranks second in rebounding (7.8), making him the clear choice as the league's player of the year. Lamb has thrived because of a work ethic he says he inherited from his mother.

"I've seen my mom work hard all her life to try to put stuff on the table for me," Lamb said. "I think it's just really in my blood, I think working hard is important in whatever you do. I feel like because I love playing basketball so much, I'm willing to work hard for it."

A look at some of the players from one-bid leagues worth keeping an eye on:

Most of the people on this list are here because of their scoring ability. Galloway's included because of his defense. The 6-10 fifth-year senior averages only 7 points a game, but he's a three-time Big West Conference defensive player of the year who broke UC Irvine's 44-year-old school record for career rebounds.

Colgate won its first Patriot League title in 23 years thanks in part to Ivanauskas, the league's player of the year. Ivanauskas began his college career at Northwestern but struggled with injuries in two seasons before transferring. The 6-10 junior is healthy this year and averaging 16.4 points and 7.9 rebounds.

Magee will likely become the most prolific 3-point shooter in NCAA Division I history at this tournament. The Southern Conference player of the year has made 502 career 3-pointers and is only two behind Division I record-holder Travis Bader, who made 504 for Oakland from 2010-14. Magee leads all Division I players with 151 3-point baskets this season.

Massinburg is a two-time first-team all-Mid-American Conference selection and the reigning MAC player of the year. He averages 18.3 points, 6.6 rebounds and 3.3 assists. The 6-3 senior had a 43-point outburst in a victory over West Virginia and a 25-point performance in a win at Syracuse.

McDonald is a three-time, first-team all-Horizon League performer who was named the league's player of the year this season. The 6-8 senior leads the Horizon League in rebounding (9.6) and ranks second in scoring (19.1). His 3-pointer with 1.3 seconds left gave Northern Kentucky a 64-63 victory over Oakland in the Horizon League semifinals.

McGill is the first player in Metro Atlantic Athletic Conference history to play on four conference tournament championship teams. He was named the most valuable player of this year's MAAC Tournament. The 6-2 senior averages 15.5 points and 5 assists.

Oni is the Ivy League's player of the year and ranks third in the league in scoring (17.6), third in assists (3.5) and tied for eighth in rebounding (6.4). The 6-6 junior scored 29 points in a victory over Miami. He had 12 points, nine rebounds and five assists in a loss to Duke.

This fifth-year senior from Serbia scored 20 points in an early-season upset of Alabama. Pusica scored 21 points and shot 7 of 12 from 3-point range as Northeastern surprised Hofstra in the Colonial Athletic Association championship game. The San Diego transfer averages 17.8 points and 4.2 assists.

Simonds is back on this stage after scoring 24 points in an NCAA Tournament loss to Cincinnati last season. The 6-3 junior was named Sun Belt player of the year last season and earned first-team all-conference honors again this year. He averages 18.4 points.

Stith is the son of Bryant Stith, a former NBA player who remains Virginia's all-time leading scorer. Stith started his college career at Virginia before transferring to Old Dominion, where his dad's an assistant coach. The 6-5 senior is the Conference USA player of the year and averages 16.9 points and 7.4 rebounds.