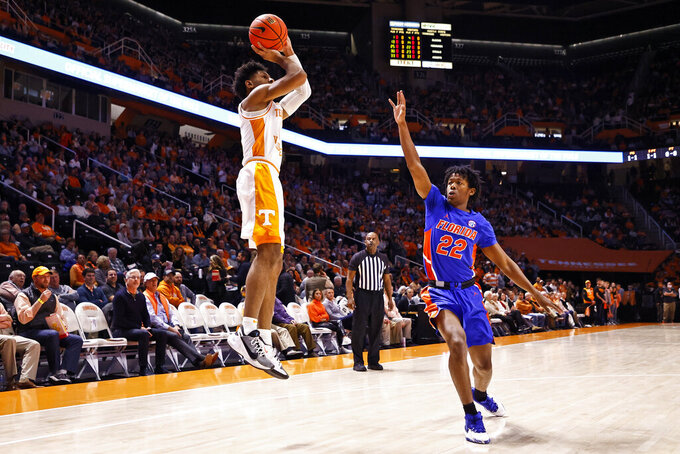 KNOXVILLE, Tenn. (AP) — After 35 years in the coaching business, Tennessee's Rick Barnes has just about seen it all.

But when the 18th-ranked Volunteers went through a five-minute stretch in the first half in which they didn't attempt a shot and committed seven turnovers — and still beat Florida, 78-71 — it left Barnes shaking his head.

Santiago Vescovi scored 23 points, hitting 5 of 8 3-pointers, and Tennessee trailed by as many as 13 points in the first half before rallying to beat Florida. The Vols (14-5, 5-3 Southeastern Conference) committed 12 first-half turnovers but had only four in the second half.

“Sometimes we can get sloppy,” said Vescovi. “Other teams give us more pressure.”

Florida (12-8, 3-5) scored 15 straight points in that first-half burst, including all eight of Brandon McKissick's points.

Zakai Zeigler came off the bench for Tennessee to hit a pair of 3-pointers and block a shot as the Vols got back into the game.

“Florida came out hard and punched us,” said Zeigler, who finished with 11 points. “I just had to bring some energy. That's what my teammates expect.”

Late in the first half, Florida big man Jason Jitoboh went down after being hit in the face. He did not return. Gators coach Mike White said that changed his team's approach.

“We weren't able to take advantage of anything on the interior,” White said. The Gators were already missing big man Colin Castleton, who was out with a shoulder injury.

“We were just throwing anything out there in the second half,” White said.

Anthony Duruji was the only inside presence for Florida. He and Tyree Appleby scored 16 points apiece. Phlandrous Fleming Jr., scored 11 and Myreon Jones added 10.

“We fought hard and stayed together,” Duruji said. “We tried to fight through some adversity.”

With about a minute left and Tennessee leading 70-66, Vescovi and Duruji went after a missed shot by the Vols. Vescovi ended up out of bounds when the whistle blew. The officials debated before calling a hook-and-hold foul on Duruji. Vescovi made two free throws, and Tennessee got the ball.

“I'm not going to talk about that,” White said.

After the game, while the teams were shaking hands, Appleby and some Vols got in a yelling match.

“There's always chirping in the game,” Barnes said. “I understand being competitive. We're going to have a class program. Sometimes you just have to move on.”

Florida: The Gators played at Ole Miss on Monday to make up a game postponed by COVID-19. Wednesday's game was their third in five days in three cities. Florida has been without Castleton, its leading scorer at 15.4 points per game, during the grueling stretch. The 6-foot-11 player suffered a shoulder injury in practice on Jan. 18.

Tennessee: The Vols are unbeaten in 11 games at home this season and have a 12-game winning streak dating back to last season. ... Tennessee is averaging 16,789 in attendance, fifth in the country. ... Chandler's 2.29 steals per game ranks second among true freshmen nationally, and he's third among freshmen in assists at 4.9 per game. ... Tennessee athletic director Danny White is the younger brother of Florida's coach.

Tennessee: At Texas on Saturday. Barnes won 402 games in 17 seasons with the Longhorns.