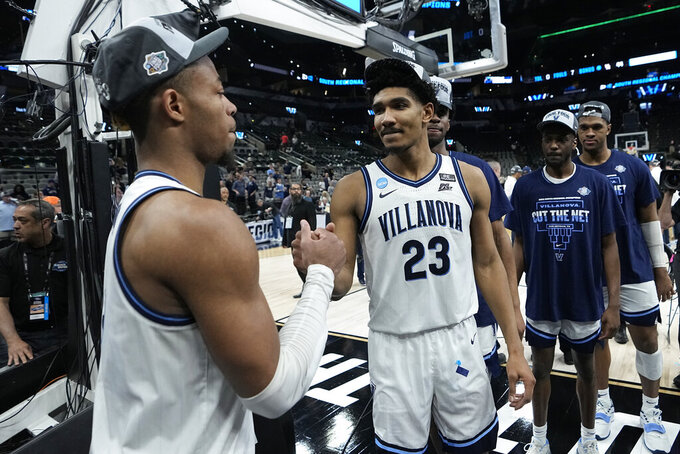 Villanova forward Jermaine Samuels leaves the court with guard Justin Moore after their win against Houston during a college basketball game in the Elite Eight round of the NCAA tournament on Saturday, March 26, 2022, in San Antonio. (AP Photo/David J. Phillip)

VILLANOVA, Pa. (AP) — Villanova guard and second-leading scorer Justin Moore will undergo surgery this week for a torn Achilles tendon, a brutal blow for the Wildcats ahead of their Final Four game with Kansas.

Moore was a second-team All-Big East selection this season. The 6-foot-4 guard averaged 34.4 minutes, 14.8 points and 4.8 rebounds per outing in 36 games.

Moore was injured in the final minute of Villanova's regional final victory win over Houston on Saturday night and was on crutches during the Wildcats’ postgame celebration. He was dribbling against a defender and appeared to slip and fall. Moore then went back down after trying to get up.

The Wildcats are playing for their third national championship since 2016.

“This is a tough blow for all of us, not just because of the great player Justin is, but because of what he means to us as teammates and coaches,” Villanova coach Jay Wright said in a statement Sunday. “As one of our captains, Justin has been an integral part of our success. He helps our team in so many ways. Every game, he guards the opponent’s best scorer and is one of the toughest rebounding guards we have had in our time at Villanova.”