Virginia Tech goes on second half run to defeat Syracuse 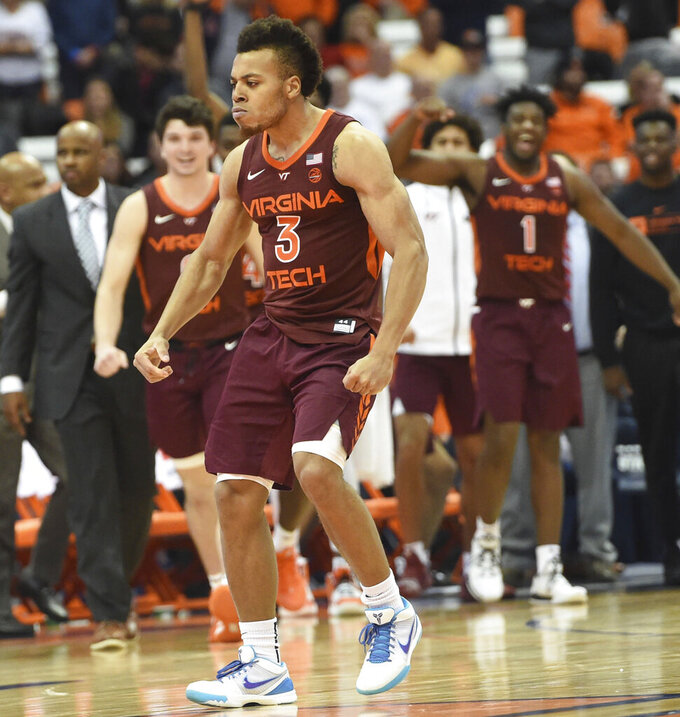 SYRACUSE, NY (AP) — Virginia Tech coach Mike Young said he had to “have a kid on the floor who could rise up” in order to beat Syracuse.

That kid turned out to be freshman Jalen Cone, who scored a career-high 19 points, including 16 in the second half, and Virginia Tech went on a 21-4 run midway through the second half to defeat Syracuse 67-63 on Tuesday night for its first win in seven tries in the Carrier Dome.

Cone, who averaged 5.6 points entering the game, hit four of his five 3s in the second half, including two on eventual 4-point plays, when the Hokies took control.

“I knew that Cone, if we were going to win, was going to have to get a couple of shots down,” Young said. "I don’t know if I expected him to get five of them down from long range but that’s what he does.

“He (Cone) made shots,” Syracuse coach Jim Boeheim said. “We knew he was a good shooter, one of their best shooters.”

Cone scored on a 4-point play, P.J. Horne hit a baseline jumper and Cone hit another 3 to close the gap to 42-40 with under 11 minutes to go. A slam by Landers Nolley tied the game at 42. The Orange took a brief lead on two foul shots by Joe Girard, but a corner 3 and foul shot by Cone, his second four-point play in two minutes, gave the Hokies a 46-44 lead and Virginia Tech led the rest of the way. Cone hit another 3 with 6:42 to go to give the Hokies a 60-54 margin.

“I just waited my turn and stayed patient, so when coach threw me in there I knew exactly what he wanted,” Cone said. “I always prepare for moments like these, so it was just time to step up. He told me if I feel comfortable with a shot just take it. I've been working on shots beyond the NBA range and way behind that.”

Quincy Guerrier scored on a putback with 23.9 to go to make it 64-61 but missed a foul shot. Two foul shots by Nolley made it 66-61. A dunk by Guerrier brought the Orange to 66-63. Nolley added one more free throw to cap the scoring.

“This is really frustrating but we have to lock in and get ready for Saturday (at Virginia),” Hughes said. “We had stretches where we were playing really good defense. We just have to finish.”

Hughes led the Orange with 18 points. Girard and Guerrier each scored 12 and Buddy Boeheim added 10.

The loss marked the third straight home conference loss for Syracuse, the first time that's happened since the 1996-97 season when the Orange failed to qualify for the NCAA Tournament.

Young was especially pleased with how his team responded after a 65-39 loss at Virginia on Saturday.

“They (Virginia) flattened our nose on Saturday. "The resolve and the toughness and the grit and all the things you look for out of a team, we displayed that.”

Virginia Tech: The Hokies showed great resolve and demonstrated they can win without shooting lights out from 3.

Syracuse: The Orange is in deep trouble and faces the real prospect of its first losing season under coach Jim Boeheim.

The Hokies had an incredible 20 assists on 21 made baskets.

Virginia Tech returns home for a matchup against North Carolina State on Saturday.

The Orange have a tough rematch at Virginia on Saturday. The Cavaliers held the Orange to 34 points in the season opener for both teams on Nov. 6.