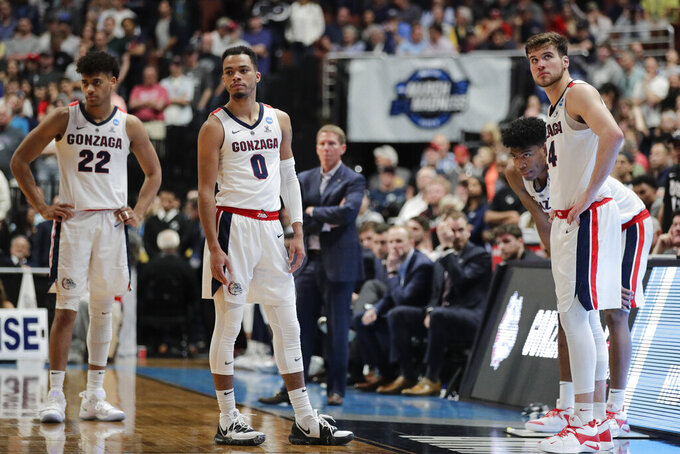 Texas Tech shut down the nation's most efficient offense to reach its first Final Four in 93 years as a program.

Virginia erased the bitter taste of last year's historic NCAA Tournament flop by surviving Carsen Edwards' offensive onslaught to earn a spot in the national semifinals for the first time 1984.

No doubt, there's going to be a different feel next weekend in Minneapolis.

"Growing up my whole life watching these press conferences and the guy that always gets there and says 'undescribable,'" Texas Tech coach Chris Beard said. "And I'm like, 'Oh, give us something better than that.' But I don't have anything better. It's undescribable."

Virginia coach Tony Bennett knows the feeling. He also knows what it's like to be on the wrong side of history.

A year ago, Virginia became the first No. 1 seed to lose to a No. 16 when UMBC took down the Cavaliers in the first round.

The historic loss added a layer to arguments about whether Bennett can get it done under the brightest lights.

Bennett started building Virginia after being hired in 2009, gradually turning the program into one of the nation's best.

The Cavaliers won at least 22 games every year since 2012 and reached the NCAA Tournament each of the past six years. Virginia had a shot at the Final Four in 2016, but was knocked off by Syracuse in the Elite Eight.

The Cavaliers reached the Sweet 16 one other time and had the epic fail last year.

Virginia appeared to be in trouble Saturday night, when Edwards couldn't seem to miss, hitting 10 3-pointers while scoring 42 points.

But the Cavaliers tied it in regulation on Mamadi Diakite's buzzer-beating jumper after Kyle Guy purposely missed a free throw. Virginia held off the Boilermakers in overtime for the 80-75 win.

Now, finally, they're headed to the Final Four.

"No one knows what this team has been through," Bennett said. "I do and it's good."

So is what Beard has done.

Pre-Chris Beard Texas Tech occasionally popped up on the relevancy radar before falling back to the middle of the pack.

Pre-Texas Tech Chris Beard made a steady rise through the coaching ranks before one monumental victory made him the hot-ticket coach everyone seemed to want.

Beard coached everywhere from junior college to the ABA to Division II McMurry University after serving as a student assistant under Tom Penders at Texas.

Beard's breakthrough moment came during the 2016 NCAA Tournament, when his 13th-seeded Arkansas-Little Rock Trojans rallied from a 14-point deficit in the final five minutes to beat fifth-seeded Purdue in double overtime.

Little Rock's Cinderella run had Beard's phone ringing. One call he took was to accept the head job at UNLV.

Less than a month later, he was in Lubbock after leaving the Runnin' Rebels to coach Texas Tech, where he spent seven seasons as an assistant coach.

It worked out well for him and the Red Raiders.

After an 18-14 inaugural season, Texas Tech won 27 games and reached the Elite Eight for the first time last season.

The Red Raiders won a share of the Big 12 regular-season title to end Kansas' 14-year reign this season and shut down four straight NCAA Tournament opponents to reach the Final Four for the first time.

Not bad for a bunch of non-five-star players.

"It's like when I go to Grandy's," Beard said. "Do I want double mashed potatoes or mashed potatoes and corn? I want both. So we would love to have All-Americans and turn 'em into grinders."

The quick-handed Red Raiders play defense like pickpockets on a crowded subway train, often snatching the ball before the dribbler knows it's gone.

"It's real. That defense is real," Gonzaga coach Mark Few said. "And Chris has done a great job with it and it definitely impacted us tonight."

Virginia and Texas Tech's breakthroughs will certainly have an impact on the Final Four next week, regardless of which two teams join them.