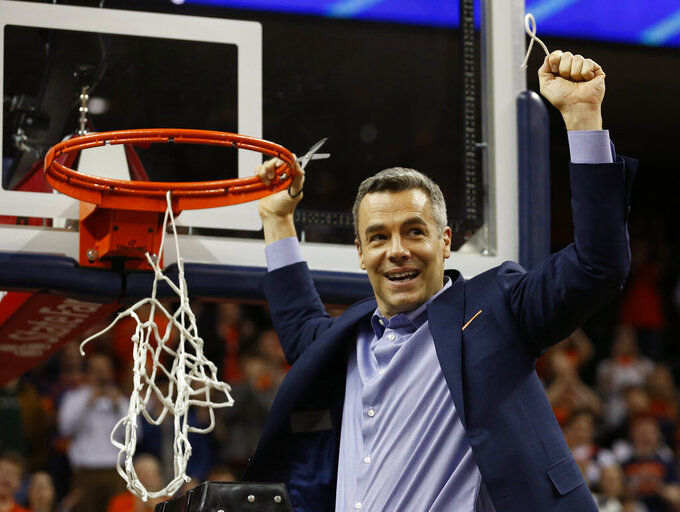 Virginia head coach Tony Bennett holds a piece of the net after a victory over Louisville after an NCAA college basketball game in Charlottesville, Va., Saturday, March 9, 2019. (AP Photo/Steve Helber) 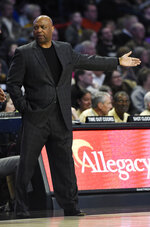 RALEIGH, N.C. (AP) — This week's Atlantic Coast Conference Tournament is all about the league's heavyweights.

Second-ranked Virginia and third-ranked North Carolina arrive after sharing the regular-season championship and in pursuit of possible No. 1 seeds for the NCAA Tournament. And then there's fifth-ranked Duke, hoping to get freshman star Zion Williamson back from a knee injury and prove the Blue Devils are again the team that spent a national-best seven weeks atop the AP Top 25 this season.

The five-day tournament begins Tuesday in Charlotte, marking its return to the state of North Carolina after a three-year absence — the longest stretch in the event's 65-year history.

The Cavaliers (28-2, 16-2) are the reigning champion, continuing a sustained run near the top that started in their breakout year under Tony Bennett in 2014. They earned the No. 1 seed by beating the Tar Heels in their only matchup.

Virginia swept the regular-season and tournament titles for the second time under Bennett last season, and suffered its only two losses to the Blue Devils.

"We knew it was going to be a new team," guard Ty Jerome said after Saturday's home win against Louisville. "We knew we were going to have to find different ways to be good, but we probably had even higher expectations and are definitely nowhere near our big goals yet."

The Tar Heels (26-5, 16-2) have been rolling since mid-January, when they suffered their worst home loss under Roy Williams against Louisville. The 69-61 loss to the Cavaliers on Feb. 11 stands as their only stumble since.

"The one game we lost was to one of the best teams in the country," UNC senior Luke Maye said. "I think that shows a lot of how we fight and how we play and how we know how to win games. I think that's shown a lot of growth for our team and I think we're only going to get better."

As for the Blue Devils (26-5, 14-4), they've played nearly six full games without Williamson since he went down early in the first of two losses to UNC. Coach Mike Krzyzewski said Williamson got in good practice workouts without contact last week and said that he expected the 6-foot-7, 285-pound national player of the year candidate to start contact work this week.

"They've shown that when they're together, they're very good," Krzyzewski said after Saturday's loss to the Tar Heels. "And we've been good, not real good, without Zion. The kids have fought, but it's inconsistent. It's not at the level that's needed to win a championship.

"If Zion is healthy and whatever, we'll have a chance."

Some other things to know about this week's ACC Tournament in Charlotte:

Behind Virginia and UNC, No. 12 Florida State has been the league's hottest team. Leonard Hamilton's Seminoles (25-6) have won 12 of 13 games with the only loss coming at North Carolina on Feb. 23. FSU claimed the last double-round bye into Thursday's quarterfinals.

No. 16 Virginia Tech (23-7) has had to grind it out with point guard Justin Robinson sidelined with a foot injury since late January. Things likely won't get easier this week, with coach Buzz Williams saying after Friday's win against Miami that Robinson won't play in Charlotte. The fifth-seeded Hokies own a bye into Wednesday's second round.

Sixth-seeded Syracuse and seventh-seeded Louisville look solid for NCAA Tournament bids, but Wednesday's second-round game between eighth-seeded North Carolina State and ninth-seeded Clemson could be an elimination game. The Wolfpack won the only meeting in January on Braxton Beverly's last-second 3-pointer.

The ACC opens play with Tuesday's first round with three games featuring the bottom six seeds. None own a winning record.

No. 12 seed Miami and No. 13 seed Wake Forest play the tournament's first game, followed by No. 10 seed Georgia Tech against No. 15 seed Notre Dame. The final game is No. 11 seed Boston College against No. 14 seed Pittsburgh.

The Eagles' 14-16 record is the best of the bunch. Compare that to previous two years, when the first day featured at least three teams with winning records and one NCAA Tournament team each time.

The tournament has long made North Carolina its home, though that has changed as the league expanded its footprint up the eastern seaboard and grew to 15 teams.

The ACC has held 51 of 65 tournaments in the state where it was founded, the last in 2015 in Greensboro where the league is headquartered. The tournament moved to the nation's capital in Washington in 2016 followed by two years in Brooklyn — marking the first time the ACC Tournament had spent more than a year out of the state of North Carolina.