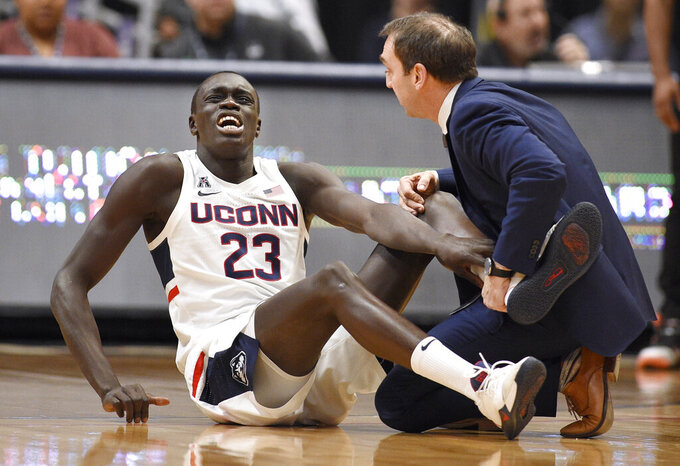 Connecticut's Akok Akok (23) reacts while tended to by head trainer James Doran in the first half of an NCAA college basketball game against Memphis, Sunday, Feb. 16, 2020, in Hartford, Conn. (AP Photo/Jessica Hill) 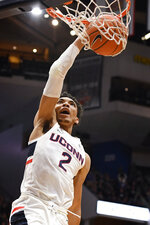 Christian Vital scored 18 of his 23 points in the second half as Connecticut overcame what appeared to be a serious leg injury to forward Akok Akok to beat Memphis 64-61.

James Bouknight added 17 points for Connecticut (14-11, 5-7 American), which has won three of its last four.

Vital and Bouknight combined to score 29 of the Huskies 39 second half points.

“I think that we're turning that corner,” said Vital. “Guys are believing with each game that we are starting to win.”

Precious Achiuwa and Tyler Harris each had 16 points for Memphis (17-8, 6-6), which led for more than 25 minutes in the game, but could not put UConn away. Achiuwa also pulled down 13 rebounds, but hit just seven of his 22 shots.

The teams were tied at 25 at halftime and Memphis scored the first five points of the second half.

A 3-pointer by Vital from the right baseline tied the score at 41 midway through the half, and his two foul shots with just over five minutes left gave the Huskies a 49-47 lead.

A 3-pointer by Harris with two seconds left pulled the Tigers within a point at 62-61.

But Vital sank two free throws and Alex Lomax missed a desperation heave from beyond half court at the buzzer.

UConn lost Akok 58 seconds into the game when he went down with what the school said appears to be a torn left Achilles tendon after blocking a shot for the 66th time this season.

The 6-foot-9 freshman could not put any weight on the leg as he was helped off the court and returned to the bench wearing a medical boot.

“We just won this game for him,” Bouknight said. “He's tough. He's a warrior and he's going to be good. I can't wait for him to get back.”

With Akok out of the game, Memphis ran out to a 10-4 lead. They led 20-13 with just over seven minutes left in the half, but scored just five more points before intermission.

Memphis has lost three straight, including a heartbreaking 92-86 setback in overtime at Cincinnati on Thursday.

“I like the direction we're heading, we've just got to learn to finish games,” Memphis coach Penny Hardaway said.

PLAY OF THE GAME

With the Huskies up 52-50, Vital stole a pass from Alex Lomax. He threw the ball off a Memphis player on the sideline then jumped back inbound, grabbed the ball and found Bouknight down the court for a dunk over Achiuwa and free throw that gave the Huskies a 55-50 lead with 3:05 left.

“Coach talks about making plays all the time," Vital said. “And Bouk really highlighted it. He's the one who made it a play by dunking on Precious like that. It was a good play for us.”

UConn had 17 second-chance points, outscored Memphis 18-8 on the fast break and scored 19 points off 16 Memphis turnovers.

“It still comes down to the hustle plays,” Hardaway said. “The second-chance points and the points off turnovers are the area that sticks out most and that's all that we worked on.”

This was the last scheduled trip by Memphis to Hartford, with the Huskies leaving the American Athletic Conference for the Big East at the end of the season. The teams are tied 8-8 after splitting their two meetings this season. Memphis won 70-63 in Tennessee on Feb. 1.

UConn hit just one of its first 15 attempts from behind the arc and finished 4 of 23. The Huskies came into the game shooting 33% from 3-point range.

Josh Carlton had a season-high 13 rebounds and Isaiah Whaley blocked six shots for the Huskies.

UConn travels to Philadelphia to take on Temple on Thursday night.